Zenfox T3 3CH Dash Cam review: Three cameras give you more to like 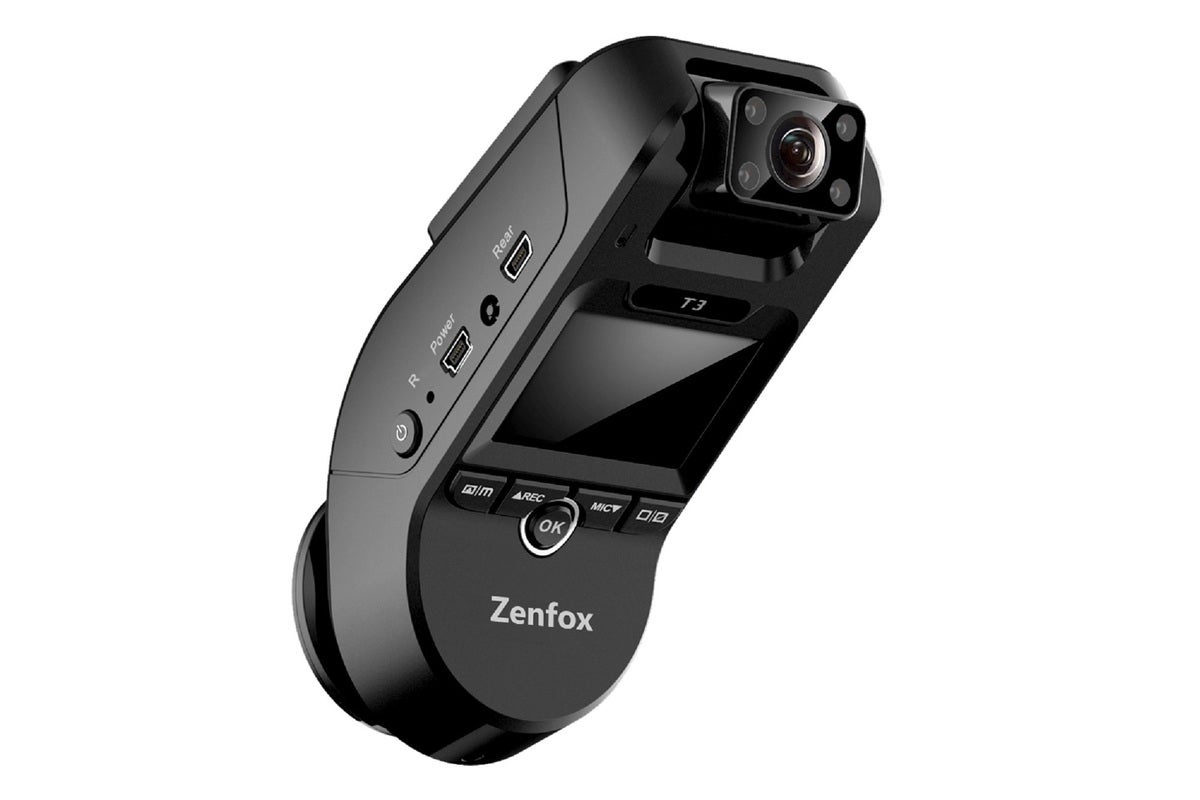 The $250 Zenfox T3 three-channel dash cam covers action to the front, rear, and inside of your car. It’s large for a dash cam, which makes it super-easy to handle, set up, and use. In fact, it’s one of my favorites in that regard.

However, the size and the placement of the interior camera mounted far up the body unit forces some interesting decisions on where to place the unit. It’s not a deal-killer, but it warrants consideration.

This review is part of our ongoing roundup of the best dash cams. Go there for information on competing models and how we tested them.

As I mentioned, the T3 is no demure mini-dash cam, measuring approximately 5.5 x 2 x 2 inches, including the protruding front camera. Such a copious body allows large buttons and easy-to-read labels, a welcome difference compared to the tiny stuff you find on the average dash cam. The nicely thought-out menus seal the deal.

But it’s not so much the size of the T3 that causes issues, but the location of the interior camera at the top of the unit, as you can see in the image below.

Depending on where your rear-view mirror is, this might poke out above it. In my small vehicle there was just no way to provide the interior camera with an unobstructed view without putting it very low on the windshield, where it obstructed my vision for driving. It was usable, but I was a little worried about being pulled over for not being able to see around it. That’s the law.

Granted, I drive a diminutive Mazda Miata convertible. Most users with larger windshields will simply slide it a bit to the side and do just fine. Just be aware of these design aspects when you consider it.

There are lots of reasons to consider it. The T3 features internal GPS that automatically configures settings. It has a parking mode where the camera will wake to distrubances detected by the G-sensor, as well as time-lapse recording. An app connects via Wi-Fi for video transfer and playback. The app is nicely laid out, and makes it a breeze to adjust settings. The phone will beep when connected.

Note that both the rear camera and power port are USB-mini types. They’re clearly labeled, but don’t confuse them.

The T3’s front, interior, and rear video are all very good. The reason I’m not saying excellent or outstanding is that the images don’t show quite the clarity that I’ve seen from other cameras, including the recent Vava VD009, which captures the same 2560×1440 to the front.

The degradation is likely due to the amount of compression being used, though optics can cause the same phenomenon. This is not really a knock on the T3, but an homage to some of great cameras. As you can see in the captures below, very good is still very good.

While the day capture up top may seem a bit dark, that’s largely due to the smoke in the air from the California wild fires from late 2020.

The front night captures, shown below, are good, but seemed to lose more fine detail than the daytime captures.

Rear night captures showed decent detail as well. The capture below is illuminated by my car’s backup lights. Normally, the amount of light in captures will be closer to the front captures shown above, with my headlights off.

Interior night captures, such as the one shown below, are largely well lit thanks to four infrared lights surrounding the camera.

Note that the interior night capture above was from a replacement T3—the infrared was not working on the original. Check your night interior captures before you throw away the receipt.

Largely thanks to its size the T3 runs cool, but it opts for a super-capacitor rather than a battery. That’s enough to save video that’s just been taken, but it doesn’t provide any run time should the power in the car fail due to damage (an unlikely occurrence).

The Zenfox T3 three-channel does a very good job of capturing detailed, colorful video. It’s actually my favorite dash cam in terms of setup and use. The placement of the interior camera might be an issue in smaller cars. Take a good look at both the T3 and your interior and decide if it’s something you can work with. If you do, you’ll like using it.

The $200, two-channel version I mentioned up top will save you money and makes more sense for vehicles with obstructed rear vision. (Semis, closed vans, etc.)

r/dankmemes – Please no, my eyes!

Google, Salesforce, and Microsoft are having mixed results in building statewide…