‘You have to wear the consequences of your actions’ 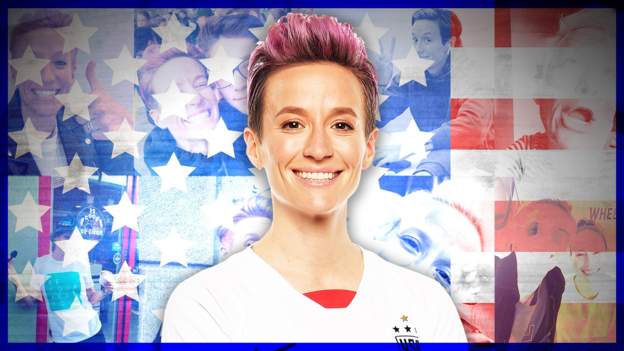 Megan Rapinoe is a two-time World Cup winner, an Olympic gold medallist and the winner of the Ballon d’Or. She is also one of the most influential voices in sport.

The American has consistently spoken out about racism, sexism and homophobia and has been a leading voice in the campaign for equal pay for the United States women’s team.

In 2016, Rapinoe became the first white American athlete to take a knee during the national anthem in a show of solidarity with Colin Kaepernick.

However, that decision – a gesture of protest against racial inequality and police brutality – left her feeling as though her international career was in jeopardy.

BBC Sport spoke to the 35-year-old about protest, white privilege and the global development of women’s football.

On taking a knee

Rapinoe writes in her autobiography, One Life, about the lack of support she received from US Soccer and then-coach Jill Ellis when she took the knee for the national anthem.

“I’m proud of it, to be honest. I’m proud of speaking my mind and doing the right thing. I feel this is how change is made.

“Any time I have someone try to explain or argue with me about kneeling or arguing, it’s just an incoherent, fumbling, patriotic mess, right? Taking a knee sharpened my understanding of what I did, how I supported Colin and sharpened my resolved in that.

“It was not a comfortable time. I certainly felt that at least my international career was a little bit in jeopardy.

“It showed me a lot of true colours around me in a lot of different ways. The critics yell really loud and I had a federation who clearly didn’t support me and, I felt, a coach who really didn’t support me, but I had so many people around me who always stuck by me and were with me the whole time.

“But you have a choice of what you do in the world. You just have to be prepared to wear the consequences of your actions.”

On more white athletes speaking out

For Rapinoe, white athletes should use their platform to give others a voice.

“We don’t speak out because we are privileged and we don’t have to. It comes in part from a lack of examination of your own life and the world around you.

“For white people and probably white men in general, they don’t really have to analyse the world around them to be successful. For example, if you’re gay, you’re constantly traversing a heteronormative world.

“While it is not necessarily people’s fault – people that were born now didn’t create the country the way it was created – that doesn’t mean you don’t have a responsibility to it.”

On what being a public figure means to her

“I hope us just living our lives the ways that we do, can start to show how positive it can be, not just for us, but for society and the health for us.”

On the future of women’s football

The 2020 National Women’s Soccer League season was postponed in America because of the coronavirus pandemic, with a number of World Cup winners coming to England to play in the WSL.

“I think women’s football in England is the same as in America – it is so far behind because of what we’ve had to overcome in the lack of investment.

“It’s 2020. How long has the Premier League been around? And we’re only just seeing a club like Manchester United put effort and pounds towards a women’s team? Frankly, it’s disgraceful.

“I’ve had a few team-mates go abroad and play, while I’m training and trying to keep fit in the hopes that eventually we’ll be out of this hellscape.

“I want to keep playing. I’m definitely not anywhere near retirement – I absolutely want to play at the Olympics.

“After the Olympics I’ll have to take a longer look at the next three years. We’re a year closer to the next World Cup and it’s pretty enticing. We’ll leave that one out in the open…”