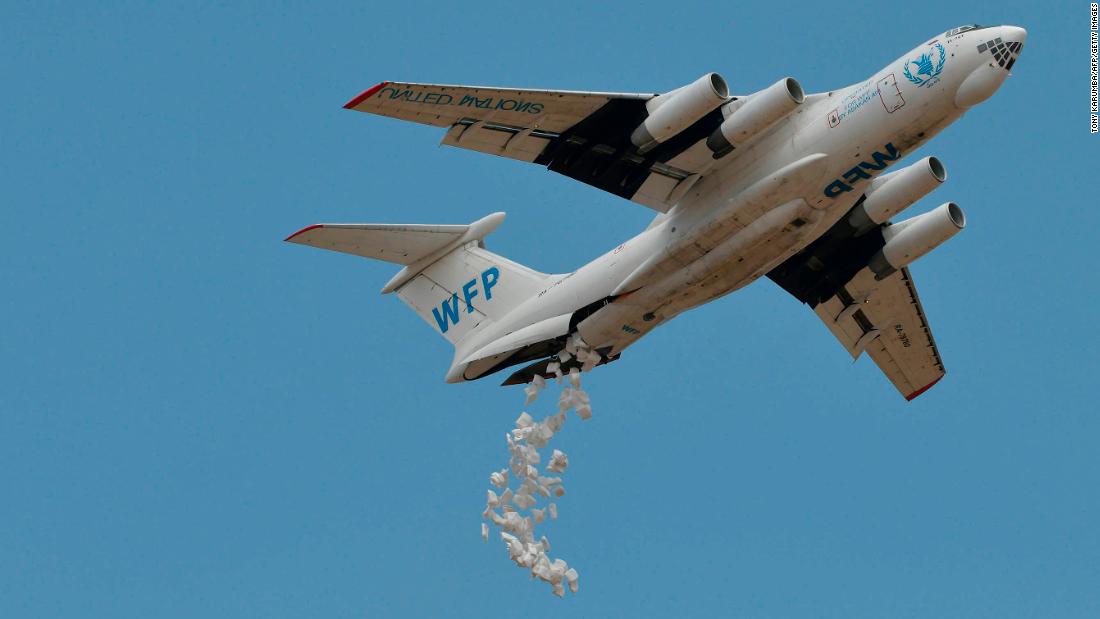 In awarding the prize, committee chair Berit Reiss-Andersen noted the impact of the coronavirus pandemic on global food supplies and criticized the politics of populism.

The WFP, a United Nations entity, was created in 1961 and today provides food to over 100 million people a year.

The organization tweeted its “deepest thanks” for the honor, adding: “This is a powerful reminder to the world that peace and #ZeroHunger go hand-in-hand.”

It praised its staff who it said “put their lives on the line every day.”

Executive director David Beasley reacted with joy to the news of his organization’s Nobel win. “It’s the first time in my life I’ve actually been speechless, I really can’t believe it,” he told CNN’s Connect the World from Niger.

He said that the award was a “call to action,” urging people to “step up and step up now.”

“Where there’s starvation there’s conflict, destabilization and migration,” he said, adding that the world was now experiencing “all of those things coupled with Covid.”

Beasley warned there were “possibilities of famines of biblical proportions,” calling for billions of dollars in additional aid to save people around the globe.

“We’re looking for a vaccine for Covid; we have a vaccine for hunger — it’s called food, and we have the food. We need the money and the access to solve it,” he added.

Tedros Adhanom Ghebreyesus, the director of the World Health Organization, which was itself tipped as a frontrunner for the award, praised the decision on Twitter. “Huge admiration and respect for the life-saving work you do for people in need everywhere,” he wrote.

Tunisian actress Hend Sabry, a WFP ambassador, said she was “proud” of her role and wrote that the organization “is mainly a web of wonderful people from all around the world, doing their best to fight hunger.”

The Norwegian Nobel Committee said the need for international solidarity and multilateral cooperation was more conspicuous than ever. It said it wanted to turn the eyes of the world towards the millions of people who suffer from or face the threat of hunger.

“The coronavirus pandemic has contributed to a strong upsurge in the number of victims of hunger in the world,” said Reiss-Andersen.

“In the face of the pandemic, the World Food Programme has demonstrated an impressive ability to intensify its efforts.”

“As the organization itself has stated: until the day we have a vaccine, food is the best vaccine against chaos,” Reiss-Andersen added.

Dan Smith, the director of the Stockholm International Peace Research Institute, told CNN he saw the decision as “positive.”

“There’s an urgency to the issue at the moment, because after decades of progress, world hunger has started to rise in the last four years, driven primarily by climate change,” he said.

“In addition, the number of conflicts in the world is also on the increase,” Smith added. “So I worry that the workload for the World Food Programme is only going to increase in the next two to three years, so I think this is a very timely way of bringing attention to the work that they do.”

The Nobel Peace Prize is one of the most prestigious in the world and recognizes those who have contributed the most towards ending conflict, promoting peace and building relationships between nations. This year’s award carries particular significance in a period dominated by division, economic woes and a global pandemic.

The combination of conflict and the pandemic has led to a dramatic rise in the number of people living on the brink of starvation in countries including Yemen, the Democratic Republic of Congo, Nigeria, South Sudan and Burkina Faso. The WFP has combined humanitarian work with peace efforts in South America, Africa and Asia.

“The prize is for international cooperation, which is badly needed,” Henrik Urdal, the director of the Peace Research Institute Oslo told CNN. “It’s a prize that underscores the link between armed conflict and hunger, and it’s a prize which speaks to one of the great challenges of our time, which is the increasing number of refugees worldwide.”

Urdal said he thought the decision would be “welcomed internationally.”

US President Donald Trump, who was also nominated for the award, may not have won but could be happy with the result, suggested Urdal, as Beasley, the former Republican governor of South Carolina, had supported him during his 2016 campaign.

“And I think that the Nobel Peace Prize started its announcement with a reference to solidarity and multilateralism as a kind of gentle rebuke to the leaders of the great powers, including Donald Trump, obviously Putin and President Xi as well,” Smith said.

Reiss-Andersen made a pointed rebuke of populism as she answered questions from journalists about the award of the prize.

“When you follow international debate and discourse, it’s definitely a tendency that international institutions seem to be discredited more than, let’s say, 20 years ago,” she said.

“It is part of populism that it has nationalistic flavor … everybody, every nation, supporting their own interests.”

“When the UN was founded, it was exactly on a great emphasis on the universalism of the world,” Reiss-Andersen added. “There also is a universal responsibility for the conditions of human mankind.”

“If you ask anybody within the UN system, they will claim that it is harder these days to get the necessary financial support for the different activities of the different agencies,” she said.

The WFP has suffered from a drop in contributions in recent years, as countries including the United States lower funding for global organizations.

In 2017, Beasley wrote: “This is my message to President Trump and his friends and allies. Proposed massive cuts to food assistance would do long-term harm to our national security interests.”

This year’s prize comes at the end of a fascinating week of Nobel announcements, which included the Nobel Prize for Literature going to US poet Louise Glück on Thursday.
The Nobel Prize for Chemistry was awarded to Emmanuelle Charpentier and Jennifer A. Doudna for discovering the CRISPR/Cas9 gene editing tool for “rewriting the code of life.”
The Nobel Prize in Physics went to Roger Penrose, Reinhard Genzel and Andrea Ghez for their discoveries about black holes.
And the Nobel Prize in Medicine was awarded to Harvey J. Alter, Michael Houghton and Charles M. Rice for the discovery of hepatitis C virus, which led to the development of tests and treatments.

This breaking story has been updated with additional reporting.

27 ‘Animal Crossing’ Tips to Up Your Island Game