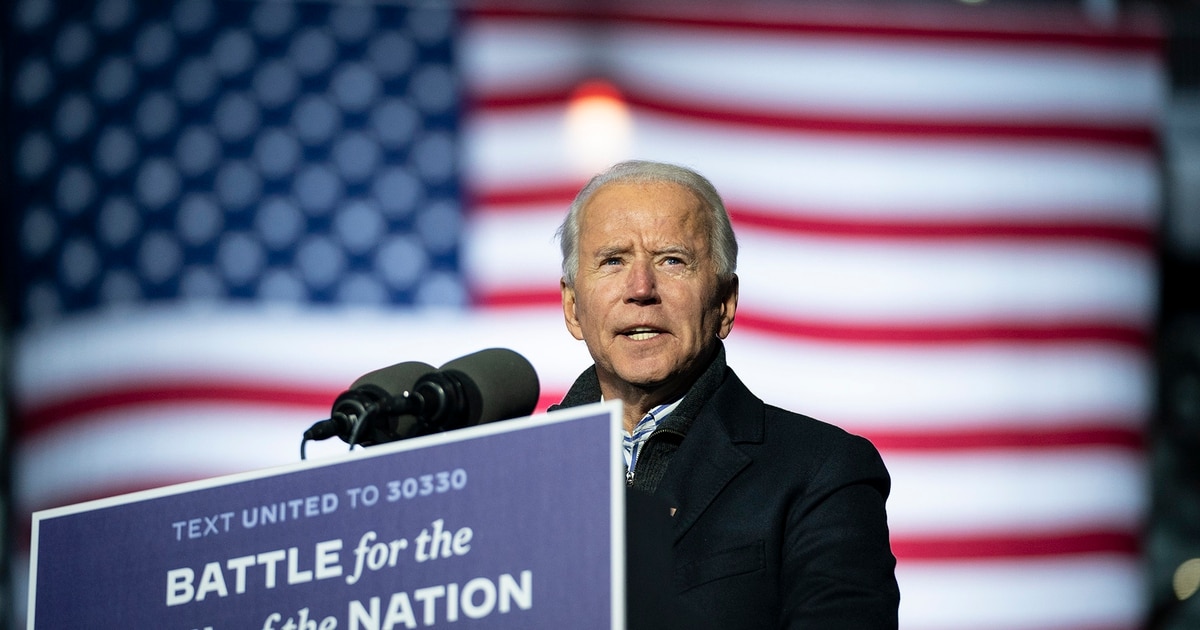 Biden, who was elected to the Senate exactly 48 years ago to the day he was named winner of the presidential election, is no stranger to international leadership and has a long track record on international relations and national security issues. Here are a few of his selected positions and how they differ from Trump.

The defense budget: Biden has said that Trump “abandoned all fiscal discipline when it comes to defense spending,” and while he doesn’t foresee major U.S. defense cuts if elected, he will be facing pressure from the left to scale back. To affordably deter Russia and China, Biden said he would shift investments from “legacy systems that won’t be relevant” to “smart investments in technologies and innovations — including in cyber, space, unmanned systems and artificial intelligence.” He also wants to boost neglected nonmilitary investments, such as “diplomacy, economic power, education, and science and technology.”

Personal relationship to the military: Biden, a Blue Star father whose son deployed to Iraq while he served alongside President Barack Obama, made national unity and international cooperation key tenets of his campaign, along with a vow to better handle the ongoing coronavirus pandemic which has killed more than 250,000 Americans. In recent weeks, he also promised better treatment and more respect for troops and veterans, arguing that Trump has dismissed and devalued their sacrifices through his actions in office.

Afghanistan, Iraq and Iran: Biden has vowed to bring U.S. combat troops home from Iraq and Afghanistan, likely leaving residual counterterrorism forces. His camp favors small-scale operations (maybe led by special forces) rather than large, open-ended troop deployments, which he agrees would require the informed consent of the American people. Biden, who voted for the Iraq War when he was a senator, said during the recent campaign that he played a key role in the Obama administration’s drawdown of 150,000 U.S. forces from Iraq. On Iran, he said he would commit to preventing the country from acquiring a nuclear weapon, offer a diplomatic path while maintaining targeted sanctions, and work closely with Israel to ensure the American ally can defend itself against Iran and its proxies.

NATO and Europe: Biden and his advisers have drawn a contrast with Trump, pledging to rehabilitate frayed alliances. Biden hit Trump for straining relations between the U.S. and Europe. He said the next president must “salvage our reputation, rebuild confidence in our leadership, and mobilize our country and our allies to rapidly meet new challenges,” pledging that he would “take immediate steps to renew U.S. democracy and alliances, protect the United States’ economic future, and once more have America lead the world.” Biden plans to review troop movements out of Germany if he takes office, according to a top foreign policy aide.

Arms control: Favored by arms control advocates, Biden has promised to renew New START and would likely accept Russia’s offer to extend it five years without preconditions. He also said he would rejoin the Iran nuclear deal if it returned to full compliance described in the agreement. While Trump has loosened restrictions on the use of landmines by the U.S. military in conflict areas, Biden has said the move unnecessarily puts civilians at risk and that he would reverse it.

Nuclear weapons: Biden has signaled he would scale back Trump’s buildup of the nuclear arsenal. The Democratic nominee for president is opposed to the W76-2 and an SLCM. Biden would face pressure from the left to drop plans to build a new nuclear intercontinental ballistic missile force, replacing the Minuteman III fleet fielded in 1970, though he has not announced a position on it. Biden said he would review a policy reserving the option of using nuclear weapons first.

Weapon sales: While Biden hasn’t made his views clear about arms sales overall, he said he would end U.S. military and other support for the Saudi-led war in Yemen. As he reassesses the U.S.-Saudi relationship, he would end weapon sales to Riyadh (which has historically been the top partner for U.S. military sales). “We will make clear that America will never again check its principles at the door just to buy oil or sell weapons,” Biden said. On firearm exports, his campaign said he may reverse a Trump administration rule that moved jurisdiction from the State Department to the Commerce Department. One thing to watch: will a Biden admin go through with the sale of F-35s to the UAE, which has drawn opposition from Democrats in Congress?

Great power competition: While in the Senate, Biden pushed for better relations with China through increased commercial ties. But he now views China as “the greatest strategic challenge to the United States and our allies in Asia and in Europe,” one of the few areas in which he and Trump agree. Biden has called Chinese President Xi Jinping a “thug” and pledged “swift economic sanctions” against China if it tries to influence American companies or citizens. While Trump has bragged about having a good relationship with Russian President Vladimir Putin, expect a different tone from Biden should he occupy the White House. The former vice president has described Trump as “subservient” to Putin,” and has talked about telling Putin directly: “I don’t think you have a soul.”