What we still don’t know about Beirut’s port explosion 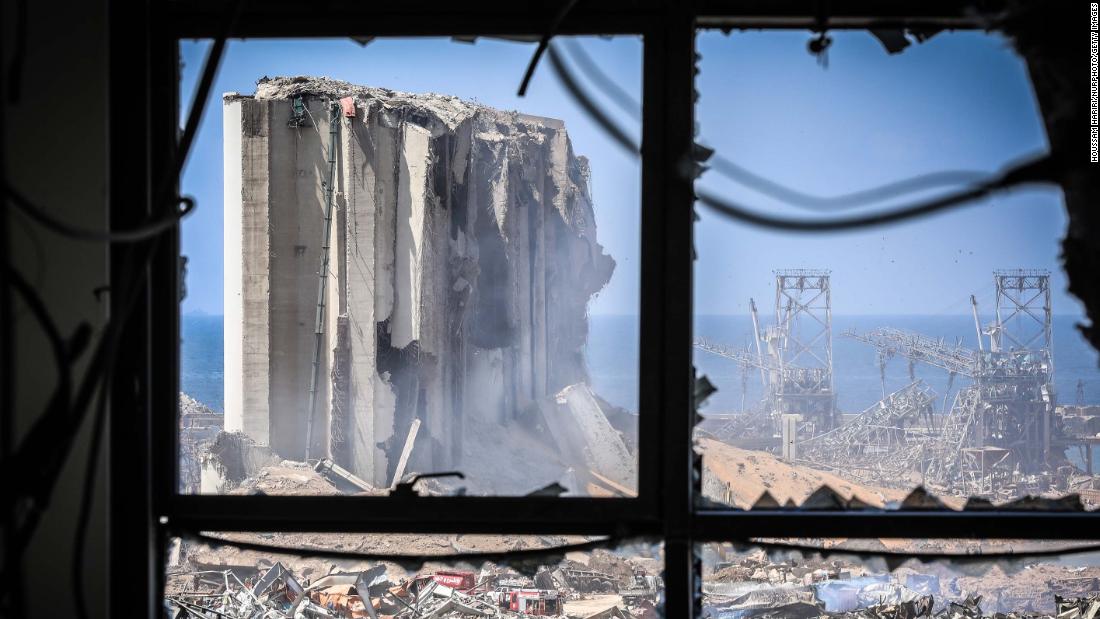 On any given day in Beirut’s worst-affected neighborhoods, theories about the explosion still circulate. No two stories of human tragedy are alike, and most interactions between people here end not with a goodbye, but with an invocation that Lebanon’s ruling elite be toppled.

At just after 6 p.m. on August 4, 2020, hundreds of metric tons of ammonium nitrate ignited, sparking the massive blast in the city’s port.

The industrial chemicals had been improperly stored there for years due to the failure to act by successive governments and lawmakers across the political divide. That much is clear.

But for people across Lebanon, there are still many unanswered questions about what led to the tragedy, and there has been no sense of closure in the 12 months since the explosion.

Here’s what we still don’t know.

What triggered the blast?

Because of the many inquiries by journalists and rights groups over the past year, we know that the ammonium nitrate — stored alongside fireworks in a poorly maintained warehouse — was a disaster waiting to happen.

Six urgent letters sent by customs officials since 2014 — the year the material was unloaded at the port under mysterious circumstances — had alerted the authorities to the danger posed by the chemicals.

One was written by a port official in May 2020, just months before the blast. “This substance, if ignited, will lead to a large explosion, and its outcome will almost obliterate the port of Beirut. If the substance were exposed to any kind of theft, the thief would be able to use this substance to build explosives,” warned the document, which was obtained by CNN after the incident.

Beirut’s port is just 100 meters from some of the city’s most densely-populated neighborhoods. The blast destroyed not only a large part of the port, but also left swathes of the city in tatters. The damage was estimated at between $3.8 and $4.6 billion.

It is clear that successive leaders — four governments and three prime ministers — either would have or should have known about the threat posed by the material, and that little was done to address the danger.

But what is far from clear, 12 months on, is what ignited the ammonium nitrate.

According to a report by Human Rights Watch, Tarek Bitar, the judge charged with investigating the explosion, is looking into several theories.

One is that sparks from welding works that day caused a fire in hangar 12, the warehouse where the chemical was being stored.

Another is that an Israeli strike was the catalyst, though Lebanese aviation officials reported that local radar systems did not detect military aircraft over Lebanese airspace in the hour or so before the blast, Israeli officials have denied any involvement, and Bitar himself has said the Israel theory was highly unlikely, according to HRW’s report.

Bitar is also exploring the theory that the explosion was an intentional act, according to HRW.

“Speculation that Hezbollah may have wanted to destroy the ammonium nitrate at the port supposedly to hide that some of the ammonium nitrate in the stockpile had been used by Hezbollah’s ally Bashar al-Assad in Syria to produce barrel bombs increased as reporting emerged regarding the connection between the cargo owners and individuals sanctioned by the US for alleged links to Assad,” the report said, referring to an investigative report by local journalist Firas Hatoum.

Hatoum linked the shipment of ammonium nitrate — which that arrived in 2013 and was unloaded the following year — to companies linked to, according to the HRW report, Syrian-Russian businessmen “who have been sanctioned by the US government for acting on behalf of the Syrian government of Syrian President Bashar al-Assad.”

Hezbollah has repeatedly denied involvement in the blast.

Several Lebanese factions were heavily involved in Syria’s civil war earlier in the conflict. Affiliates of Lebanon’s Saudi-backed former prime minister, Saad Hariri, materially aided anti-Assad forces for a time. Hezbollah intervened on Assad’s behalf and is widely believed to have helped save his presidency.

Adding to the mystery around the ammonium nitrate is the fact that all of Lebanon’s major political parties have a strong presence at the port.

“Lebanon’s main political parties, including Hezbollah, the Free Patriotic Movement, the Future Movement, the Lebanese Forces, the Amal Movement, and others, have benefited from the port’s ambiguous status and poor governance and accountability structures,” the HRW report said.

“Political parties have installed loyalists in prominent positions in the port, often positioning them to accrue wealth, siphon off state revenues, smuggle goods, and evade taxes in ways that benefit them or people connected to them,” it added.

Was any ammonium nitrate missing? What happened to it?

The judicial investigation’s third theory, that the ignition was an intentional act, has gained prominence over the past year.

Several reports have suggested that far less ammonium nitrate exploded last August than initially thought. According to Reuters, an FBI report estimated that only 20% of the 2,755 tons of ammonium nitrate brought to the port in 2013 actually detonated. The HRW report also cited an August 2020 investigation by the Organized Crime and Corruption Reporting Project in which three European intelligence sources estimated that the size of the blast was equivalent to as little as 700- 1,000 tons.

The theory goes that the ammonium nitrate was left at the port, where it could be siphoned off by factions in Lebanon.

Caretaker Prime Minister Hassan Diab told CNN he only found out about the existence of the ammonium nitrate in early June 2020, and immediately requested further information. He said he received a file on the situation at the port on July 22 — but that the part predicting the catastrophic effects of an explosion had been omitted.

Diab said he forwarded the file to the Ministry of Public Works, under whose purview the port falls, and the Ministry of Justice, and asked them to investigate the chemicals at the port.

CNN has seen a document showing that the Ministry of Public Works stamped the front of the file on August 4, 2020.

In a December 2020 interview with CNN, Diab — by then the country’s caretaker Prime Minister — called the timing “suspicious.”

How will Beirut rebuild?

Perhaps one of the most glaring unanswered questions surrounding the Beirut port explosion is whether the city will ever go back to what it was.

Since the blast, the city has buckled under the strain of a rapidly plummeting currency, long power outages, and severe medicine, milk and fuel shortages. Lebanon’s dire economic straits mean most of the rebuilding efforts have been privately funded, or supported by non-profit organizations. A year later, much of the repair work is still ongoing.

But many home and shop owners say they neither have the financial means nor the psychological strength to return to affected neighborhoods.

“They’ve ruined us. I’d sell my soul to leave this country,” said one shop owner on the once hip but still extensively damaged Gemmayze street, referring to the country’s ruling class. “May they never again see a good day.”