What Happens to Some L.G.B.T.Q. Teens When Their Parents Reject Them 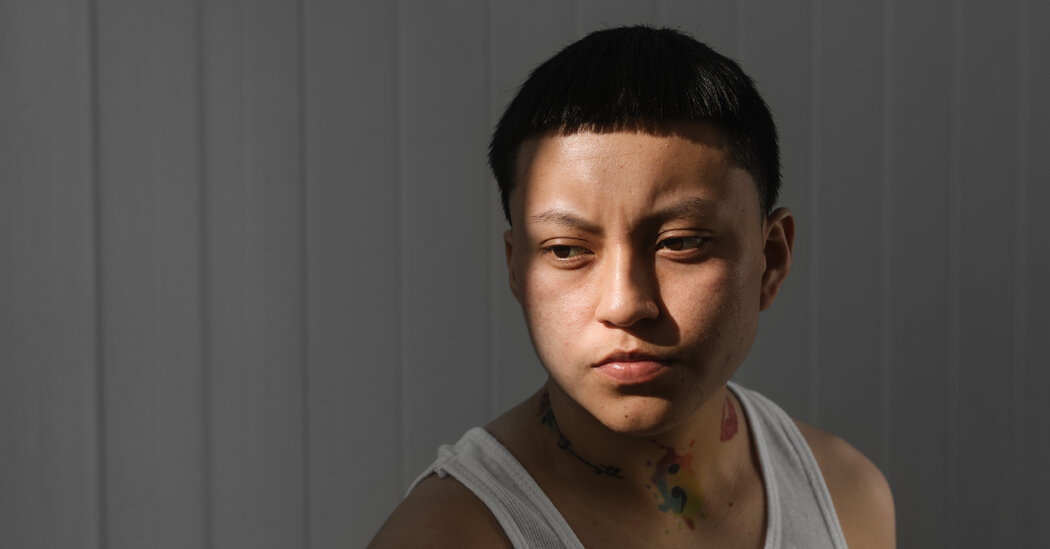 A teenage girl from Brooklyn bounced to four foster homes before she trusted a family enough to come out as bisexual. In Queens, a 21-year-old transgender man said he no longer spoke to his parents.

Another teenager, who is transgender, remembered the day he climbed to the roof of his apartment building in Queens and contemplated jumping to his death. Soon after, he was placed into a foster home.

Some advocacy groups have long believed that gay, bisexual and transgender teenagers are overrepresented in the city’s foster care system, and that many struggle to find support in it and at home. A new survey has confirmed that impression: It found that more than a third of New York City’s young people in foster care identify as L.G.B.T.Q.

The survey, published on Tuesday by the Administration for Children’s Services, the city’s child welfare agency, revealed disparities between the L.G.B.T.Q. youths and their peers in foster care. The young people who identify as L.G.B.T.Q. are placed more often in group homes or residential care, instead of family-based homes. They also are more likely to report experiencing homelessness, negative interactions with the police, and feelings of depression and hopelessness.

The agency said it had used the survey’s findings to develop a plan to decrease the number of L.G.B.T.Q. youths in the system, increase placements with relatives and foster families, and improve the young people’s overall well-being. In New York City, children can stay in foster care into adulthood, transitioning once they find stable housing.

“Without that data, in a sense, we’re doing program and policy planning in the dark,” said David Hansell, the agency’s commissioner. “We can only do good planning to meet the needs of youth in foster care if we really understand what those needs are.”

For years, foster care agencies in New York City have lacked the data to assess L.G.B.T.Q. youths’ needs or analyze their own shortcomings. Nationwide data on L.G.B.T.Q. teenagers in foster care is scarce.

While there is no federal data for comparison, the Annie E. Casey Foundation, a philanthropy for underprivileged children, has found that about 24 percent of young people being served by a foster care initiative it has in 17 states identify as L.G.B.T.Q.

The New York City survey is “a very targeted focus on a population that we usually don’t see in child welfare,” said Sandra Gasca-Gonzalez, vice president of the Annie E. Casey Foundation’s Center for Systems Innovation.

Theo Sandfort, a professor at the Columbia University Vagelos College of Physicians and Surgeons, analyzed the findings of the telephone survey, which was completed in late 2019. People ages 13 to 20 who were in foster care answered questions about their gender, sexual orientation, demographics, experiences in the system and well-being.

Nearly 2,400 people were contacted, and 659 responded. About 34 percent of the respondents said they were L.G.B.T.Q.

While some children are placed into foster care because of abuse, neglect or poverty, many L.G.B.T.Q. teenagers enter the system after their families reject them.

Jonathan DeJesus, the 21-year-old man who said he no longer speaks to his parents, dreams of becoming a public speaker and an advocate for young people like him. Mr. DeJesus said he was first placed in foster care when he was 12, after experiencing domestic violence at home. Despite family therapy, friction continued once he identified as a lesbian.

“I started to dress masculine and everything, so it was just definitely out of the question for them,” he said, referring to his parents.

His first placement, at a residential treatment center in Westchester County, N.Y., was supposed to last a couple of months. Mr. DeJesus stayed for four years.

His experience was similar to that of other L.G.B.T.Q. youths who lingered in residential care and group homes. Mr. DeJesus said he was thriving in his current group home because it was L.G.B.T.Q. specific and aided in his transition.

Under the child welfare agency’s new plan, all staff members must attend two days of training. The agency will also recruit foster parents interested in caring for L.G.B.T.Q. youths, and L.G.B.T.Q. youths will join a current youth leadership council that advises the staff.

While the plan outlines solutions, the survey does not get to the root of the disparities. It does not, for example, explain why L.G.B.T.Q. youths are more likely to have more placements or more likely to be placed in group homes.

Mr. Hansell said the agency was planning to do further studies. Advocacy groups welcomed the new data as a positive step, though some were skeptical that the effort to improve services would be effective.

Lawyers for Children, a nonprofit legal group that represents children in foster care, has an L.G.B.T.Q. Rights Project. Linda Diaz and Kristin Kimmel, co-directors of the project, said they wished they had been included in devising the plan.

“It is very disappointing that at a really crucial juncture in the provision of services to L.G.B.T.Q. youth that A.C.S. is not consulting with us,” Ms. Diaz said.

Youth advocates could have offered valuable perspectives, Ms. Kimmel said. She added, for example, that the plan should make sure all foster parents — even those not specifically recruited to care for L.G.B.T.Q. youths — were trained to support children regardless of sexuality or gender expression.

“While A.C.S. has had a policy for quite some time that they’re going to train all of their foster parents, all of their agency caseworkers and everybody that provides services to these kids to be accepting of them, that really hasn’t come to pass,” Ms. Kimmel said. “There are plenty of foster homes that are rejecting of these young people.”

Destiny Simmons, 24, who was not part of the survey, said that moving from home to home often kept her from forming relationships.

“You don’t know when you’re going to be moved again,” Ms. Simmons, who is bisexual, said. “So, it’s like, why form a bond with this person when it could just be broken?”

Jamie Powlovich, executive director of the nonprofit Coalition for Homeless Youth, attributed the homelessness rate to rejection from family and community members, and a lack of secure housing. Surveys and plans were not enough, she said, and L.G.B.T.Q. youths must be involved in decision-making.

“I’ve never worked with a young person who didn’t know some really great answers,” she said. “It’s just that most people don’t listen to them.”

Andrés, a 19-year-old living in a foster home in the Bronx, knows the feeling of not being heard, wishing the city’s child welfare agency had acted sooner to remove him from his parents’ apartment.

About four years ago, Andrés, who did not want his surname used, came out as transgender. That kick-started family therapy, an intervention by the agency in hopes of keeping Andrés out of foster care. But he said his relationship with his parents could not be repaired.

“I’m not making any compromises,” he said, “because I’m not going to compromise myself for someone else.”

During a visit to Colombia, he said, his mother forced him to participate in what he described as an exorcism to change his identity.

“I’m locked in a concrete room with two men I’ve never met before in my life trying to pray the gay away,” he said.

When he returned to New York, his two brothers continued to support him. Still, he found himself on the roof of his apartment building considering suicide.

The child welfare agency then moved him from his home in 2016. Now, he said, he is in a better place.