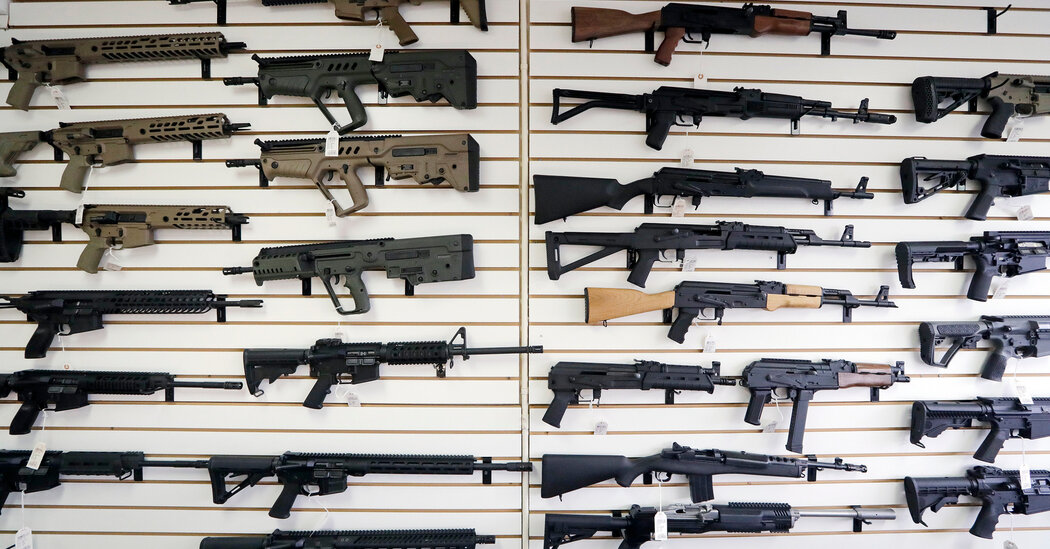 A West Virginia man was indicted on Tuesday on federal charges that he sold machine gun conversion devices to hundreds of people, including antigovernment extremists in the Boogaloo movement and the person accused of fatally shooting two law enforcement officers this summer in California, prosecutors said.

The man, Timothy John Watson, 30, of Ranson, W.Va., is accused of selling devices that, when attached to weapons like an AR-15 semiautomatic rifle, enable them to automatically fire more than one shot with a single pull of the trigger, prosecutors said.

Mr. Watson sold the devices online, according to prosecutors, and, in order to disguise their nature, described them as “wall hangers” meant to hold “keys, lanyards, hats, jackets, coats and other small items.”

According to a federal criminal complaint, Mr. Watson and his customers used coded language in emails, and messages on social media, indicating the devices were intended to turn weapons into machine guns.

Among Mr. Watson’s customers was Steven Carrillo of Winters, Calif., prosecutors said. Mr. Carrillo purchased a “Portable Wall Hanger — Single” through Mr. Watson’s website in January, they said. In May, the authorities said, Mr. Carrillo shot two security officers outside a federal courthouse in Oakland, killing one of them; in June, the authorities said, he shot two Santa Cruz County sheriff’s deputies, killing one of them.

An AR-15 rifle recovered at the Santa Cruz scene was linked to both shootings, according to federal officials. The weapon appeared “to be a Privately Made Firearm (PMF) with no manufacturer’s markings,” federal officials said in the criminal complaint against Mr. Carrillo.

Shawn R. McDermott, a lawyer for Mr. Watson, did not immediately respond to a telephone message Tuesday night.

But Mr. McDermott told United States District Court for the Northern District of West Virginia in a pretrial motion that “there is no evidence that the portable wall hanger was used in the shooting or in a weapon” by Mr. Carrillo.

Mr. McDermott also said his client “would reject any ideology that is based upon violence.”

“If Mr. Watson’s actual purpose was to get illegal weapons into the hands of extremists, he wouldn’t have made this information easily discoverable,” Mr. McDermott wrote. “He would have simply taken his business to the dark web, which would make it much harder for anyone to track it.”

In a statement announcing the indictment of Mr. Watson, Bill Powell, the United States attorney for the Northern District of West Virginia, said the defendant “appears to have supplied hundreds of people with these conversion devices, some to people who want to do Americans harm.”

“Federal law is very specific on these types of devices,” Mr. Powell added, “and the safety of the public from extremists is one of our highest priorities.”

Prosecutors said Mr. Watson specifically sought out members of the Boogaloo movement — a loosely knit affiliation of antigovernment extremists, some of whose members have violently clashed with law enforcement officials and peaceful demonstrators at George Floyd protests — to be his clients.

In March, his site advertised that it would donate 10 percent of its proceeds that month to a GoFundMe page for Duncan Lemp, who has been described as a “martyr” of the movement after he was fatally shot in his home in Potomac, Md., by local police officers that month, prosecutors said.

Also, a member of the Boogaloo movement told federal officials that he had learned about Mr. Watson’s site after seeing it advertised on Facebook Boogaloo groups, prosecutors said.

If convicted, he faces up to five years in prison on the conspiracy charge and up to 10 years in prison for each of the other three charges, prosecutors said. Mr. Watson was arrested in September and remains in custody.