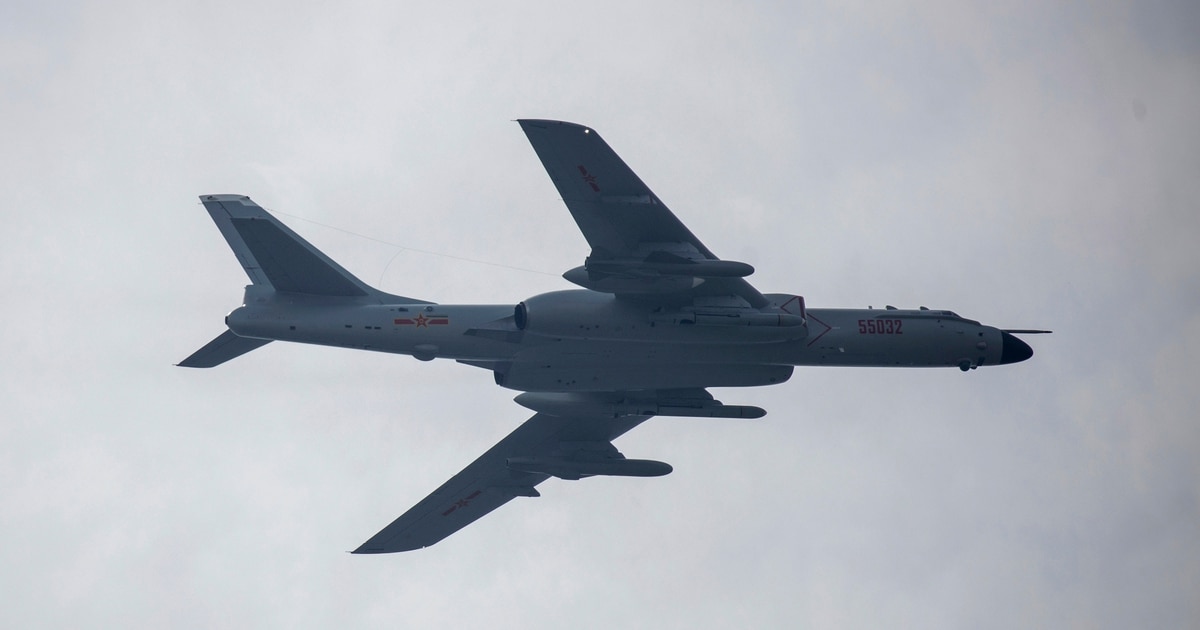 MELBOURNE, Australia — The air-launched ballistic missile that China has reportedly been developing appears to be a hypersonic warhead boosted by a conventional rocket.

A video that surfaced over the weekend online shows a Xian H-6N bomber of the People’s Liberation Army Air Force landing at an airfield carrying a payload on the bottom of its fuselage. The footage confirms earlier analysis that this latest variant of the bomber is capable of carrying a missile semi-recessed into its fuselage.

Despite the video’s low quality, a freeze-frame analysis by Defense News suggests the payload is a missile with a warhead and booster section that closely resembles the ground-launched DF-17 hypersonic missile, which is believed to use the booster section from a DF-16 medium-range ballistic missile combined with a DZ-ZF hypersonic glide vehicle as its warhead.

In 2018, the U.S. Department of Defense said in its annual report on China’s military power that the Asian country was developing a nuclear-capable, air-launched ballistic missile, or ALBM, giving it the designation CH-AS-X-13. However, it is unknown if the payload seen in the video is the ALBM.

It’s also unclear how far along China is in development of the hypersonic glide vehicle, though the video would suggest that it has at least reached the captive carry stage. This involves the aircraft platform carrying a mock-up of the payload to verify and gather data about how well the aircraft and payload can handle stress in various flight regimes.

This makes hypersonic weapons less predictable and complicates ballistic missile defense efforts, with U.S. defense officials previously saying that China’s hypersonic technology has demonstrated a high degree of accuracy along with the ability to perform “extreme maneuvers” and take evasion action in flight.

It is unclear where the video was shot, but Rod Lee of the China Aerospace Studies Institute at the Air University on Maxwell Air Force Base, Alabama, has geolocated the video to possibly the Neixiang Ma’ao air base in Henan Province. The resident H-6 unit at the base is the 106th Air Brigade, which the Pentagon has identified as a nuclear-capable unit.

Neixiang Ma’ao has a single, 12,000-foot runway and 20 aircraft shelters each measuring at least 45 meters (about 148 feet) wide — more than enough to accommodate the H-6N’s wingspan. The base is also undergoing substantial upgrades to its infrastructure, with open-source satellite imagery dating from May 2020 showing ongoing construction of a new, underground facility carved into a nearby hillside that has at least three new entrances and exits; one can be clearly seen measuring approximately 70 meters (230 feet) across.

A satellite image dated May 2020 shows a lineup of aircraft shelters at China’s Neixiang Ma’ao air base. Each shelter is about 45 meters (148 feet) wide. The shelters were completed sometime between mid-2018 and April 2019. (Google Earth)

The H-6N is the latest variant of China’s H-6 family, which can trace its lineage back to the Soviet Tupolev Tu-16 bomber. However, China’s current fleet of H-6K bomber/cruise missile carriers have been thoroughly modernized and are fitted with newer, more powerful Russian engines and indigenous avionics. The H-6N adds an in-flight refueling capability in addition to the fuselage missile station, in lieu of a bomb bay.