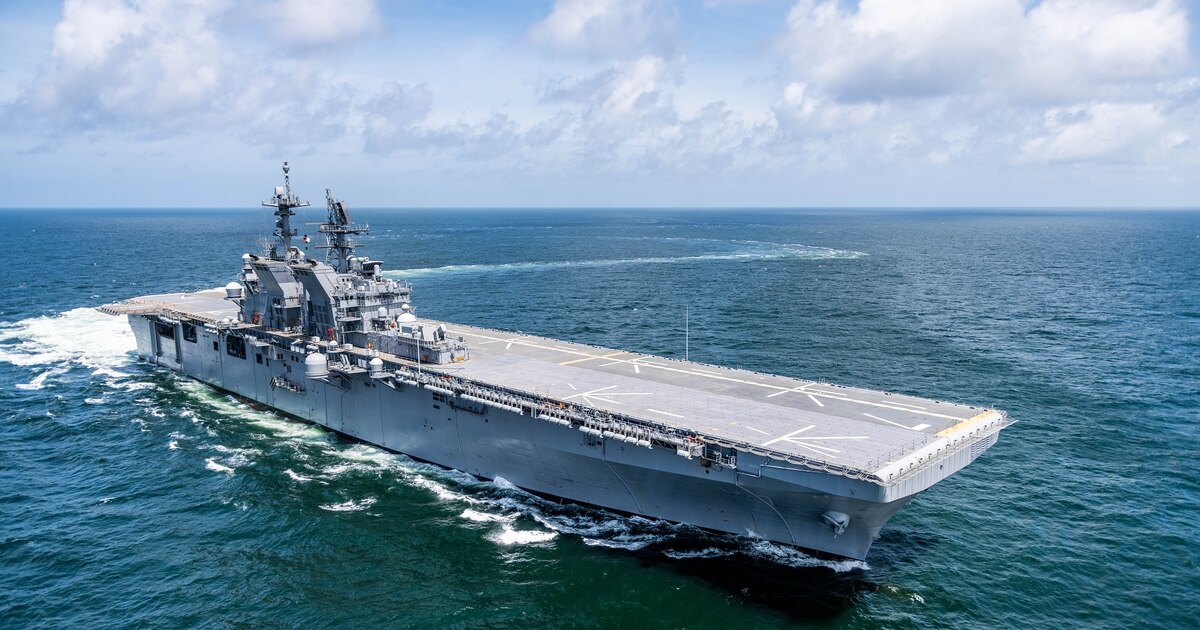 WASHINGTON – Across all three U.S. Navy ship classes being built at Ingalls Shipbuilding in Pascagoula, Mississippi, Navy inspectors in 2018 and 2019 found serious technical issues, according to an unclassified report sent to Congress earlier this year.

The Navy’s Board of Inspection and Survey, known as INSURV, which conducts acceptance trials for new ships found that DDG-117, the Paul Ignatius, had the lowest overall score of any of the five previous destroyers built at Ingalls since the program restarted. And issues with the America-class amphibious assault ship Tripoli in 2018 set the service’s acceptance of the new ship back a whole year.

Both Ingalls’ parent company Huntington Ingalls Industries and the Navy say all issues discovered on ships during acceptance trials are handled prior to delivery, and that Ingalls’ ships have performed well recently. But the issues in 2018 and 2019 raise concerns about a shipyard the Navy depends heavily on as it tries to expand its fleet.

On the destroyer Ignatius, inspectors found four of what’s known as “starred deficiencies,” which the Navy’s INSURV instruction defines as a deficiency that significantly degrades the ships ability to perform a primary or secondary mission, or impacts the safety of the ship. Starred deficiencies must be corrected before delivery.

By way of comparison, the Bath Iron Works-built destroyer Thomas Hudner in 2019 scored the highest of any destroyer in the history of the program, the INSURV report said. Bath, which has had issues of its own, did not delivery a deficiency-free ship either, however. Inspectors found issues with the helicopter landing and undersea warfare systems.

On Tripoli, the INSURV report says that failures in the propulsion and anchoring systems, as well as production delays, pushed the acceptance trial back a whole year. On LPD-27, the Portland, the ship scored lower than any of the previous four ships over the past five years, with deficiencies in main engines, aviation, small boat handling, anchoring, generators and air search radar systems, the report found.

In a statement, Huntington Ingalls Industries spokesperson Becci Brenton pointed to increasing standards for ship acceptance on the part of INSURV, and said Ingalls is committed to fixing any issues that arise prior to delivery.

“Ingalls is committed to delivering quality ships to our Navy customer,” Brenton said in a statement. “An important part of this process involves INSURV providing the shipbuilder with a thorough inspection that sets and continues to raise the evaluation criteria to ensure the material readiness of the fleet.

“If there are system issues uncovered during the testing and grooming of ships, it is our responsibility to use our experience and shipbuilding expertise to create solutions that ensure that each ship performs its missions in a safe and reliable manner. We quickly respond to all deficiencies cited during ship inspections and those are corrected or resolved prior to delivery as Ingalls is dedicated to providing fully capable and operational ships to the Navy.”

Brenton also pointed to the recent delivery of the destroyer Delbert D. Black as an indication the Company is making good progress.

“DDG 119 (Ingalls’ most recent delivered destroyer) received the best overall INSURV grade since the restart of the DDG program,” she said.

The Navy’s statement echoed much of what HII expressed, saying that Ingalls worked hard to fix deficiencies in a timely manner. The Navy also said the issue on Tripoli was largely driven by a new electric anchoring system that took time to get right.

“The Navy engaged with Ingalls management team regarding these areas of concern over the past year, and corrective actions were put in place,” said Navy spokesperson Lt. Courtney Callaghan.

HII’s pointing to rising standards for accepting ships tracks with recent criticism the Navy has taken from both the Government Accountability Office and Congress over accepting ships that are either incomplete or that have significant deficiencies.

In a July 2017 report, the GAO said the Navy didn’t have consistent standards applied across its shipbuilding enterprise.

“The Navy’s ship delivery policy does not facilitate a process that provides complete and quality ships to the fleet and practices do not comport with policy,” the report said. “The policy emphasizes that ships should be defect-free and mission-capable, but lacks clarity regarding what defects should be corrected and by when.

“Without a clear policy, Navy program offices define their own standards of quality and completeness, which are not always consistent.”

The destroyer Zumwalt arrives at Joint Base Pearl Harbor-Hickam in 2019, Delays with Zumwalt’s combat system installation caused Congress to put pressure on the Navy to raise its standards for ship deliveries. (Craig T. Kojima/Honolulu Star-Advertiser via AP)

For example, the GAO found that 25 of the 58 systems required to be certified for deployment on LPD-25 were incomplete at the time of the ship’s delivery, and 14 were still incomplete when the ship was transferred to the fleet. Multiple systems were found deficient while the ship was in the fleet, including an advanced electronics system that “controls nearly all systems and equipment on the ship,” the GAO found.

“The system has experienced widespread performance failures and the Navy has been unable to repair the ship efficiently, including during the post-delivery period and after the ship was provided to the fleet,” the report found. “As a result, the Navy is in the process of looking at incorporating a new system.”

Congressional authorizers, who tasked GAO with the report in the 2017 National Defense Authorization Act have been vocal about what they saw as the Navy loose standards around vessel delivery. Specifically, the committees were unhappy that the Navy took delivery of DDG-1000 from Bath Iron Works without a working combat system.

A change to the law forced the Navy to roll back its delivery date for Zumwalt to after it had its combat system installed at BAE Systems in San Diego.

If Israel’s leadership was responsible it would look after everyone