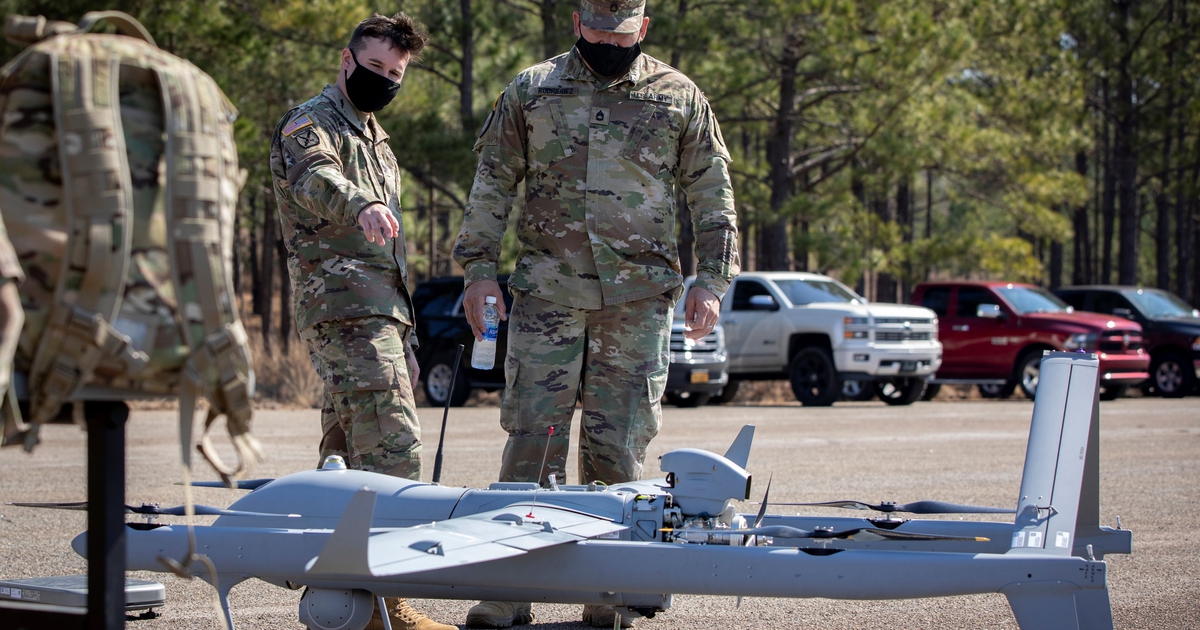 WASHINGTON — The U.S. Army is putting the finishing touches on its requirements for a replacement for its Shadow unmanned aircraft system as it conducts a week-long rodeo with four tactical UAS that offer far greater capability than the decades old, runway-dependent, noisy and logistically burdensome system used today.

The Future Tactical Unmanned Aircraft Systems (FTUAS) rodeo, which began March 1 at Fort Benning, Georgia and is expected to end March 5, is part of a long-running evaluation of future capabilities.

The Army selected four UAS in 2019 to help it evaluate requirements for a replacement for its Textron-manufactured Shadow UAS. Soldiers provided feedback on each system to help the Army chart its requirements but also the tactics, techniques and procedures it would need with a future system.

But shortly after, the Army added two more aircraft for evaluation: the Arcturus-UAV Jump 20 system and L3Harris’ FVR-90.

Brig. Gen. Wally Rugen, who oversees the Army’s Future Vertical Lift modernization, told Defense News ahead of the rodeo that the service will take the information from the lengthy soldier assessments and the rodeo to the Army Requirements Oversight Council for a decision as early as the next quarter, which could mean in the coming weeks.

A positive decision would mean the Army could move into a full-and-open competition to buy future tactical UAS.

Rugen said at the time that he was hopeful the Army would get a revolutionary, not evolutionary, new tactical UAS capability that isn’t tied to a runway, that has a lower acoustic signature and that has far lower equipment requirements in order to transport the system organically within the unit.

Operators of the systems at the rodeo told reporters March 2 that compared to Shadow, the systems offer drastically improved capability over the unmanned systems they have operated for years within Brigade Combat Teams.

They noted it takes roughly one third of the time to set up and fly the new systems across the board compared to Shadow, which requires a runway, trucks of equipment and a ground control station to function. Because set up is so quick and easy, it enables brigade combat teams to quickly jump from one location to another.

“Every day, we tear down everything, all of us tear down what we set up to fly and then put it back up in the morning,” Specialist Anthony Karl, 1st Airborne Brigade Combat Team, 1st Infantry Division, told the reporters. “We wouldn’t be able to do that on Shadow. There’s just no way.”

Operators were also impressed with the acoustic signature of the systems during forward flight and while the vertical takeoff-and-landing mode tended to produce a louder signature, the noise was still significantly reduced compared to the noise coming from a Shadow in the air, which has been equated to a flying lawn mower.

Army aviation leadership also noted improvements in the transportability of the systems and how quickly they could be deployed.

“All of them achieved vertical takeoff and a transition to forward flight and immediately put their payloads into operation that we got to observe and demonstrate. All of them, likewise, successfully brought them back and vertically recovered those systems without any degradation,” Maj. Gen. David Francis, the commanding general of the Army’s Aviation Center of Excellence at Fort Rucker, Alabama, said during the same media event.

Because it was rainy and roughly 50 degrees, the Shadow would have been grounded in those conditions.

Each system was also able to demonstrate automated takeoffs and landings, which is critical to offloading the operator’s cognitive burden so they are free to carry out other crucial aspects of a mission, Rugen told reporters. And operations only required a two to three person crew with significantly less equipment.

Each system was also able to be used on the move, which exceeded leaders’ expectations. “We didn’t think we would be able to operate on the move, but all five BCTs, all four form factors, operated on the move, by which the aircraft was in flight and they were driving an FMTV or a Humvee,” Rugen said. “A lot of innovation by giving this to soldiers and having soldiers work it.”

Soldiers were actually told during at least two Combat Training Center rotations that they were “too far forward and too agile” and were asked to “kind of fall back to keep the exercise in the parameters,” Rugen said.

Additionally, some of the systems were able to show that not only could they be transported by a CH-47 Chinook cargo helicopter, which is a baseline requirement for a future system, but in the smaller airframe of the UH-60 Black Hawk utility helicopter.

Martin UAV demonstrated the V-BAT’s capability to be transported via a UH-60 Black Hawk at the Future Tactical Unmanned Aircraft Systems rodeo held to assist the Army in firming up its requirements for a Shadow UAS replacement competition. (Photo courtesy of Martin UAV)

Textron said during a briefing with reporters last week that its Aerosonde HQ can be transported in a UH-60. And Martin UAV demonstrated the Black Hawk transportability of V-Bat at the rodeo.

Rugen said it was likely the Army would stick to the requirement to transport FTUAS in a Chinook, but that vendors showed flexibility with transporting the systems. “We’ll see because they’re working the requirement document, finalizing all of it right now. We’ll see if the bar gets raised, but to me, I think it’s fine where it’s at right now.”

In terms of powering the systems, the Army has an objective requirement that the UAS run on JP-8 fuel. Currently, not all of the systems use the fuel type. Aerosonde HQ is powered by the heavy fuel and V-Bat has a near-term path for a heavy fuel capability.

“Obviously there’s room in there for nuance,” Rugen said. “Looking at the entire offering, could we come off that? You know, it’s possible, but we certainly prefer the JP-8 solution and that’s why currently it’s an objective requirement in our draft at this time.”

The Army also saw a leap in payload improvement in terms of both the quality of the sensors on board but also the capacity to carry payloads.

For example, the original V-Bat featured the ability to carry an 8 lb. payload, but since then, at the Army Expeditionary Warfighting Experiment, the V-Bat 128 has been able to demonstrate a 25 lb. payload capacity not including fuel, according to a company statement released at the end of February.

“We saw the soldiers uniformly fall in love with this capability and want to keep it in,” Rugen said, “because, again it was such a transformational capability.”