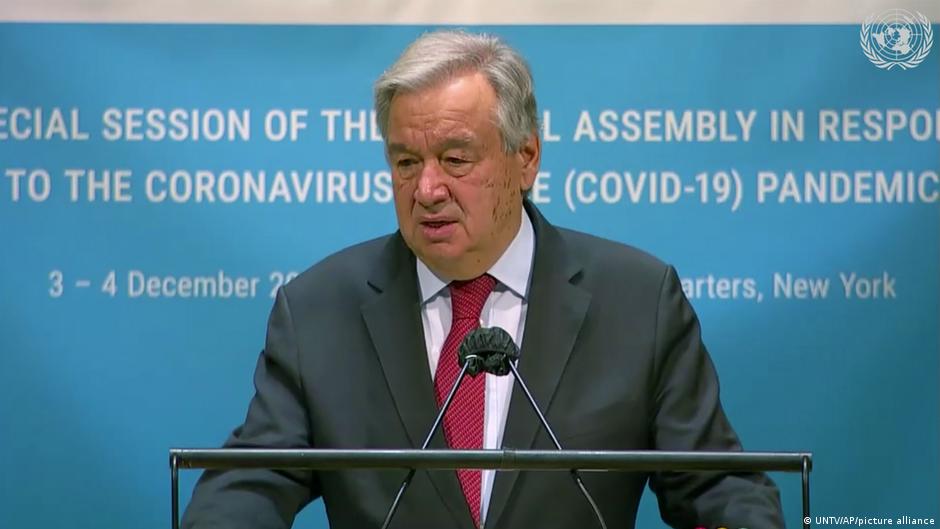 In a speech on Thursday at the start of a special UN General Assembly meeting on the pandemic, Guterres said the WHO guidance “should have been the basis for a coordinated global response.”

“Unfortunately, many of these recommendations were not followed. And in some situations, there was a rejection of facts and an ignoring of the guidance,” he said. “And when countries go in their own direction, the virus goes in every direction.”

Although Guterres didn’t single out any countries or world leaders, his remarks come amid ongoing tensions with outgoing US President Donald Trump. In the midst of the first wave of the pandemic earlier this year, Trump cut funding to the WHO and announced that the US would be pulling out of the global health body.

Under Trump, the US government has refused to take part in UN programs to promote global vaccine-sharing efforts. The private US pharmaceutical companies behind two promising coronavirus vaccine candidates, however, have already signed deals with other countries to provide doses of the vaccines — although it remains to be seen how long it will take for doses to be distributed to developing countries.

Guterres’ remarks were echoed by European Union Council President Charles Michel, who called for an international treaty on pandemics.

“The number of epidemics has increased in recent decades. We knew that the world could potentially be struck by a major pandemic. And yet we were caught unprepared,” he said. “There was therefore a failure of sorts and we need to draw the lessons and the consequences.”

One of the positive takeaways from the pandemic was an “unprecedented” cross-border cooperation on vaccine research that led to the creation of several coronavirus vaccine candidates in record time.

Michel said he hoped that a future international treaty could help secure better financing and research coordination, as well as guarantee access to vaccines and treatments for future pandemics.

The UN summit comes on the heels of the UK authorizing the BioNTech-Pfizer vaccine, while US and EU regulators are working to do the same.

Kalipso Chalkidou, the director of global health policy at the Center for Global Development, told DW that the authorization process will be a major step toward getting the vaccine out to other parts of the globe.

“[The emergency authorization process is] important and understandable in terms of equitable access. I think it’s reasonable to assume that wealthier nations, those with those advance deals with companies, will be the first to get the vaccine and distribute it to their populations, followed by resource constrained countries,” she said.

The coronavirus pandemic first emerged in Wuhan, China late last year and quickly spread globally. So far, nearly 65 million people around the world have been infected, while 1.5 million have died.