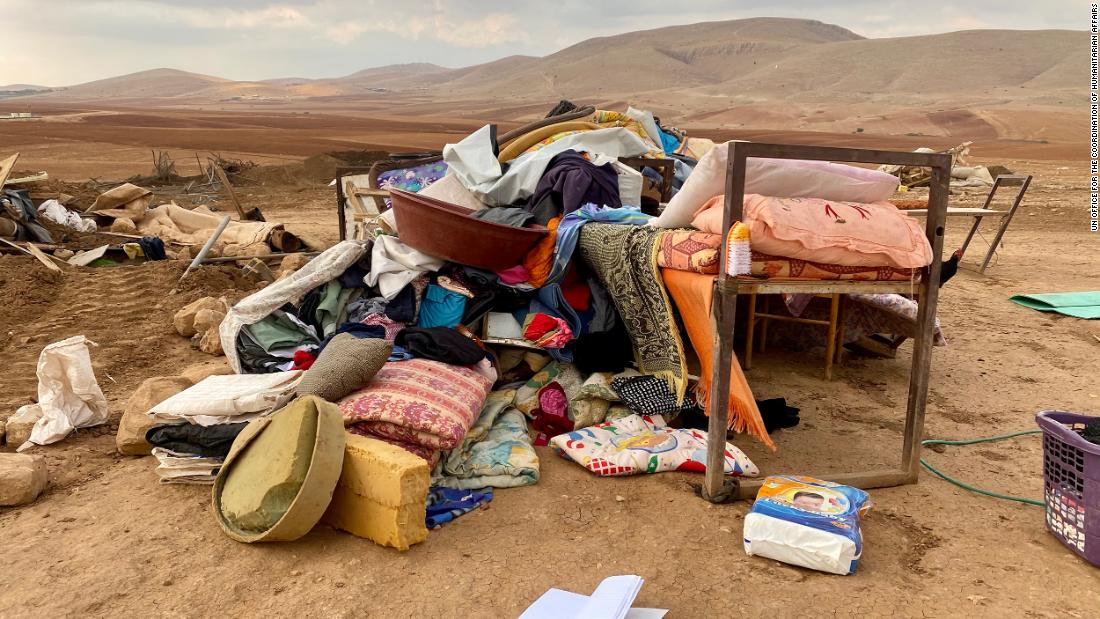 The UN described the demolition in the community of Khirbet Humsa as “the largest forced displacement incident in over four years.”

Israel’s Coordinator of Government Activities in the Territories (COGAT), which administers the occupied West Bank, said seven tents and eight pens were destroyed because they were built illegally in a firing zone in the Jordan Valley.

“We will note that the enforcement was carried out in accordance with the authorities and procedures, and subject to operational considerations,” COGAT said in a statement.

Harbi Abu Al-Kabsh, a 47-year-old Palestinian, said villagers were given no warning of the impending demolition. “They never told us that they are coming to demolish until we saw them coming with bulldozers,” he told CNN. “They didn’t even give us a chance to take our properties.”

Al-Kabsh promised to rebuild his home on the same spot, despite years of legal battles over the fate of his community, and the immediate challenge of the onset of winter rains.

“My cousin’s wife gave birth two days ago and she is with her newborn outside under the rain. I’m now buying some rain covers to try to protect the children,” he said.

An observer from the UN Office for the Coordination of Humanitarian Affairs (OCHA) who spoke with CNN said the Israeli military also razed two solar panels and seized a tractor and a private vehicle.

Yvonne Helle, a senior UN Development Programme official in the Palestinian territories, criticized COGAT’s reasoning for demolishing the structures, some of which had been donated as humanitarian aid. “The lack of Israeli-issued building permits is typically cited as a reason, even though, due to the restrictive and discriminatory planning regime, Palestinians can almost never obtain such permits. Demolitions are a key means of creating an environment designed to coerce Palestinians to leave their homes.”

According to the UN, Israel has carried out widespread demolitions in the West Bank and East Jerusalem in 2020, leaving 869 Palestinians homeless, representing the largest number of demolitions since 2016.

“I remind all parties that the extensive destruction of property and the forcible transfer of protected people in an occupied territory are grave breaches of the Fourth Geneva Convention. While assuring that the humanitarian community stands ready to support all those who have been displaced or otherwise affected, I strongly reiterate our call to Israel to immediately halt unlawful demolitions,” Helle said.

The European Union also slammed the demolition. “Such developments constitute an impediment towards the two-state solution,” a spokesperson said in a statement. “The EU reiterates its call on Israel to halt all such demolitions, including of EU-funded structures, in particular in light of the humanitarian impact of the current coronavirus pandemic.”

Black Friday: 6 rules you need to follow when buying phone and gadget gifts

Win or Lose, Trump Will Remain a Powerful and Disruptive Force