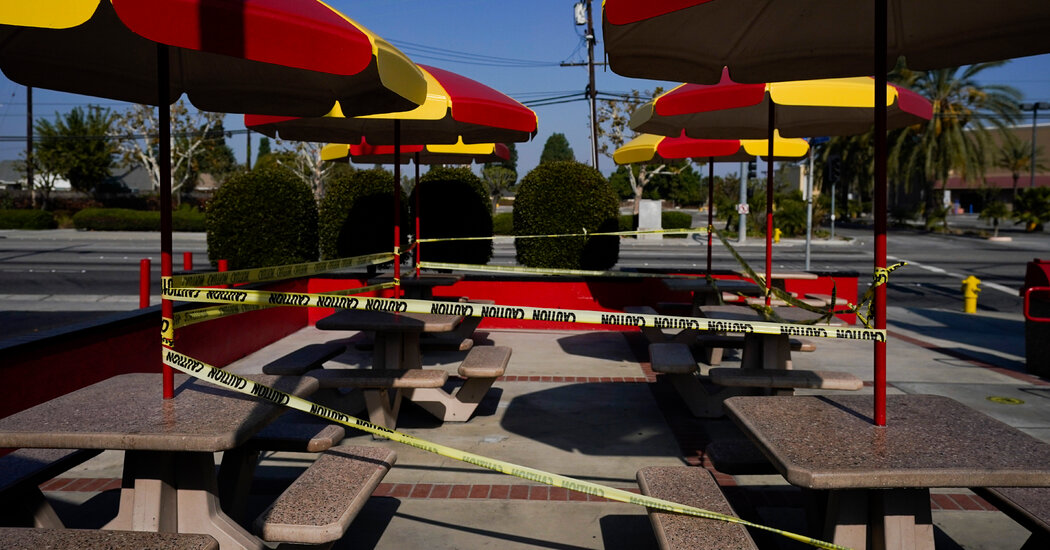 Nearly 714,000 people filed initial claims for state unemployment insurance, compared with 836,000 in the prior week, before statistical adjustments. With seasonal swings factored in, the figure was 712,000, a drop of 75,000, the Labor Department reported Thursday.

The decline came after two consecutive weekly increases, though the level of claims remained at levels unseen in previous recessions.

The numbers are likely to have been artificially depressed by the Thanksgiving holiday, said Diane Swonk, chief economist at the accounting firm Grant Thornton in Chicago. “People don’t apply as much when there are holidays,” she said. “There is a natural falloff that occurs, but we just don’t know how big it was.”

She compared the effect to the drop in hospitalization data for the coronavirus that has been noted on Sundays and holidays. Although the decline in the claims number was seemingly good news, the Thanksgiving-related drop could cause a measure of catch-up when next week’s numbers are released.

“It’s still bad,” she said, noting that 25 states reported more than 1,000 layoffs each last week. “They are broad-based and concentrated in the same sectors we saw when people pulled back in March — food services, health care, retail and hotels.”

Almost 289,000 new claims were tallied under the Pandemic Unemployment Assistance program, which provides support to freelancers, gig-workers, the self-employed and others not ordinarily eligible for unemployment insurance.

Pandemic Unemployment Assistance is one of two emergency federal jobless benefit programs set to expire at the end of the month. Millions will be scrambling to make up for the lost funds, even as the absence of those dollars in consumers’ pockets dampens overall economic growth.

Republicans and Democrats on Capitol Hill continue to spar over the size of any new stimulus package, with G.O.P. leaders opposed to the kind of multitrillion-dollar relief effort envisioned by Democrats.

The prospect of vaccines to combat the virus is a hopeful long-term signal, but the economy will face serious challenges until inoculations can begin on a mass scale in the spring, said Michael Gapen, chief U.S. economist at Barclays.

He is looking for a U.S. economic growth rate near zero in the first quarter, followed by a rebound later next year as consumer spending picks up.

“I think the economy is on a solid footing, but we may just hit a couple of bumps between now and the end of the first quarter,” Mr. Gapen said. “Stimulus would be helpful, of course.”

Independent economists overwhelmingly favor the passage of more stimulus money before the end of the year — and the prospects for such a bill seem to be improving.

Democratic leaders in Congress yesterday signaled their openness to a bipartisan $908 billion stimulus package. Democrats would prefer a bigger package, like the $3 trillion bill that the House passed in May. But House Speaker Nancy Pelosi and Chuck Schumer, the Senate Minority Leader, released a statement saying that the bipartisan plan should become “the basis for immediate bipartisan, bicameral negotiations.”

The next move is up to Mitch McConnell and other Senate Republicans, some of whom have previously supported a $500 billion bill. There are political reasons that both sides want to appear responsive to Americans’ economic pain: The Senate runoff elections in Georgia on Jan. 5 will determine which party controls the Senate.

The economy already seems to have slowed in recent weeks, as virus caseloads have risen. And the situation will probably worsen if Congress does not pass another stimulus. Many provisions enacted since the spring are set to end on Dec. 31. Among the effects:

Last year, Nestlé pledged to reduce its net greenhouse gas emissions to zero by 2050. Today, it released a detailed 27-page plan on how it will get there.

Nearly two-thirds of the Swiss food giant’s emissions come from agriculture, where reducing emissions requires working with some 500,000 farmers and 150,000 suppliers. That’s more complicated than simply switching to renewable electricity or offsetting business travel (which Nestlé is also doing).

Mark Schneider, the company’s chief executive, spoke with the DealBook newsletter about how he won support from more than 290,000 employees — and how he will sell investors on paying now to meet a goal 30 years in the future.

Long-term investors see the net-zero pledge as “future-proofing the company,” Mr. Schneider said, especially as environmental laws become stricter and consumers increasingly seek climate-friendly products. For investors with shorter horizons, the pledge is “earnings neutral,” he added: Despite costing around $3.6 billion over the next five years, these investments will be financed by operational efficiencies and will, eventually, enable the company to “charge a premium for better products.”

“There is also a revenue upside,” Mr. Schneider said. “The margin is not going backwards.”

After announcing the targets with “great fanfare,” it will become “a matter of honor” to meet them, he said. Still, the executives making these commitments will probably have retired by 2050. To give the plan teeth, starting next year the company will tie part of its executive committee’s annual bonuses to quantifiable environmental factors. “We’re putting our money where our mouth is,” he said.

Nestlé made the net-zero commitment about six months before the pandemic, which has had two major effects on the pledge, Mr. Schneider said.

On the positive side, the urgency of addressing climate change has intensified. “People see what can happen if you wait too long, and that you better fight a problem early on and get a handle on it,” he said. And being confined at home has given people time “to think through what really matters,” he added.

On the negative side, the financial stimulus to rescue the global economy — which was necessary, Mr. Schneider emphasized — has left the world with huge, unexpected debts. That means less “leeway from the public point of view” to spend on measures like long-term greenhouse gas reductions.

Detailed loan information released by the Small Business Administration showed that about 600 businesses received loans of $10 million, the largest available under the $523 billion Paycheck Protection Program. And a mere 1 percent of borrowers received more than a quarter of the total amount of money disbursed, The New York Times’s Stacy Cowley and Ella Koeze report.

The data is the first full accounting of how federal money was spent through the P.P.P., which offered struggling small companies forgivable loans to help them retain workers and keep up with bills.

The data also shows how inconsistently the S.B.A. disbursed money through the Economic Injury Disaster Loan, a still-running aid effort that offers companies and nonprofits low-interest loans directly from the government to help them rebuild their battered operations.

After President Trump’s loss to former Vice President Joseph R. Biden Jr., more than 40 percent of Republicans who were polled for The New York Times said they expected their family to be worse off financially in a year’s time, up from 4 percent in October. Democrats expressed a rise in optimism — though not as sharp as the change in Republican sentiment.

The new polling, by the online research firm SurveyMonkey, reaffirms the degree to which Americans’ confidence in the economy’s path has become entwined with partisanship and ideology. In the days after the election, for the first time since Mr. Trump took office in 2017, Democrats and independent voters expressed higher levels of confidence in the economy than Republicans did, The New York Times’s Jim Tankersley and Ben Casselman report.

Here are some of the survey’s findings:

Big partisan shifts in confidence have become common following elections in recent decades. Republicans’ economic sentiment fell when Barack Obama was elected president in 2008, then soared when Mr. Trump was elected in 2016. Republicans’ self-reported confidence remained well above Democrats’ for the entire Trump administration, until the election caused the pattern to reverse again.

About the survey: The data in the article came from an online survey of 3,477 adults conducted by the polling firm SurveyMonkey from Nov. 9 to Nov. 15. The company selected respondents at random from the nearly three million people who take surveys on its platform each day. Responses were weighted to match the demographic profile of the population of the United States. The survey has a modeled error estimate (similar to a margin of error in a standard telephone poll) of plus or minus 2.5 percentage points, so differences of less than that amount are statistically insignificant.

Many homeowners at risk of foreclosure can breathe a little easier — for another month, at least.

The Federal Housing Finance Agency, the regulator that oversees federally-backed mortgages, said on Wednesday that single-family homeowners with loans backed by Fannie Mae or Freddie Mac will be protected from foreclosure through at least Jan. 31, 2021. The moratorium had been scheduled to expire at the end of this month.

People living in properties that either Fannie or Freddie has taken over because the owner couldn’t pay the mortgage also received relief: The regulator extended its moratorium on evictions as well.

“This extension gives peace of mind to the more than 28 million homeowners with an enterprise-backed mortgage,” said Mark Calabria, director of the Federal Housing Finance Agency, referring to the two so-called government-sponsored enterprises.

Fannie and Freddie, which buy many loans from lenders and package them into investments, are not the only government affiliated organizations that have enacted moratoriums for loans associated with their work. The Federal Housing Administration, which often insures loans to borrowers who put less money down, has a foreclosure and eviction moratorium through Dec. 31. A spokeswoman for the agency said it is assessing its next steps.

The regulator overseeing Fannie and Freddie said providing the pandemic-related relief to both borrowers and renters was already expected to cost $6 billion because of loan defaults, foreclosures and related losses. The one-month extension will add to that.

Homeowners can find out who owns their mortgage by entering their address on various government websites.

Fakespot, a startup that helps shoppers detect robot-generated reviews and phony sellers on Amazon and Shopify, used this pitch deck to nab a $4 million Series A