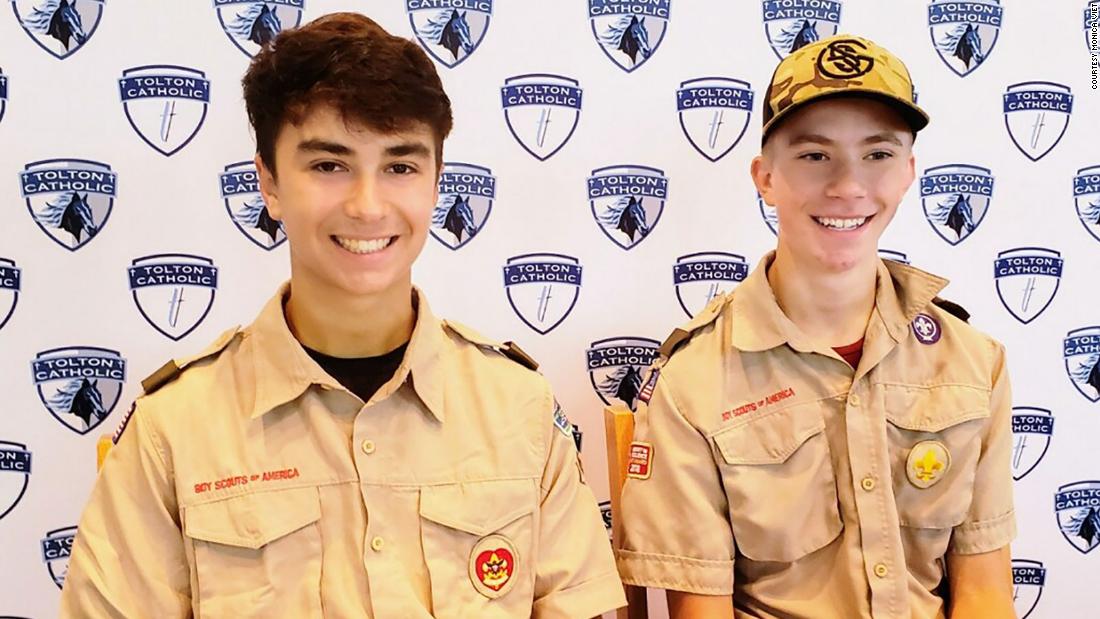 Joseph Diener, 16, and Dominic Viet, 15, were riding their bikes in Columbia, following a heavy storm on June 25, when they heard a woman screaming for help.

The boys had noticed the young woman earlier as she swam with a friend at Jay Dix Station, where deep floodwaters had engulfed an entire basketball court and nearly submerged its hoops.

Now she was quickly drowning.

“The first thing that came into my mind was to get into the water,” Dominic told CNN. “We didn’t have time to think, her head was barely above the water and we could see her sinking more down every second. We didn’t think about the risks, we had to get her out.”

Fortunately, the scouts had earned their swimming and lifesaving merit badges and were even taught what maneuvers to use when rescuing someone from the water.

Without hesitation, they dove in and swam to her rescue.

“We went in and there was a light current, and we had her grab onto our shoulders and we swam back to shore,” Joseph told CNN. “She laid there for about five minutes, coughing up a lot of water and just not moving or talking.”

‘What they did was very brave’

A unit with the Columbia Fire Department and an ambulance responded to a call of a female in the water in distress, but by the time they arrived at the scene the two boys had already rescued her, Assistant Fire Chief Jerry Jenkins told CNN.

The woman was transported to a local hospital for evaluation. Her identity and current status are not known, he added.

Early that morning, Columbia saw a heavy storm quickly drop at least 6 inches of rain, causing the city’s creeks to overflow. Many areas, including the park where the boys went biking, were flooded.

“It was very dangerous, with flood conditions and moving waters it’s a risky rescue even for first responders,” Jenkins said. “There have been folks who have lost their lives, being civilians and making rescues. What they did was very brave, and they are very heroic, but there is definitely a side of caution.”

The assistant fire chief warned that floodwater poses many dangers — including currents, debris and even electrocution.

“You don’t know what it’s in the water, it could have sewage in it, or chemicals, it’s very dangerous to even enter floodwater let alone to go swimming,” Jenkins said. “They are very brave men to do what they did and thankfully it ended well.”

Unaware of the boys’ daring rescue, Dominic’s mom had been trying to contact her son and became increasingly worried when he didn’t respond.

“They were out for a while, and there was a time when he was going to come home as another storm was coming in and I was texting and calling and he wasn’t answering me,” Monica Viet told CNN.

She sent her husband to Dominic’s location to check on him, but when he arrived, he found ambulances and fire trucks instead of their son.

“I thought of the worst, he’s on a bike and people weren’t paying attention and my fear was he was going to pull up and see our son on the ground,” Viet said. “But then he saw them on their bikes heading back to their friend’s house, and I got a text from Dominic saying ‘Coming home soon, just saved a woman’s life Mom.'”

The boys’ parents were shocked to learn what happened, but relieved their children were safe.

After lots of hugs, they reminded the boys about the dangers of floodwaters, said Jeremy Diener, Joseph’s dad.

“His mom and I are very, very proud of him that he would think to put someone’s life above his own, it’s humbling and it’s awesome,” Diener told CNN. “At the same time, as parents, it’s still terrifying. It’s scary to think that your son intentionally put himself in harm’s way to save someone.”

In recognition of their bravery, the Columbia Fire Department will honor the scouts with a “Citizen Life Safety Award” next week.