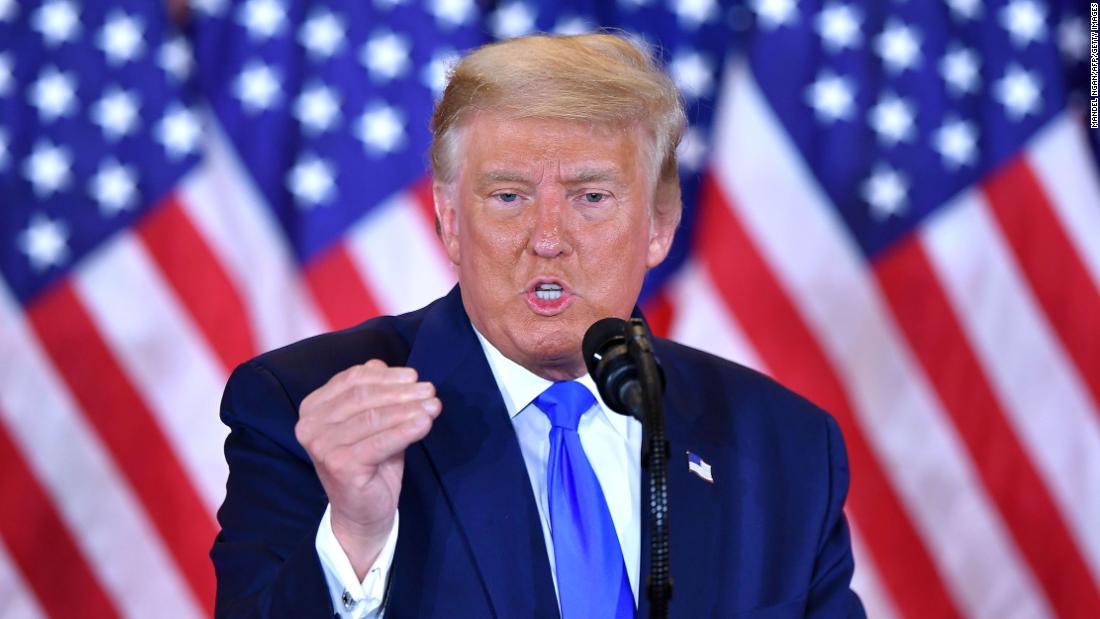 With millions of ballots still being counted, Trump awoke in an agitated state, tweeting or retweeting messages that sought to undermine confidence in the vote counting process. At least three were labeled by Twitter as “disputed” or “misleading.”

Several top Republicans, including those close to Senate Republican leaders, were privately dismissive of Trump’s suggestion that ballots shouldn’t be counted after Election Day.

And even his own campaign said in a call with reporters that Trump’s remaining path to victory will rely on those still-uncounted ballots in places where the process of tabulating results has taken longer.

What emerged was a picture of a President intent on using all the tools at his disposal to force a victory, including wielding misinformation about the integrity of the vote and an onslaught of legal maneuvers, even as the results were still coming in and his advisers insisted the math would turn in his favor.

As the day unfolded, the Trump team’s legal strategy was becoming clearer. The campaign said it would request a recount in Wisconsin, which CNN projects Biden will win, and demanded vote counting be halted in Michigan. A team of advisers mobilized to Philadelphia, which Trump had signaled before Tuesday would be the site of intensive legal efforts should results show him losing.

And Trump supporters began receiving a barrage of fundraising solicitations to finance what will amount to an expensive and drawn-out legal fight.

Build your own road to 270 electoral votes with CNN’s interactive map
Trump’s advisers believe he does still have a path to victory that includes wins in Pennsylvania and Arizona, though acknowledge privately it will be an uphill battle.

Trump, however, has projected less optimism in those routes and has instead sought to question the large batches of outstanding votes that have tipped some states toward Biden.

“They are finding Biden votes all over the place — in Pennsylvania, Wisconsin, and Michigan. So bad for our Country!” he wrote on Twitter.

Aides are encouraging Trump to stay in the fight, though Trump hardly needs the nudge, a campaign adviser said on Wednesday. Trump has been livid watching Biden’s lead increase in states such as Michigan and Wisconsin.

“He feels it’s being stolen from him,” the adviser said.

Trump’s grip-like command of the Republican Party remains firmly in place, and does not appear poised to loosen after Tuesday night’s results. Few Republican elected officials spoke out against Trump’s attempts to delegitimize the vote counting process. Instead, most were silent or at least circumspect as the situation plays out.

Senate Majority Leader Mitch McConnell, who won his own reelection race on Tuesday, suggested at a news conference in Louisville that Trump’s premature declaration of victory was not binding.

“Claiming you win the election is different from finishing the counting,” he said.

Privately, however, those within Trump’s party were beginning to undercut his claims that fraudulent voting was leading to late Democratic surges in critical battlegrounds.

“No, we don’t agree with what’s coming out of the White House,” a senior GOP official said. “We see no credible reports of fraud or anything improper.”

Trump had long signaled he would not accept the results of a close election that showed him losing, but how he planned to proceed remained uncertain. He said in his wee-hours statement from the East Room that he would challenge the election results in the United State Supreme Court, but so far on Wednesday his legal team was still formulating plans in individual states where the margins remain razor-thin, including in Pennsylvania and Wisconsin.

Trump’s campaign signaled to its allies it plans to launch extensive legal challenges in those states. Stepien told campaign surrogates in a telephone call Wednesday morning that campaign lawyers are already on the ground in anticipation of filings, a person familiar with the matter said.

Trump campaign officials told allies on the call that the first likely step would be requesting recounts in states including Wisconsin and Michigan.

A few hours later, the campaign said in a statement it would request a recount in Wisconsin, though under Wisconsin law a campaign can’t petition for a recount until the state’s Election Commission completes the canvass from county election boards.

How much a recount would aid Trump’s efforts isn’t clear; a recount of the presidential vote in 2016 only netted Trump an additional few hundred votes. Biden was leading Trump by more than 20,000 votes as of Wednesday.

The Trump campaign also released a statement saying it had filed a lawsuit in Michigan asking the state to halt vote counting until it receives “meaningful access” to observe the opening of ballots and the counting process.

CNN teams in Michigan have not seen evidence that the suit has actually been filed. While the Trump campaign has said the lawsuit was filed in the Michigan Court of Claims, the docket clerk for the Court of Claims, Morgan Adams, told CNN that the court has not received the filing.

Trump signaled before the election his lawyers would intervene in Pennsylvania shortly after voting concluded, and officials have told Trump allies they anticipate a filing there in the next few days. It wasn’t yet clear what would constitute the basis for a legal challenge in Pennsylvania.

Trump’s personal attorney Rudy Giuliani tweeted he had mobilized to Philadelphia, but it wasn’t clear if he was acting in an official capacity for the campaign.

Trump had no events on his schedule Wednesday, and Vice President Mike Pence’s schedule was similarly empty. Both were expected to remain in Washington to consult with campaign and legal teams about their next steps.

The previous evening, deliberations over what Trump would say when he emerged after midnight were at times intense, according to people familiar with the matter. Trump’s speech came around 2:30 a.m. ET, well after his rival spoke from Wilmington, Delaware. While teleprompters were set up for him to read from, he appeared to ad-lib much of his speech.

“This is without question the latest news conference I’ve ever had,” Trump said.

Speaking after him, Pence seemed to offer a drastically different message, saying that “while the votes continue to be counted, we’re going to remain vigilant.”

Trump openly acknowledged that he had felt better earlier in the evening on Tuesday, as invited guests nibbled on pigs-in-a-blanket and french fries on the State Floor of the White House and early results showed him edging former Vice President Joe Biden.

“Literally we were just all set to get outside and just celebrate something that was so beautiful, so good,” he said.

While 400 people had been invited to the party, far fewer actually attended, including several Fox News personalities and members of the President’s cabinet.

Trump made a brief appearance at the party early in the evening before retreating upstairs to his private residence. There, he conferred with a smaller group of campaign and White House advisers about how to proceed. A campaign “war room” had been established on the White House campus to provide Trump and his senior team real-time updates.

Other members of Trump’s inner-circle, including members of his family, held a more private results-viewing party from the family dining room, where large televisions had been wheeled in and a sofa set up.

Trump’s early confidence turned to indignation when Fox News, the network airing on large televisions set up throughout the White House, projected Biden would win Arizona. Trump’s campaign publicly called on the network to retract the projection and on Wednesday morning, the President’s campaign manager insisted to reporters that Arizona remained in play.

“Late-arriving votes cast closest to Election Day are the ones being counted now,” Bill Stepien said, adding they expect between two-thirds and 70% of the remaining uncounted ballots would be “coming to the President.”

Biden’s campaign offered an entirely different assessment on its own briefing call, saying they believed the former vice president had won in Arizona and was on track to win Michigan and Wisconsin.

Despite the confidence projected by the Trump campaign, not everyone on that team was feeling optimistic waking up on Wednesday.

“We are clearly in a corner here,” one senior official said.

But the official cautioned that the campaign is not yet out of the game, and campaign officials have continued to claim both publicly and privately that they think they have shot if they can get Arizona and Nevada into their column.

Meanwhile, the Trump campaign was desperately fundraising the day after the election for resources to wage legal battles against election results. The campaign sent out six emails to supporters since midnight asking for money. Each of the solicitations has included the false claim that Democrats are trying to “steal” the election.

There is no evidence of nefarious activity surrounding the election count.

At a rally in Kenosha, Wisconsin, on the eve of the election day, Trump said campaign lawyers “will be going in and they’ll be fighting.”