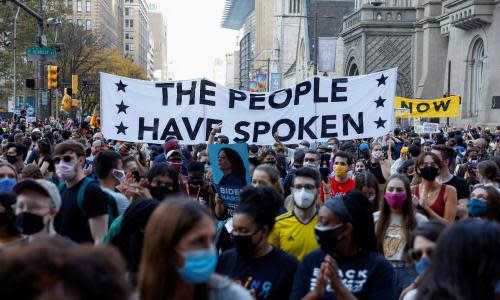 A major law firm withdrew overnight from a Trump campaign case in Pennsylvania seeking to have mail-in ballots thrown out, in the latest blow to the president’s efforts to challenge the 2020 election result in court.

The Ohio-based Porter Wright Morris & Arthur firm, which brought a suit on Monday alleging that the use of mail-in ballots had created “an illegal two-tiered voting system” in the state, abruptly withdrew from that case in a memo to the court.

“Plaintiffs and Porter Wright have reached a mutual agreement that plaintiffs will be best served if Porter Wright withdraws,” the memo said. The lead lawyer in the case, the Pittsburgh-based Ronald L Hicks Jr, did not immediately reply to a request for comment. The news was first reported by the New York Times.

Separately, lawyers for the Trump campaign withdrew a lawsuit in Arizona, conceding that the case would not move enough votes to change the election result in the state. “Since the close of yesterday’s hearing, the tabulation of votes statewide has rendered unnecessary a judicial ruling as to the presidential electors,” Trump lawyer Kory Langhofer told an Arizona state court, in news first reported by the Wall Street Journal.

Unlike most lawsuits brought by the Trump campaign, which targeted small pools of votes whose exclusion would not change the election result, the Porter Wright suit in Pennsylvania challenged nearly 2.65m votes that were cast by mail, the majority by Democrats.

It accused the secretary of the commonwealth, Kathy Boockvar, of “arbitrary and illegal actions” and sought an emergency order prohibiting the certification of the Pennsylvania election result.

With that lawsuit stalled, certification in Pennsylvania – and the formal election of Joe Biden as president – drew a step closer. By law the state’s result must be certified by 23 November.

The news came as a coalition of US federal and state officials said they had no evidence that votes were compromised or altered in last week’s presidential election, rejecting unsubstantiated claims of widespread fraud advanced by Trump and many of his supporters.

The statement from cybersecurity experts trumpeted the 3 November election as the most secure in American history.

The Trump campaign has been using lawsuits trying to prevent or delay states in which Trump lost from certifying their election results, an essential step to translating state popular-vote results into a national electoral college result.

Biden has opened up a lead of 5.3m popular votes and counting, and he is on track to win the electoral college 306-232.

Dozens of lawsuits brought by the Trump campaign in six states to challenge the election result have gained little traction. The campaign has won minor court victories, such as requiring Pennsylvania to set aside ballots received after election day in case they are later ruled invalid.

But that pool of ballots and others targeted in Trump lawsuits is not large enough to overcome Biden’s lead in Pennsylvania, where he is up almost 60,000 votes and counting, and in other states.

Porter Wright is representing the Trump campaign and the Republican party in other Pennsylvania lawsuits, including one seeking to throw out mail-in ballots for which missing voter identification information was not provided by 9 November. The disposition of that lawsuit, which Hicks was also leading, is unclear.

Porter Wright and a second large law firm, the Ohio-based Jones Day, representing Republicans in 2020 election lawsuits have come under pressure for acting as perceived accomplices in Trump’s effort to cancel the election result.

The legal news site law.com called it a “public relations nightmare” for the firms. At least one lawyer at Porter Wright resigned over the firm’s decision to carry Trump’s lawsuits forward, the NYT reported.

The Lincoln Project anti-Trump Republican group has attacked the firms on Twitter, asking, “do you believe your law firms should be attempting to overturn the will of the American people?” The group was suspended from Twitter for publishing the names and office contact information of the lawyers.

While legal actions by the Trump campaign are proceeding in multiple states, more than a dozen cases have been thrown out of court, and there is not a single case in which substantial evidence of election fraud has emerged.

Instead, Trump lawyers have had to admit to judges that they have no evidence of fraud – in sharp contrast with the message the president is spreading on Twitter.

In a case in Maricopa county, Arizona, accusing poll workers of misconduct – the case that was withdrawn on Friday afternoon – Trump lawyer Langhofer told a judge that the plaintiffs were “not alleging fraud” or “that anyone is stealing the election” but raising concerns about “good faith errors”.

In a case in Montgomery county, Pennsylvania, the lawyer Jonathan Goldstein, who has his own law firm, was attempting to have 592 mail-in ballots thrown out because of “irregularities” with the ballots’ outer envelopes.

A judge pressed Goldstein on whether he was alleging voter fraud.

“I am asking you a specific question, and I am looking for a specific answer,” the judge said. “Are you claiming that there is any fraud in connection with these 592 disputed ballots?”

“To my knowledge at present, no,” Goldstein said.

“Are you claiming that there is any undue or improper influence upon the elector with respect to these 592 ballots?” asked the judge.

Goldstein replied: “To my knowledge at present, no.”