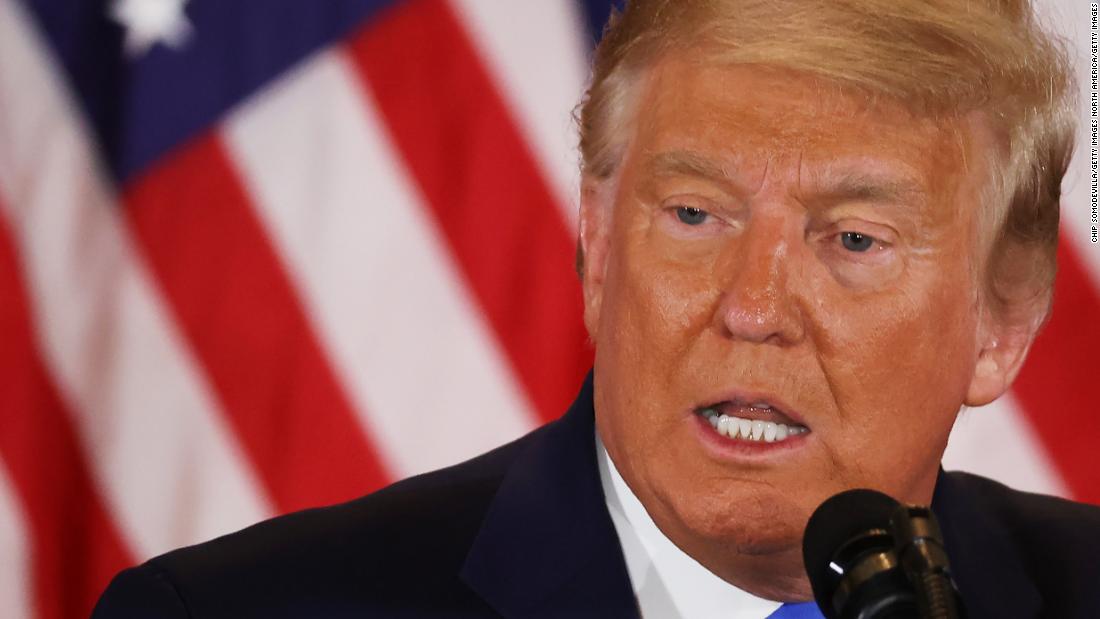 21
Share
So far he has been bolstered in his stance by those closest to him, including his senior advisers and his adult sons, who have mounted an aggressive effort in the courts to challenge the results and have pressured other Republicans into defending him.
Top aides, including his chief of staff Mark Meadows, have not attempted to come to terms with the President about the reality of what is happening. Instead, they have fed his baseless claim that the election is being stolen from underneath him.

Trump has acknowledged to some allies he recognizes the electoral math will not work in his favor, according to people familiar with the conversations, but has maintained that a prolonged court battle and corrosive rhetoric about election fraud would sow enough doubt to allow him to refuse to accept the results.

Two campaign advisers and one source close to the President said Trump will exhaust his legal avenues for fighting the results in several key battleground states before giving any consideration to conceding.

“He’s in fighting mode,” one source close to the President said. “He thinks it’s in his benefit to fight.”

While the reality of Trump’s impending loss has set in for many people close to the campaign, others are advising the President to continue fighting the outcomes and investigate claims of fraud.

Biden’s campaign voiced little concern at the prospect of Trump clinging to power.

“As we said on July 19, the American people will decide this election. And the United States government is perfectly capable of escorting trespassers out of the White House,” campaign spokesman Andrew Bates said in a statement.

The Trump campaign released a statement Friday morning making clear it will refuse to concede the election, calling any projections of Biden as the winner “false” and the race “far from final.”

“This election is not over,” Trump campaign general counsel Matt Morgan said in a statement.

Still, some of the President’s allies have grown concerned that someone will eventually have to reckon with him that his time in office is likely coming to an end. It is a possibility the President did not consider in a serious way during the election, despite polls showing him with only a narrow path to victory, believing that looking past Election Day was bad luck.

The delicate matter of a loss — and a potential post-presidential life — was not discussed widely among his team and was not raised often with the President, who believed adamantly he would win.

Trump spent much of the campaign claiming Biden was the worst presidential candidate in history — and suggesting that losing to him would amount to abject humiliation.

“Losing is never easy,” he said at his campaign headquarters on Election Day. “Not for me, it’s not.”

Now, people around Trump are working to identify who might be able to communicate to him the stark reality. There has been talk of potentially Jared Kushner or Ivanka Trump, though their willingness to lead a difficult intervention wasn’t clear.

One idea being floated is framing potential conversations with Trump around the idea of preserving his brand for life after being president — and explaining that dragging out an election he clearly lost would ruin his businesses and forestall whatever political future he’s hoping for.

Before the election, Trump raised the prospect of running for President again in 2024 if he were to lose, though only in a joking manner. Even in likely loss, Trump garnered more votes than he did in 2016 and his future role as a Republican kingmaker seems secured — though some fear a drawn out and ugly loss could damage his standing.

Trump has spent the days since election night ensconced at the White House, angrily phoning allies and demanding that more people come out to defend him. He has complained that his legal team is ill-prepared to wage an effective battle in courts, according to one person who spoke to him.

He sounded downtrodden during an evening statement from the White House on Thursday and departed the room without answering for his false claims about voter fraud.

In meetings with his team in the Oval Office and the White House residence, Trump has asked why more Republicans weren’t coming out to allege voter irregularities or make the same claims he was making about votes being counted after Election Day.

He also pressed them into arranging a public statement, something he’d been itching to do since Wednesday. Aides had successfully stalled, believing anything the President said would damage his standing and make matters worse.

But after Biden spoke from near his home in Wilmington, Delaware, on Thursday afternoon, Trump insisted a statement be added for him to detail his legal case.

Afterward, several advisers said the performance was precisely what they’d hoped to avoid.

CNN’s Jamie Gangel and Jeremy Diamond contributed to this report.

Dunking on Nevada Got the Internet Through Election Week

Chinese autonomous vehicle startup Pony.ai raises $267M at a $5.3B valuation, and says it has raised a total of $1B to date (Arjun Kharpal/CNBC)