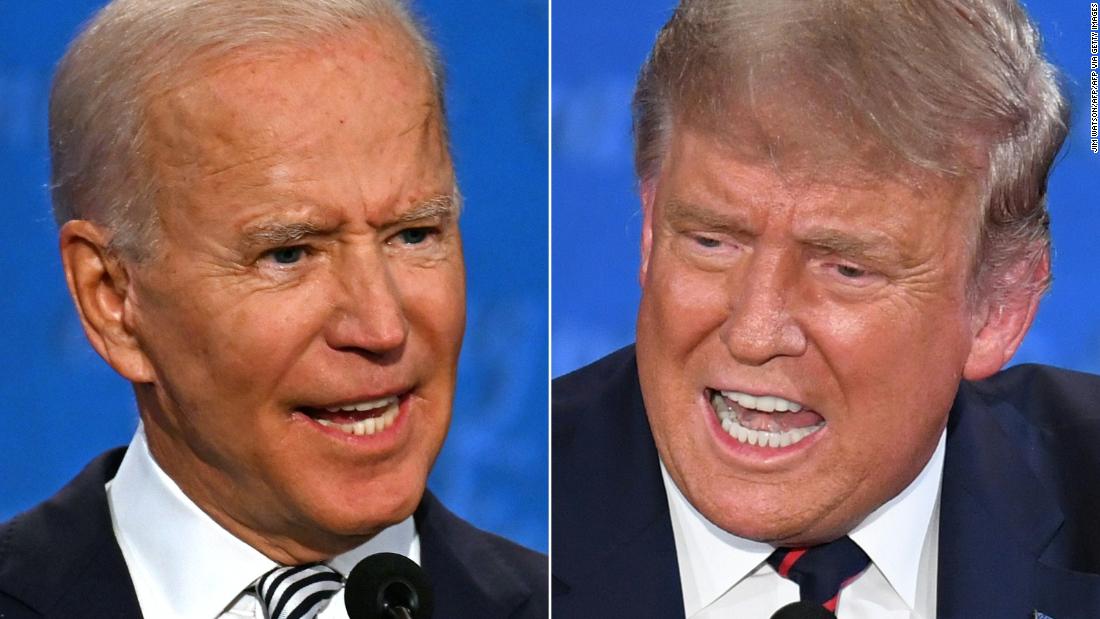 It would have been an extraordinary, self-pitying and savage performance from a down-ballot candidate, but for a President, in control of the nuclear codes, who is supposed to be navigating the country through the worst health emergency in 100 years, the most punishing economic slump in 90 years, and the deepest racial reckoning in 50 years, it was troubling in the extreme. And on top of all that, Trump’s warning that he would not accept the result of the election if he loses displayed authoritarian instincts that are creating a fourth crisis by putting US democracy itself on the line.

His refusal to condemn White supremacists and direction to the neo-fascist group Proud Boys to “stand back and stand by” was shocking in such a venue. But that it was hardly surprising given the last four years underscored the stakes of the approaching election — and he utterly failed to accomplish his core goal of broadening his support in a race in which he is trailing.

“The commander in chief refused to condemn white supremacy on the global stage in front of my children, in front of everybody’s families and he was given the opportunity multiple times to condemn White supremacy,” said Van Jones, a CNN commentator and former Obama administration adviser who has also worked with Trump’s White House on criminal justice reform.

It would have been an extraordinary, self-pitying and savage performance from a down-ballot candidate. But for a President, in control of the nuclear codes, who is supposed to be navigating the country through the worst health crisis in 100 years, the most punishing economic slump in 90 years, and the deepest racial reckoning in 50 years, it was troubling in the extreme.

Inadvertently, Trump’s blow-ups played into the central argument Biden and a small band of dissident Republicans are trying to sell to half of the country that is not a loyal Trump supporter or inclined to support him. That is whether the misbehavior and personal lawlessness displayed by Trump on Tuesday night is appropriate in a President and offers an escape from desperate times.

The clash between the two men dueling for the White House on November 3 didn’t merit the term debate. CNN’s Dana Bash accurately described the conflagration as a “sh*tshow.” But there was only one candidate to blame for that.

Trump blasted through rules agreed by his campaign for equal time. Biden’s attempts to get a word in just led to confusing noise. If he waited the President out, Trump just went on a tear, with Wallace haplessly trying to rein him in — like all White House aides have for four years.

“Will you shut up, man?” the Democratic nominee, who mostly resisted Trump’s goading, snapped at one point, for a moment behaving more like a frustrated viewer who might have tuned in to hear clues about how the President plans to navigate America through a moment of national peril.

Trump had no good answers on the pandemic, blaming it on China, claiming millions more would have died had Biden been president, undermining masks and vowing to overrule his scientists on whether a coming vaccine was safe.

Biden may have won by default

Biden, playing the role of conventional politician caught in a demagogic tsunami, wasn’t especially impressive, and at times lacked gravitas himself, by blasting Trump as a “clown,” “a fool” and “Putin’s puppy.” His answer on the vacant Supreme Court seat of the late Ruth Bader Ginsburg won’t exactly have liberals rushing to the polls to support his moderate campaign.

But while the debate was a disservice to democracy, Biden was not an equal offender in sending it into the gutter.

Coming into evening with a polling lead, the 77-year-old former vice president’s main task was to give the lie to Trump’s claims that he barely knows where he is and can’t string two words together. He certainly did that — showing energy right through to the end of the debate. He could hardly fail to look more statesmanlike than the raging tantrum across the stage. And on the pandemic, the economy and on race, the Democratic nominee aimed some substantive jabs against the President — turning to address Americans watching at home directly, if any of the millions of viewers were able to hear them above the cacophony.

“He doesn’t have a plan. The fact is, this man doesn’t know what he’s talking about,” Biden said, condemning the President’s efforts to eradicate Obamacare without providing a realistic alternative.

“How many of you got up this morning and had an empty chair at the table because someone died of Covid-19?” Biden asked, blaming Trump for his mishandling of the virus for thousands of US deaths.

“It is what it is, because you are who you are,” he told Trump.

A CNN poll of debate watchers handed the night to Biden by a wide margin — 60% of respondents said Biden won, while just 28% gave the night to Trump.

But the debate will not be remembered for Biden’s performance, which was less impressive than Hillary Clinton’s four years ago. Unusually, the question coming out of the debate is not who won and who lost. Sometimes it takes days for the exchanges between two amped up candidates to percolate through public opinion. And the winners of first debates have often not ended up repeating their victories at the polls — including Democrats John Kerry and Hillary Clinton and Republican Mitt Romney.

But any reasonable analysis of the evening must ask whether Trump destroyed his own presidency and hopes of a second term with a seriously over-torqued performance and whether he can repair some of the damage in the two subsequent debate clashes with Biden.

One of the Republicans who took on the impossible task of trying to prepare an uncontrollable President for the debate admitted on ABC News that his candidate had come on far too strong.

“With all that heat … you lose the light. That potentially can be fixed. Maybe, maybe not. We’ll have to see, on the Trump side.”

Democratic vice president nominee Sen. Kamala Harris of California told CNN’s Jake Tapper that the American people had seen on screen what they have now as President and what Biden could bring.

“I heard what we all heard: the President of the United States, in the year of our Lord 2020, refuses to condemn White supremacists,” she said.

Trump needed to widen his base

Trump’s unshakably loyal supporters likely loved his refusal to bow to debate rules just like they warmed to his subversion of all the norms and traditions of the presidency. They will also warm to his invective and insults. The idea that Trump, unlike any other politician, channels their anger at Washington politicians like Biden who they believe backed trade deals that sent their jobs overseas, will remain powerful.

And Trump’s rhetoric on culture and race is a powerful motivating force for his grassroots voters. Every Biden misstep and some clumsy answers on issues such as climate change and mail-in ballots will also be relentlessly highlighted by Trump’s friends in the conservative media. In that sense, the aftermath of the debate will be an appropriate reflection of a country internally estranged.

But Trump’s task heading into the evening was to repair his ebbing support, especially in swing states, with suburban and especially women voters. It doesn’t seem likely the flame-throwing performance by a 74-year-old man was the best way to accomplish that goal. Trump’s tactics, such as they were, seemed to be in line with his campaign’s insistence that there is a “silent majority” of Trump voters who will flock to the polls and will overwhelm conventional Washington wisdom again. If they are right, he still has a chance to cut Biden’s leads in swing states.

The President’s best moments of the night came when he appeared to silence Biden with his relentless attacks on “law and order” but, as has often been the case, he might have ruined his victories with his own extreme instincts.

Asked by Wallace, and by Biden who sensed an opening, to condemn White supremacy, he couldn’t bring himself to do it. Instead he equivocated on the Proud Boys group, a far right neo-fascist organization — much as he did when asked to pick a side in white extremist activists in Charlottesville, Virginia.

Shockingly, Trump reinforced his threats to refuse to concede a possible loss in the general election and indicated that he would very much like the Supreme Court, including his nominee Amy Coney Barrett, to decide the result in what would likely mean the country’s worst-ever constitutional crisis.

He asked his supporters to go to polls and “watch very carefully” what happens while making fresh and unsubstantiated claims of mass ballot fraud.

“If it’s a fair election, I am 100% on board. But if I see tens of thousands of ballots being manipulated, I can’t go along with that,” Trump said.

Biden, in another of his to-the-camera moments, pleaded with Americans to take the election seriously and making their votes count.

“This is all about trying to dissuade people from voting because he is trying to scare people into thinking that’s it’s not going to be legitimate,” Biden said.

Trump made it clear on Tuesday night that he will do anything to cling on to power, and that he won’t go quietly. The next five weeks are now certain to be even more tumultuous than had already been the case.