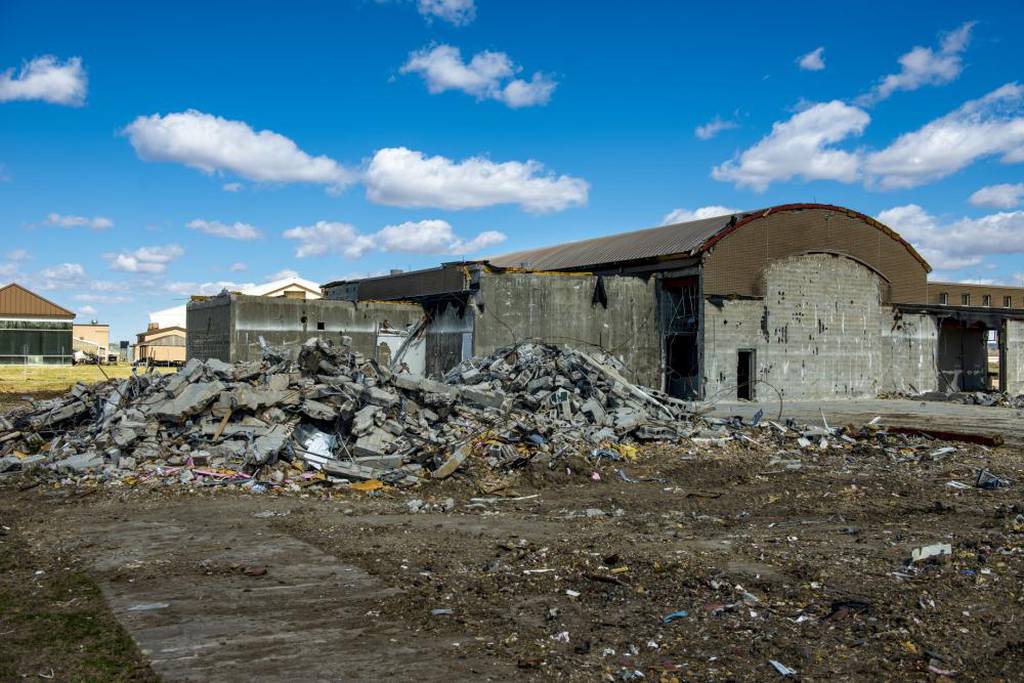 OFFUTT AIR FORCE BASE, Nebraska — The floodwaters that swallowed around one-third of this base in suburban Omaha are long gone. But three years later, Offutt’s airmen are still fighting to stay afloat.

Most employees have not returned to their former workspaces, some of which were freshly renovated before the flood hit in March 2019. It will be several more years before they can move back into offices that promise to be better than what they lost.

The mess is a sign of progress — and a reminder that Offutt will be worse long before it gets better.

“There’s three inches of mold growing in here. We’ve had concrete failures. We’ve had sewer lines ruptured,” said Maj. Eric Armstrong, deputy director of the effort to rebuild Offutt, told Air Force Times during an April 25 visit. “The damage is internal to the facilities … so getting people to comprehend that has been a struggle, at best.”

More than 130 facilities were affected, including buildings holding classified intelligence data and areas where the water reached 5- to 6-feet deep. Over 3,000 personnel were displaced from their offices in a base that employs around 10,000 service members and civilians.

Restoring the base — parts of which date back to the late 1800s — was originally slated to cost $350 million. That’s spiked to more than $1 billion as the goal changed from a simpler replacement to a broader reimagining of the installation, according to Rep. Don Bacon, R-Neb., who served as 55th Wing commander at Offutt from March 2011 to July 2012.

The rebuild’s timeline has also stretched to around 10 years overall.

In their makeshift, temporary offices elsewhere on campus, airmen walk to work through dimly lit corridors, alongside hulking heating and cooling and other utility units, into basements and windowless rooms that are ill-suited for Offutt’s classified and niche intelligence operations.

Though Offutt was able to keep the mission going in spite of the flood, carrying on in subpar workspaces is tricky. It’s different than at Tyndall AFB, Florida, where a direct hit from Hurricane Michael in 2018 initially forced F-22 Raptor fighters and other units out to other bases.

“We went from six jets deployed down to five jets deployed to ease that a little bit, but that’s — for this wing — still a significant amount of work to be done,” Armstrong said. “Tyndall got to shut down operations and call it good.”

Offutt is home to some of the Pentagon’s most specialized reconnaissance airborne intelligence assets, temporarily operating out of the Lincoln Airport while the runway is rebuilt. Its airmen fly the RC-135V/W Rivet Joint, an electronic warfare platform, and three other variants: Combat Sent, which intercepts various electronic signals; Cobra Ball, which tracks ballistic missile launches; and Constant Phoenix, which tests the air for radioactive material.

Does America need its ‘Doomsday plane’?

The E-4B National Airborne Operations Center — also known as “Nightwatch” — is built to withstand a nuclear attack and keep the federal government running from the skies.

The base also supports the 55th Wing’s EC-130H Compass Call electronic attack fleet at Davis-Monthan AFB, Arizona, and the Air Force’s E-4B and the Navy’s E-6B airborne command centers. It served as the longtime home of the two OC-135 Open Skies planes used to monitor foreign militaries under an international treaty.

But down in a nondescript, bootstrapped cubicle farm, these airmen don’t feel special.

Intel analysts and others with the 55th Intelligence Support Squadron have gotten used to a parade of Washington VIPs and reporters visiting their office for a glimpse of the new normal. A ladder sits underneath a missing ceiling tile where passersby can pop up to see where part of the ceiling crumbled, raining water, concrete and debris onto a contractor’s desk below.

“Let us know if you see any wildlife,” Armstrong quipped.

When they first moved into the basement of the Glenn L. Martin Bomber Plant, known for building World War II-era B-29 Superfortress bombers, airmen had to sit three to a computer. Hundreds of airmen were split into shifts because the space can’t accommodate everyone at once.

“They didn’t have a solution, so they literally just threw two units down here and they’re like, ‘We’ll figure it out,’” said Tech. Sgt. Sara Neuhaus, executive assistant to the 55th ISS commander.

Though not 100% back to what they could do before the flood, the squadron has now received enough of the systems they need to work, she added.

Airmen who work here crunch the information gathered by 55th Wing planes and share it with the National Security Agency. They also handle the process of upgrading the jets with new systems as different types of electromagnetic signals become important in daily operations. They support the fleet’s travel around the world and make sure crews have what they need around the clock.

Right now, much of that focus is on Rivet Joint operations in support of the Ukrainian military. Without flying into Ukrainian airspace, the RC-135 can vacuum up radio signals and radar data from the ground, essentially eavesdropping on Russian military movements.

U.S. intelligence has helped Ukraine kill several Russian generals on the battlefield and sink the Moskva, considered Russia’s most powerful warship in the Black Sea.

“Our partners may get certain aspects of what we’re collecting, in that if it is a threat to our partners, we’re able to tell them,” Armstrong said. “We may not have to give them the whole ‘who, what, why and where,’ but we can tell them that, ‘Hey, there’s something dangerous and watch out.’”

Those airmen are forced to work underneath a parking garage, where vehicles inadvertently pump toxic gases into the office below.

“If a truck is parked next to one of the intakes somewhere too long, exhaust fumes come inside,” said Master Sgt. Ben Reavis, the squadron’s incoming senior enlisted leader.

In another instance, the unit had to evacuate when a gas-fueled torch maintainers were using outside expelled fumes into the building, prompting the service to launch an air quality study. On a regular basis, airmen get headaches and have to leave work.

“That’s one of the bigger issues of this facility in particular … than another place where, yeah, it’s kind of junky, but we weren’t getting poisoned,” Reavis said.

The airmen are waiting for the OK to move out of their basement and into Building 500, the old Strategic Air Command headquarters, as an interim office before brand-new ops facilities are done in 2028. They could relocate later this year.

Their move has been on hold because Congress didn’t approve new federal spending until about six months into the fiscal year. That kept the Air Force from paying AT&T to install modern IT networks in Building 500 so airmen could do their jobs.

More than half of the office space that Offutt personnel used to view and discuss classified intelligence data was lost in the flood. That has significantly slowed the process of analyzing the information collected and making decisions about using it.

Lt. Col. Samuel Greenwell, director of the 55th Wing’s operations center, commended airmen for doing what they can to make the space workable.

“In other environments, you’d hear a lot of disgruntled comments,” he said. “People really, by and large, just say, ‘Hey, this is part of the job, gotta get it done, and they get in there and do it.’”

The 97th Intelligence Squadron — the Air Force’s largest flying squadron at about 500 airborne reconnaissance analysts, cryptologic linguists and signals experts — secured funding to paint and install new carpet on their own in a 20-year-old secure space that was abandoned.

They’ve also spruced up a room where linguists can practice their foreign language skills and opened an “innovation lab” to tackle problems facing the 97th.

But the interior decorating is still a stopgap before they, too, move to Building 500.

“We are embracing the suck as best as possible,” said Staff Sgt. Bobby Brown, a Chinese language specialist and program manager in the 97th IS.

Offutt is in the demolition and preparation phase of its rebuild plan, in which contractors tear down old facilities and lay the dirt for eight new sets of buildings.

As part of that site prep, exteriors of buildings that appeared less damaged in the flood’s immediate aftermath now better reflect the destruction inside.

A security forces building undergoing asbestos remediation was stripped down and surrounded by rubble; glass, tree branches and other debris littered the area. A towering pile of rotted desks, office chairs and other workplace trappings sat outside the former 55th Operations Group headquarters in mid-cleanout.

One man told Air Force Times he had hung up a new suit jacket in his office the night before the flood, only to find a dead fish in the pocket when he came back to retrieve it.

“There’s still people’s pictures from their kids hanging at their desks and stuff like that, and we ripped all that out,” Armstrong said.

Some facilities, like a simple storage building at Offutt’s recreational lake, are easier to check off the list. Others will take a bit longer.

Offutt’s campus is being reorganized and consolidated into areas for nuclear command, control and communications; satellite communications; the 55th Operations Group and its partners; cargo logistics; security forces; the base lake; the flightline and the emergency power grid.

Construction on the fastest projects is slated to take 18 months; the operations campus is the slowest at more than four years. Design and contracting for each adds time, as do delays spurred by Offutt’s overworked but understaffed 55th Civil Engineering Squadron..

Part of that work involves predicting how the mission may change in the future.

For one, new jet simulators will be able to train airmen on multiple RC-135 variants for the first time, instead of the Rivet Joint alone. They’ll also connect to simulators of other platforms for exercises in the virtual realm.

“We never know what our next role is going to look like,” Armstrong said. “We’ve done a lot of design effort in [the operations facility] to make it as flexible as possible.”

Officials are considering how to create areas that can change what level of classification is needed at will. In a major shift for the “Five Eyes” intelligence-sharing coalition, Offutt wants to open those facilities to the United Kingdom, which also owns RC-135s, and to incorporate troops from Australia and New Zealand.

“Say we have a massive increase in U.K. integration and we need to increase that space,” Armstrong said. “We’re going to take the walls down without changing the classification of the space, and increase the size and make the space flexible and useful for what that future mission looks like.”

He urged airmen to continue their patience and have faith in the process.

“Having construction occur gives them the visual representation that things will get better,” Armstrong said. “It’s not going to be next year.”