TikTok is swooning over a new kind of celebrity: election analysts 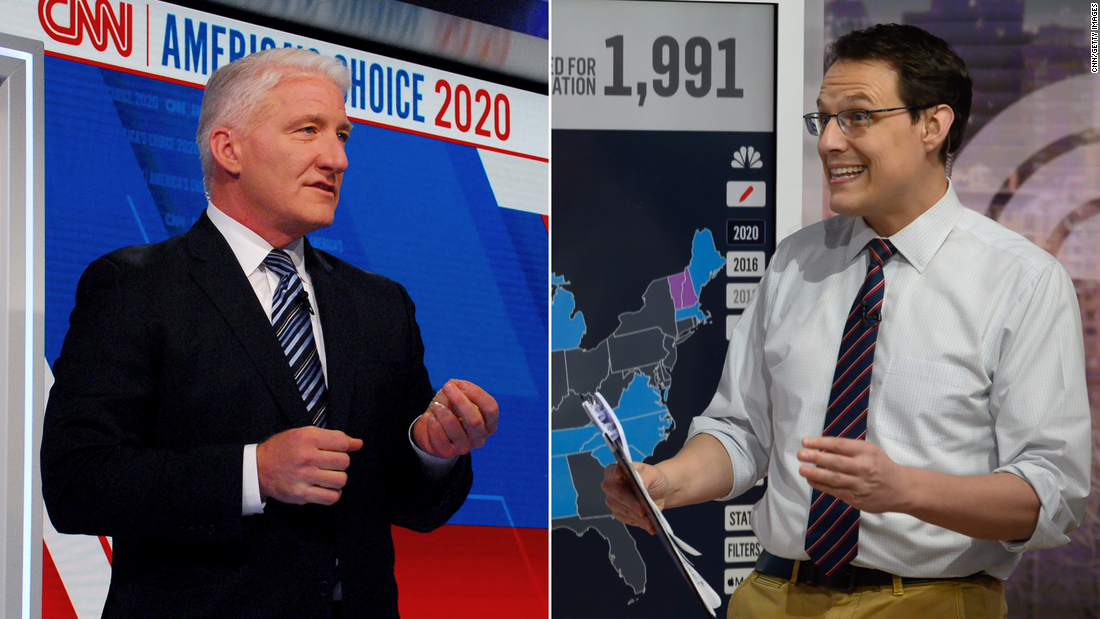 Well, this week, users found a new subject to fixate on: election analysts.

As the election drags on and Americans are glued to their TVs following every twist and turn, journalists like CNN’s John King and MSNBC’s Steve Kornacki — who are helping helping us make sense of the electoral college drama — are enjoying the adulation normally reserved for K-pop stars.

TikTok users are uploading videos of the two on-air personalities, complete with upbeat, catchy songs as the backdrop.

In one, a montage of photos of Kornacki is played to “Be My Baby” by The Ronettes. In another, the camera zooms in on King in front of the electoral college map. “I guess I’m just a play date to you,” Melanie Martinez croons in the background.

A simple search on TikTok highlights just how popular these famcams have become.

The hashtag #johnking has 2.5 million views; #stevekornacki has 81,600 views; and #election2020 — which of course encompasses more than just election analyst-related videos — has 1.1 billion views. (TikTok did not immediately respond to a CNN Business request for comment.)

“These fancams are a way for users to redirect their anxiety,” said Ioana Literat, an assistant professor at Teacher’s College, Columbia University. She researches youth, political expression and social media.

“This stanning, even sexualizing, is so much more lightheartened than just doom scrolling,” she told CNN Business.

By Thursday afternoon, Emma Kraft had been watching King’s recap of the presidential race with her friends for hours.

Kraft used screenshots and screen recorded footage of King, as well as the “green screen” feature on TikTok, to create her fancam. She set it to the tune of Nicki Minaj’s “Pound the Alarm” — a popular choice.

“I’m not surprised at all that other people are making fancams for him,” Kraft said. “I don’t think what we’re doing is having a direct impact, but it’s a way to have fun with the election.”

Maya Beydoun is 17, too young to vote. But she still wanted to show her appreciation for Kornacki.

“I remember just watching and thinking ‘I’m going to make an edit,'” she told CNN Business. “He’s just been working so hard. He deserves it.”

Beydoun, who is a frequent fancam maker of popular K-pop group, BTS, spent an hour compiling footage of Kornacki, and set it to Zack Knight and Jasmine Walia’s “Dum Dee Dum.”

“There’s a respect for knowledge and working towards social good,” Literat said. “Young people are looking at these individuals as symbols of hope.”

Earlier in the election cycle, TikTokers used the platform to show their candidate preference. They roasted Mayor Pete Buttigieg and now-Democratic presidential nominee Joe Biden.
A group of TikTokers tried to troll President Donald Trump’s campaign by reserving tickets for his Tulsa rally in June that they didn’t plan on using.

“TikTok is seen as their turf, it’s their public sphere,” Literat said. “But these practices precede TikTok. This is a way that (Gen Z and millennials) feel connected to their peers, and it’s shaping how the political discourse is happening. These practices are going to continue.”

Realizing that, groups on the political left and right, as well as nonpartisan civic organizations, put money behind TikTok creators to turn out the youth vote.
Influencers have become their own political pundits, helping shape how the next generation participates in democracy. Some have formed their own party-based coalitions or hype houses.

Sara Linthicum, who posted a fancam of John King to Twitter, said that she sees fancams all the time on the site. Her video stitched together clips of King from CNN and YouTube to Minaj’s “Good Form.”

“[My family and I] were all just sitting there, waiting for the results and just watching him with the map,” she told CNN Business. “Making the fancam was just a really good distraction from anxiously waiting for more results.”

The analysts are digging it

So what do the election analysts think of these fancams?

MSNBC didn’t immediately respond to a CNN Business request for a comment. But the network posted a video on Twitter and TikTok of Kornacki — away from the map — in which he thanked his fans.

“You may not recognize me, there’s no giant touch screen behind me,” he says in the video. “I just wanted to say, I saw after I finally left the studio all these incredibly kind and friendly and nice messages everybody had on social media.”

As for King, he said he is grateful for the compliments. He’s been responding to fans on Twitter (including to one user who shared her fancam video).

“I have a 9 year old son who is a TikTok fan and user, and so having famcams is an honor and gives me a little credibility now with my son,” King said.

“But more importantly, it is proof people are engaged in the election and looking for ways to connect to the story.”

He also thanked his new fans and left them with a message.

“My message to any new ‘fans’ is to channel that interest and energy into the issues they care about — beginning in your local community. “

MediaTikTok is swooning over a new kind of celebrity: election analysts - CNN
29
Share