This Is How the Outbreak Is Resurging Across New York City 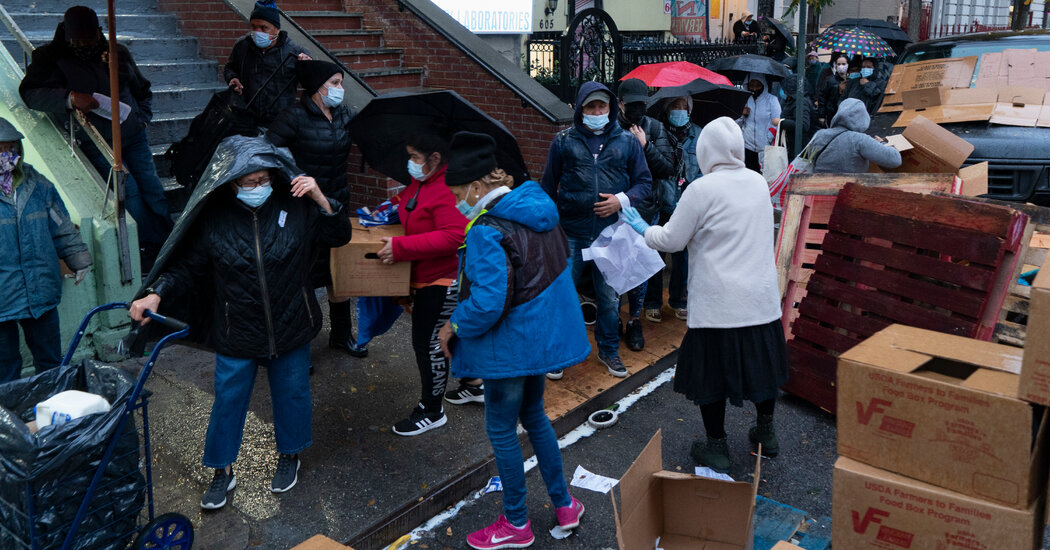 At first, New York officials tracked the resurgence of the coronavirus to a few neighborhoods in the city with large populations of Orthodox Jewish residents.

Then, those hot spots began to expand, leading to restrictions. But now, the coronavirus is spreading through the entire city, with cases surging in beachfront communities in Staten Island and corners of the Bronx, and seeding new outbreaks in parts of Queens that were among the hardest hit areas during the peak of the virus in the spring.

The number of new cases has climbed to the point where officials are struggling to untangle chains of transmission and make sense of how the virus is spreading. Now they are facing the reality that they are dealing with a surge that will linger for weeks, if not months.

“Just a matter of time,” Mayor Bill de Blasio said of new restrictions on indoor activities and businesses at his news conference on Thursday.

After a summer of dwindling transmission, New York City is in the grips of a second wave.

On Wednesday, after the seven-day rolling average positivity rate in the city hit 3 percent, Mr. de Blasio ordered the closing of public schools and hinted that other changes were coming. On the same day, Gov. Andrew M. Cuomo warned that citywide restrictions on mass gatherings, indoor dining and houses of worship could follow in the coming weeks if the numbers continued to worsen.

They do each day.

The numbers show a rise across the city

More than 10,000 new cases of the coronavirus have been diagnosed this past week. At hospitals, doctors who worked through the surge in the spring are growing anxious once again, as more than 700 people in the city are hospitalized with the virus. Over the last week, there have been 44 deaths in the city.

In numbers released on Thursday, 38 ZIP codes in the city had a seven-day average positive test rate of more than 4 percent. Nine had rates above 5 percent.

Queens has been averaging more than 300 cases a day in the past week, the most of any borough, according to the city’s data, in areas as varied as Elmhurst and Corona, which have a large number of Latino residents and were struck hard during the outbreak, and Breezy Point, a private beachfront community that is more than 90 percent white.

While cases are surging, epidemiologists and public health experts do not expect the second wave to be as bad as the first, when ambulance sirens filled the air, emergency rooms overflowed with patients, and more than 20,000 New York City residents died. But there is growing concern.

Last week, a group of health organizations and doctors sent a letter to Mr. de Blasio and Mr. Cuomo warning that they were waiting too long to impose new restrictions “to reverse the tide of new infections.”

The group, which calls itself the Covid-19 Working Group-New York, had urged Mayor de Blasio in early March to impose social distancing measures and restrictions, only to see the city wait, possibly costing thousands of lives. Now the group sees the current hesitancy for new restrictions — including the closures of indoor dining and gyms, which are both thought to give rise to a disproportionate number of infections — as a repeat of the spring.

“As we warned in our previous letter, non-pharmaceutical interventions can only save lives and preserve hospital capacity if the city acts early,” the letter read. “If we wait too long to implement these interventions, as the city did in March, we will suffer the same economic and social costs, but many more New Yorkers will die.”

Over the last two weeks, city health officials have put a number of options before the mayor and his aides, according to one city official familiar with the discussions, who spoke on condition of anonymity to discuss internal deliberations.

But days kept passing without the mayor taking action. The mayor has largely acquiesced to the idea that restrictions on businesses must come from the governor. Mr. Cuomo has stuck to his plan to wait to impose restrictions until the city hits certain statistical thresholds.

Even the one big decision the mayor has made, to close schools, has caused consternation among many parents and some epidemiologists and public health officials who believe public schools should be one of the last institutions to close, not the first.

Little evidence has emerged to suggest that schools in New York City were driving much transmission, which the mayor and his top health officials readily acknowledge. In fact, cases detected among adult staff members at schools have outnumbered those detected among students, easing fears that the city’s public schools would play a major role in spreading the virus.

From microclusters to a citywide surge

As recently as mid-August, the city was averaging under 250 cases a day. Rising transmission in a few corners of the city — the Borough Park neighborhood of Brooklyn and Far Rockaway, Queens, for instance — led to a rising case count throughout September, prompting Mr. Cuomo to impose localized restrictions. Those hot spots, many coinciding with Orthodox Jewish neighborhoods, seemed to improve in October.

But then the situation began worsening across the entire city. At the end of October and into early November, the case count surged at an accelerating rate, alarming city health officials.

On Thursday, Mr. de Blasio said that an average of 1,255 new cases a day had been detected over a recent seven-day stretch.

And the numbers that the city releases appear to be an undercount, as New York City’s statistics only include cases diagnosed with a polymerase chain reaction, or P.C.R., test — considered the gold standard.

Increasingly many people are getting antigen tests, which tend to be faster but are less likely to detect low levels of the virus. New York City does not yet include people who received a positive result through an antigen test in its official counts, contributing to a disparity with the figures released by the state.

New York State, which includes antigen tests in their count, has said that the new case count in New York City has climbed above 1,800 on some days over the last two weeks. The city’s daily count hasn’t surpassed 1,500 this month.

The spread has gotten too big to track

So far, officials have provided only the faintest description about what they have learned about what locations or activities are driving current transmission.

About 10 percent of cases of late seem to originate with travel outside of New York, the mayor has said. Another 5 to 10 percent of cases have been linked through contact tracing “back to gatherings or small events,” said Dr. Ted Long, a senior official with New York City’s Test and Trace program, adding that contact tracing has not turned up any “superspreader events” of late.

Another 5 or so percent are linked to nursing homes and other group homes, said Dr. Jay Varma, a senior adviser to the mayor.

But officials say they have little sense of where most other infections originated.

The percentage of cases that contact tracers cannot link to a particular event or place has been increasing as the numbers get worse, officials say.

No consensus on what to do

There is hardly unanimity from outside experts about how to respond to the spread, although most agree it’s time for action.

“We need to be ahead of the curve and not be quite so slow in acting on our information,” said Dr. Jessica Justman, an epidemiology professor at the Mailman School of Public Health at Columbia University.

In interviews, epidemiologists proposed a range of options the city should be considering, from shutting down gyms and tightening up quarantines for travelers to more comprehensive public health advice that went beyond exhortations to wear masks and wash hands.

Denis Nash, a former health department official and professor of epidemiology at the City University of New York’s School of Public Health, said that it was time for the public health advice to grow more nuanced.

“I’ve been struck by the lack of harm-reduction language,” he said.

Another epidemiologist, Kitaw Demissie, who is dean of the School of Public Health at SUNY Downstate Medical Center, in Brooklyn, said that many infections seemed tied to small group gatherings of friends and family — and that reducing transmission required finding ways to convince people to wear masks indoors more often.

“Changing behavior is very, very challenging,” he said, but added that public health officials could be offering more nuanced advice. If people were going to gather for Thanksgiving, for instance, there was no need to eat together at the table — why not encourage them to spread out around the kitchen and living room?

“I’m shocked that City Hall seems to have learned so little from what happened in March,” said James Krellenstein, an H.I.V. activist and member of the Covid-19 working group who helped organize the Working Group-New York letters. “We don’t have time in an epidemic to dither.”

Improving quantum dot interactions, one layer at a time

How DirectX 12 Ultimate supercharges graphics on Windows PCs and Xbox