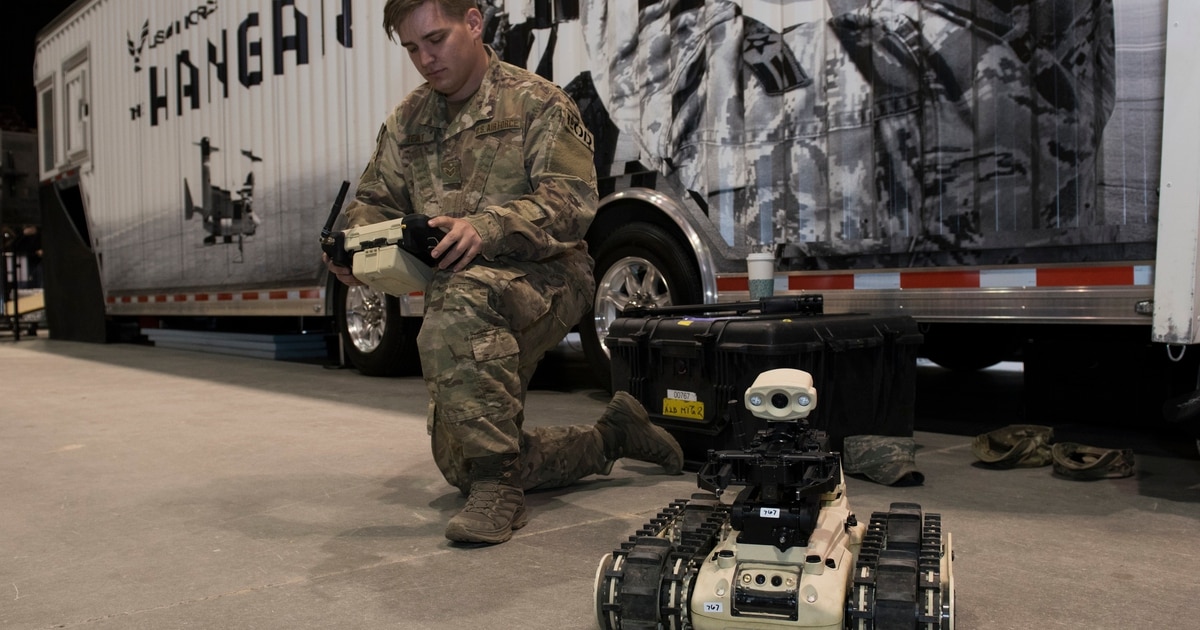 WASHINGTON — A year after the U.S. Army awarded a contract to build a heavy-duty robot able to dispose of bombs and other explosives, the Air Force is looking for its own system — and it wants to see what’s on the market before committing to purchasing what the Army buys.

The Air Force in October released a solicitation for a large explosive ordnance disposal robot, a commercial off-the-shelf system equipped with a maneuverable arm and a camera system that can function in all terrain types, environments and weather conditions.

An Air Force spokesman declined to confirm how many companies submitted bids for the program, which were due Nov. 20.

One competitor has already come forward: FLIR, which is set to rake in as much as $109 million building its Kobra robot for the Army’s Common Robotic System-Heavy program. The company began full-rate production of Kobra last month and is confident the Air Force will follow the Army’s example by choosing the same system.

QinetiQ, which lost out to FLIR in the CRS-H competition, did not respond to a query about whether it had bid on the Air Force program.

At times, the Air Force has joined Army robot programs without needing to hold a competition. But in the case of larger EOD robots, the two services have differing requirements that have led the Air Force to seek out its own system instead of jumping into the CRS-H program, said S. Chase Cooper, a contracting officer who is managing the EOD robot solicitation on behalf of the Air Force’s 772nd Enterprise Sourcing Squadron.

Cooper also pointed to additional considerations such as the size and weight of the system.

Most Air Force EOD missions occur after bombs or other improvised explosive devices are found at a base or installation. When that happens, teams load robots and other gear into a Base Response Vehicle or Bomb Squad Emergency Response Vehicle, drive out to the location of the explosive device, and safely dispose of the explosive. Whatever robot the Air Force chooses must be small enough to fit inside those vehicles, Cooper said. That includes passing through a 32-inch-wide door opening and parking into a space 91 inches long and 63 inches high.

The Air Force’s requirement for weight, which is set at a maximum of 1,000 pounds, is less stringent than the Army’s 700-pound limit. The Air Force also called for a system with a minimum 800-meter, line-of-sight radio range, and a 3-hour runtime that will allow it complete the majority of EOD missions.

Cooper noted that the Air Force’s decision to pursue an open competition does not preclude the FLIR robot from being chosen by the service.

“It is unknown at this time if that system would meet our requirements,” Cooper said. “Through our contracting process, we are evaluating all of the proposed large robot systems against the Air Force’s requirement so we can make sure the system we purchase is the best one for our airmen.”

The Air Force has a history of both collaborating with the Army on EOD robots and going its own way. For its medium-sized unmanned ground vehicle, the Air Force opted to use the Army’s existing contract under the Man Transportable Robotic System Increment II program for FLIR’s Centaur UGV, which is also being purchased by the Navy and Marine Corps.

But while QinetiQ beat out FLIR in the Army’s competition for CRS-Individual — a man-packable robot that is less than 25 pounds — the Air Force ended up pursuing a separate contract to meet its own unique needs for small unmanned ground vehicles.

In a letter to Sen. Wyden, ODNI says FBI used Section 215 of the Patriot Act to collect website visitor logs without a warrant, but not keywords from searches (Charlie Savage/New York Times)

NATO must find a unified voice to talk about — not to — China, advisers find