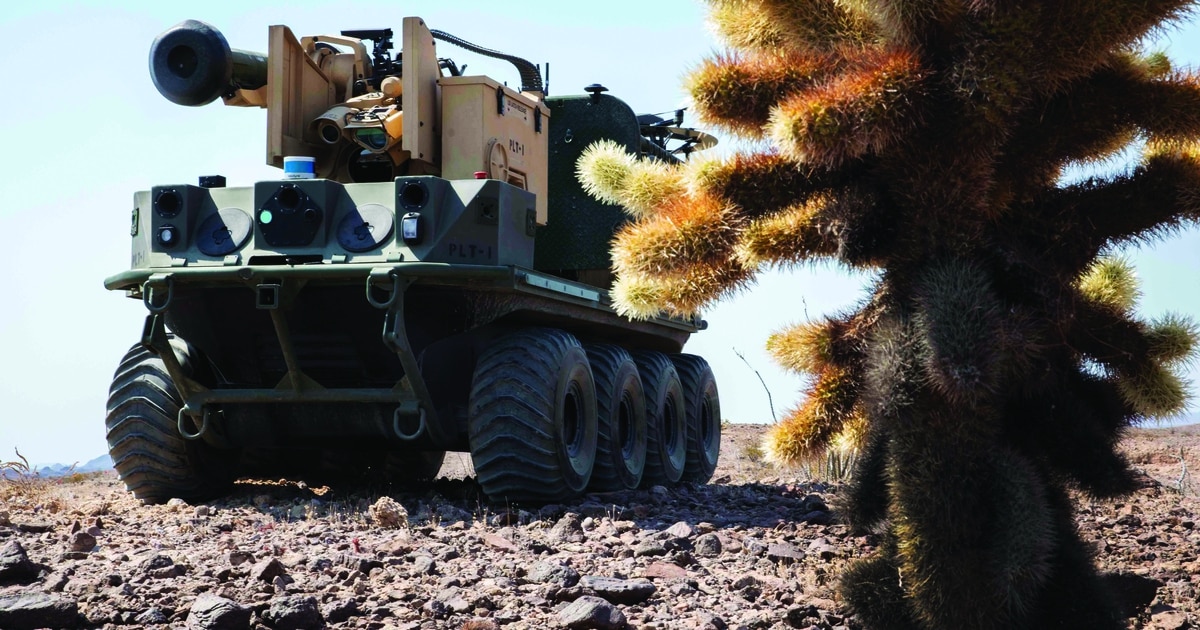 WASHINGTON — After years of sometimes contentious discussions, the Army and Air Force have adopted a plan to work together on what they are now calling Combined Joint All-Domain Command and Control — the idea that all of the U.S. military’s sensors and shooters must be able to send data to each other seamlessly and instantaneously.

The agreement, signed Sept. 29 by Air Force Chief of Staff Gen. Charles Brown and Army Chief of Staff Gen. James McConville, paves the way for closer collaboration on “mutual standards for data sharing and service interfacing” that will ultimately allow the services to ensure that new communications gear, networks and artificial intelligence systems they field can connect to each other, reducing the risk of incompatibility.

But much is still unknown, including the exact nature of the Army-Air Force collaboration and how much technology the services will be willing to share.

Army Futures Command and the Air Force’s office of strategy, integration and requirements are tasked with leading the joint effort, which will bridge the services’ major avenues for CJADC2 experimentation — the Army’s Project Convergence and the Air Force’s Advanced Battle Management System.

Over the next 60 days, the two services will formulate a plan to connect the Project Convergence and ABMS exercises, and ensure data can be transmitted along their platforms, said Lt. Gen. Clinton Hinote, who leads Air Force’s strategy office.

But that doesn’t mean the services are on a path to adopt the same systems architecture, data standards and interfaces.

“What the Army and the Air Force are agreeing to is, we’re going to be able to see their data, they’re going to be able to see our data. And as much as we can, we will come up with common standards,” Hinote said in an Oct. 15 interview. “But even if we can’t come up with common standards, we realize that translators are going to be something that will be with us for a long time, and we will build the translators necessary to make sure we can share.”

The main point of the discussions was to avoid redundancies, McConville told Defense News on Oct. 15.

Ultimately, such close coordination between Army and Air Force leaders only happens once in a generation, said Army Secretary Ryan McCarthy, who pointed to the formation of the AirLand Battle doctrine in the 1980s as the last time they worked together so intimately on a new war-fighting concept.

“I’m very encouraged that we have the Air Staff and the Army Staff investing countless hours,” he said. “We’re laying down the path to get there. And it really starts with cloud architecture, common data standards, and command-and-control systems that you can wire together so that they can share information at the speed of relevance. So that whether it’s an F-35 [fighter jet] or an artillery battery, they communicate with each other to prosecute enemy targets.”

Battle of the AIs

The Army’s and the Air Force’s goals are roughly the same. The services want to be able to take data from any of the services’ sensors — whether that’s the radar of an E-3 early airborne warning aircraft or the video collected by an MQ-1C Gray Eagle drone — and detect a threat, fuse it with other information coming in from other platforms, use artificial intelligence to provide a list of options to commanders and ultimately send accurate target data to the weapon systems that will shoot it, all in a drastically shortened timeline.

Over the past year, the Air Force held three ABMS demonstrations, with the most recent taking place Sept. 15-25 alongside U.S. Indo-Pacific Command’s Exercise Valiant Shield. So far, the service has tested out technology that allows the F-35 and F-22 jets to send data to each other despite their use of different waveforms. It also test tech that connects an AC-130 gunship with SpaceX’s Starlink constellation, and used a high-velocity projectile shot from a howitzer to shoot down a surrogate cruise missile.

All of those demonstrations were enabled by 5G connectivity, cloud computing and competing battle management systems that fused together data and applied machine-learning algorithms.

Meanwhile, during the Army’s first Project Convergence exercise held in September, the service tested a prototype of the Extended Range Cannon Artillery, fused data through a new system known as Prometheus and used artificial intelligence to recommend options for shooting a target.

A Marine Corps F-35 also participated in some tests, receiving targeting information that originated from a satellite, then passing on information from its own sensors to an Army AI system known as FIRES Synchronization to Optimize Responses in Multi-Domain Operations — or FIRESTORM.

Joint Army and Air Force experiments could begin as early as March 2021, said Portia Crowe, the chief data officer of the Army’s Network Cross-Functional Team at Army Futures Command. Crowe, who spoke during a Oct. 14 webinar hosted by C4ISRNET, did not elaborate on what would be tested.

Much of the early collaboration between the Army’s Project Convergence and the Air Force’s ABMS will likely involve plugging in new technologies from one service and seeing if they can successfully send data to the other’s nodes in the experiment, Hinote said.

But that won’t be “where the magic happens,” he noted. “The magic is going to happen in the flow of information, and then the development of that information into something that looks new” through the use of artificial intelligence.

Though Project Convergence and ABMS are still in their infancies, the Army and the Air Force have adopted different philosophies for incorporating machine learning into the “kill chain” — the sensors and weapon systems that detect, identify and prosecute a threat. While the Air Force is largely experimenting with solutions made by contractors like Anduril Industries and Palantir, the Army is mostly relying on government-owned platforms created by government software coders.

“One of the things that I see as being an incredibly interesting exercise — I don’t know if this will happen this year or next year, but I’m sure it will happen — is let’s compare what we were able to do in the government, using government civilians who are coders and who are programming these machine-learning algorithms to come up with the top three actions [to take in response to a given threat],” Hinote said. “And let’s compare that to what [private] companies are doing and their intellectual property. And then, if that gives us insight, then what is the business model that we want to propose?”

But as those technologies mature, Hinote said, the services must answer difficult doctrinal and technical questions: How much should the government be involved in shaping the responses given by the algorithm, and how does it balance that requirement with industry’s ability to move fast? When an AI gives a commander a list of military options, who owns that data?

And how can military operators know the underlying assumptions an AI system is making when it presents a threat to commanders and a set of options for countering it? If they don’t understand why an AI system is recommending a course of action, should commanders feel comfortable using lethal force?

“How do we know enough about the machine learning and algorithms so that their output is useful, but not a surprise to us? And if it is a surprise, how did it get to that surprise? Because if you don’t know that, you’re going to feel very weird about using it for lethal force,” Hinote said.

“Right now we’re kind of feeling our way down that path to see how much trust are we going to have in these algorithms, and developing trust is going to be something you’re going to see over and over and over in both Project Convergence and ABMS onramps.”

The Army and the Air Force aren’t the only military entities driving to make CJADC2 a reality. The Navy recently launched its own effort — Project Overmatch — and tapped Rear Adm. Douglas Small on Oct. 1 to lead it.

Chief of Naval Operations Adm. Michael Gilday has said it is the service’s second-most important priority, falling behind only the Columbia-class ballistic missile submarine.

Coast Guardsmen simulate interdicting a jammer on a vessel in support of an Advanced Battle Management System experiment in the Gulf of Mexico on Sept. 3, 2020. (Staff Sgt. Haley Phillips/U.S. Air Force)

In totality, the U.S. military will have at least three separate CJADC2 initiatives, each fielding their own hardware and software.

There are good reasons for each service retaining their own programs, according to Hinote, as each domain presents unique challenges, and each service organizes itself differently to project power on land, at sea or in the air.

“The Army has been very concerned over scale. They see each of their soldiers as being a node inside the network, and therefore you could have millions of nodes. And they’re very concerned that if this was only Air Force-led, that the scale couldn’t be reached — we would not have the ability to plug in all of those soldiers and nodes in the network,” Hinote said, adding that it’s a valid concern.

He added that the Air Force also has its challenges — namely the difficulty of sending data over long distances, and having to connect aircraft and sensors that may be far away from a target.

But the result is three large, complicated acquisition programs that will need billions of dollars in funding — and potentially compete against each other for money. To further complicate the issue, the military’s existing funding mechanisms aren’t optimized for the fast-paced, iterative experimentation and procurement the services seek.

One way to overcome this might involve creating a Pentagon-wide fund for CJADC2, and then split it among the services, Hinote said. Another option might include designating one service as the executive agent, giving that force organizing authority and the power of the purse. But both come with drawbacks.

“[There are] different models out there, but none of them seem to really fit,” Hinote said. “And so we have been having talks with especially the appropriations defense [committees on] the Senate and House side on what would it look like for a modern military to buy a capability like this, and what would the taxpayers need for understanding that this is good stewardship. And that has not been decided.”