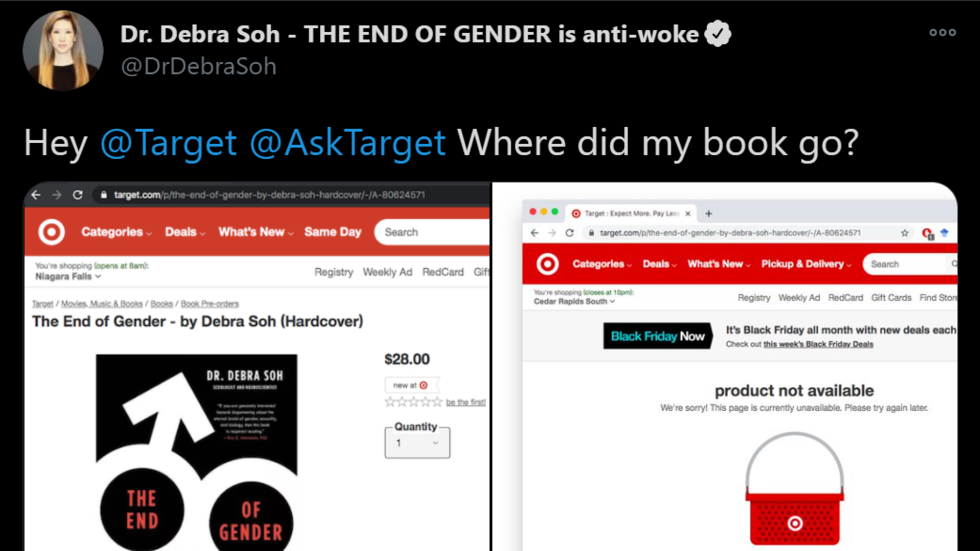 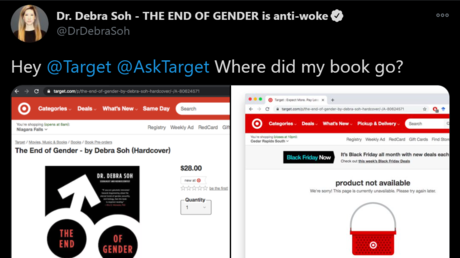 Outraged Twitter users have placed Target in their crosshairs after the retailer apparently pulled a book that challenged politically correct views about gender, after the store dumped, then re-listed, another gender-related tome.

Dr. Debra Soh, the author of ‘The End of Gender: Debunking the Myths about Sex and Identity in Our Society’, revealed that Target had quietly removed her book from their website.

“Where did my book go?” she asked, including screengrabs showing that ‘The End of Gender’ had disappeared from the store’s online catalog.

Search engine results reveal that the volume was once listed on the retailer’s site, but the link no longer works. She tweeted her message at Target’s main account, as well as its customer service handle. The retailer has so far remained mum about the book’s disappearance, but that hasn’t stopped social media users from accusing the shopping chain of engaging in PC thought-policing.

One Twitter observer accused Target of modern-day book-burning, while another equally peeved commenter accused the retailer of enlisting in the “Woke Inquisition.”

Just the next casualty of the Woke Inquisition, won’t be the last.

Many others said that Target’s alleged censorship had prompted them to purchase Dr. Soh’s book from Amazon.

Just ordered it on Amazon, thanks for the reminder! I ordered Abigail’s last night, both physical book and digital. Never. Stop. Fighting. Order HERE: https://t.co/qGbFqVGw9W

Although it’s still unclear what led to the book’s removal, Target announced on Friday that it had pulled another book, ‘Irreversible Damage: The Transgender Craze Seducing Our Daughters,’ by Abigail Shrier, after a single, anonymous Twitter user complained to the store that it was “transphobic.” The move led to accusations of censorship, as well as calls to boycott the company.

However, hours later, the store made a U-turn after someone claiming to have “lived through gender dysphoria” said they recommended the book and called on Target to reconsider its decision.

In a tweet, the store said it would add Shrier’s book back to Target.com, explaining that it wanted to “offer a broad assortment for our guests.” Target also apologized for “any confusion” regarding its abrupt about-face.