Super Baby! Parents of preemie use Superman toy to chart their son’s journey 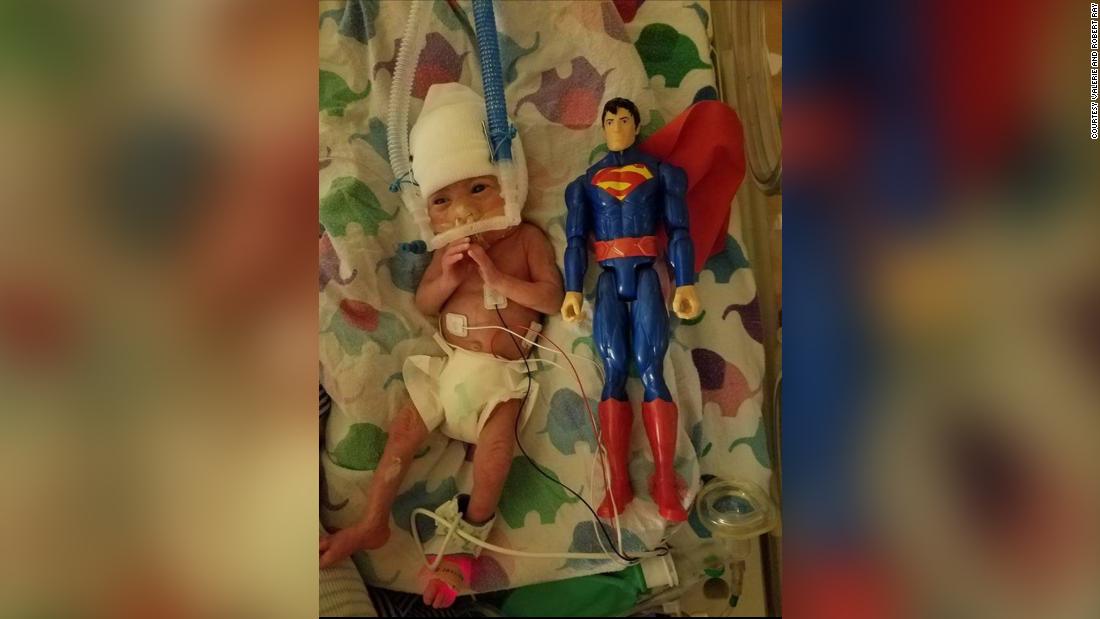 That has been Logan Ray’s life motto.

At 4 years old, he looks and acts like your average kid. He loves dinosaurs and “anything to do with water.” But what Logan might not realize yet is that he has a special connection to the Man of Steel.

Logan was born about 4 months premature when his mother, Valerie Ray, was 23 weeks and 5 days into her pregnancy.

With his birth stats, he was considered a “micro preemie.”

“It was all terrifying,” Valerie recalled of Logan’s birth. “But the fact that the doctor held him up and I could see his little stomach and attempting to get air, obviously he had to be put on the ventilator, but he was a good color.”

Logan’s father, Robert, however, credits his wife for the fact that Logan was born at all. When Valerie was in her 20th week of pregnancy, she began having a “gut feeling” that something was not right. They went to the hospital for an ultrasound and found that her “cervix was two millimeters and it’s supposed to be three centimeters.”

After an unsuccessful cervical stitch procedure, doctors prepared Valerie and Robert to expect a miscarriage, an outcome they said they did not want to accept.

“She was determined,” said Robert. “There was no way she was going to change her mind from trying to save him.”

Valerie immediately went on bed rest with her head positioned lower than her feet, and stayed that way for the next 20 days. Then, on July 25, 2016, Logan made his way into the world.

The journey, however, was far from over.

Logan would end up staying in the hospital for the next 105 days, in two separate neonatal intensive care units (NICUs). The process was hard on the family.

“I felt like I had failed him, and that was hard, but I think I quickly changed my attitude. I still to this day feel guilt honestly, but with him being in the NICU, I wanted to stay as positive as possible and I encouraged my husband as well.”

During Logan’s hospital stay, one of the nurses suggested they take a picture with Logan next to something in order to document how small he was and help measure his growth. Logan’s father went to the store and came back with a hero — Logan’s first Superman toy.

During the first few weeks, the Rays took weekly pictures charting Logan’s growth next to the toy and then switched to monthly photos for his first year. Now, it’s a birthday tradition.

“I don’t think he quite realizes that that’s how big he was.”

Logan’s family received an extra-special gift on his 4th birthday this year — a sister, Madison. She was born the same day as her brother, only slightly premature, arriving just shy of her 37th week in utero.

“I think there is a reason she was born on his birthday. Like God knew I needed a little extra help.”

“Blessed, thankful, amazed.” That’s how Valerie described the feelings she and her family have now.

It’s a feeling they would like to pay forward. They are currently looking into ways they can raise awareness and help families of premature babies.

“We didn’t know that NICU life could be as dramatic as it was, but when you’re in the moment, you just don’t realize what you’re going through,” said Robert.

Their goal is start to a non-profit that would help cover travel expenses for families with babies in NICUs. It’s a humanitarian act that would impress even Superman.

A vicious culture war is taking place via edit wars on Wikipedia in India, exploiting and aggravating religious tensions in the context of COVID-19 (Omer Benjakob/WIRED UK)