Subway Service Could Be Cut 40% if No Federal Aid Arrives 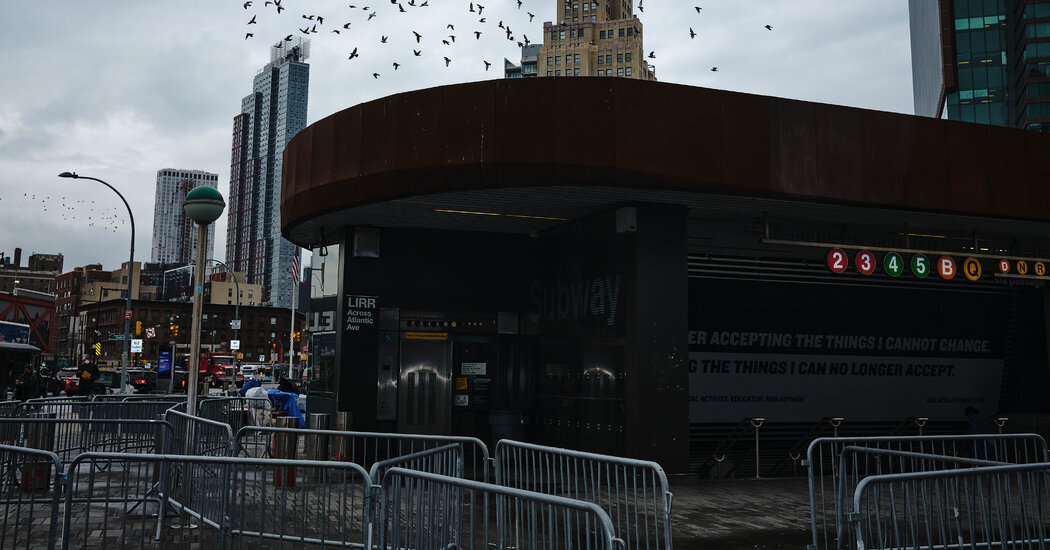 Subway service in New York City slashed by 40 percent. Bus routes eliminated and service on the rest cut by a third. Service on two of the country’s busiest commuter rails reduced by half.

This is the sober scenario the Metropolitan Transportation Authority laid out on Wednesday as the agency faces a deadline to balance its budget while grappling with an enormous multibillion-dollar financial hole caused by the pandemic and little prospect of any immediate relief from Washington.

Transit officials say their doomsday plan is a worst-case scenario made necessary because even with President-elect Joseph R. Biden Jr. assuming office in January, it is unclear if there will be a breakthrough in Congress on another stimulus package.

The M.T.A., the nation’s largest transit agency — which operates the subway, buses and two commuter rails — is seeking $12 billion in federal aid, an outcome that is far less likely if Republicans retain control of the Senate.

Without federal help and with the state and city facing their own financial emergencies, the agency said it would be forced to impose some version of its proposed cuts, a move that would damage the region’s lifeline and undermine New York’s recovery from the pandemic.

“New York was already going to have a difficult time,” said Nick Sifuentes, executive director of the Tri-State Transportation Campaign, an advocacy group. “But these cuts on transit are like doubling down on the difficulty level of New York getting back on its collective feet again. What might have taken a couple of years could now potentially take decades.”

In recent months, the M.T.A., which received $4 billion in an earlier federal stimulus bill, has painted increasingly grim pictures of the transit system’s future as part of a strategy to pressure Congress into providing more support.

But with a looming Dec. 31 deadline for passing next year’s budget, transit officials have been forced to provide some more details about what the sweeping cuts they first announced in August might include, alarming riders, union officials and elected leaders. The agency is expected to provide more specifics next month before adopting its 2021 budget.

On Wednesday, the agency said subway weekend service would be hit hardest by cuts, with 15-minute wait times between trains and some lines eliminated entirely. Service cuts for buses would affect up to a quarter of all bus routes — especially those with low ridership — though no bus riders would be more than half of a mile from another bus line or subway station.

And on the Long Island Rail Road and Metro North commuter rails, service could be reduced on some lines while others eliminated entirely on weekdays and weekends.

Transit officials also announced that they would slash 9,367 jobs from the transit work force, nearly half of which would come from the division that runs bus service. Union leaders warned that such a drastic step would provoke a fiery response from their members, including a work slowdown that would worsen service even before any official cuts were made.

“The New York City Transit work force will correctly view this as the greatest betrayal of their careers,” said John Samuelsen, the international president of the powerful Transit Workers Union. “There will be a rank-and-file rebellion, which will lead to chaos. It will lead to a disruption in service.”

“M.T.A. workers control production maintenance and on-time performance on buses and the subway,” he added. “They don’t need to strike to make their voices heard.”

Transit officials portrayed their proposal as a response to two bleak realities — the agency’s $16.4 billion deficit through 2024 and a ridership that has stalled at around 30 percent of pre-pandemic levels.

The latest analysis of M.T.A. finances and ridership by the consulting giant McKinsey & Company projects that even in the best-case scenario, ridership will not reach 80 percent of pre-pandemic levels before 2024.

“We’re going to have to match our service structure and service schedules to equal rider demand,” Robert Foran, the agency’s chief financial officer, said at the M.T.A. board meeting on Wednesday. “This is just ugly. This though is something we have to consider, you know, if we’re going to survive.”

With New York facing a new wave of virus cases and the widespread distribution of promising vaccines not expected to happen until well into next year, it is unclear how quickly ridership will start to rebound.

The economic fallout from hollowing out the transit system would also ripple across the region: By 2022, it could cost the New York area as many as 450,000 jobs and $50 billion in lost earnings, according to a report by the Rudin Center for Transportation at New York University and Appleseed, an economic analysis firm.

The plan also risks sending the system into a so-called death spiral, in which increasingly unreliable service keeps riders from returning to the system, exacerbating the agency’s financial crisis by depriving it of fare revenue.

And the timing of cuts — which transit officials say could come as early as May — would coincide with an already scheduled 4 percent fare increase that will take effect in the spring, which could make it more challenging to coax riders back to public transit as greater numbers of workers return to their jobs in person.

“If the M.T.A. has to make major service cuts it will kneecap itself, it will lose a significant amount of revenue,” said Danny Pearlstein, a spokesman for the Riders Alliance, an advocacy group. “If those cuts come with a fare hike it will drive even more people from transit, worsening the M.T.A.’s financial picture and hastening the transit death spiral.”

On Wednesday, the agency also moved forward with plans to borrow $2.9 billion from the Federal Reserve’s emergency program in an effort to stave off cuts and shore up the agency’s finances.

“We are fighting very, very hard to get mass transit funding into the next Covid relief bill. We know how vital it is for New York,” Senator Chuck Schumer, a New York Democrat and the minority leader, said in an interview on Wednesday. “Some in the Senate have resisted, but we have overcome that resistance in the past and I am hopeful we will overcome it again.”

Mr. Biden, who has been a regular commuter on Amtrak between his homes in Delaware and Washington, is considered a strong advocate of public transit. Major transit agencies across the country have been decimated as ridership collapsed during lockdowns.

The full scope of the M.T.A.’s plan to reduce costs is expected to emerge in a few weeks when the board, which is controlled by Gov. Andrew M. Cuomo, votes on a budget.

“Transit is the lifeblood of the city, the ease of getting to work and moving around helps the city’s dynamism and helps its growth. It makes it attractive,” said Andrew Rein, the president of the Citizens Budget Commission, a fiscal watchdog. “We need to see the details in order to determine whether the severity of these cuts will be so painful that they are a drag on the economy.”