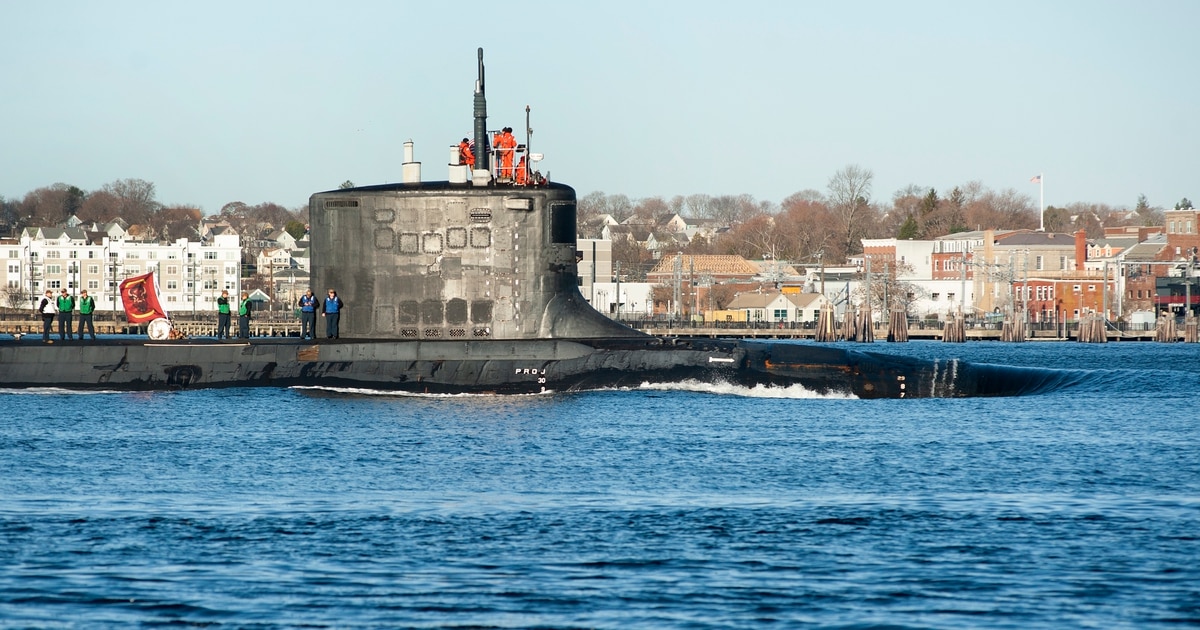 WASHINGTON – The Navy’s submarine force of the future will have to balance its need to remain stealthy against a need for information from the joint force.

Asked about the Defense Department’s Joint All Domain Command and Control effort, which would net together forces in all domains from all the services, Rear Adm. Jeffrey Jablon, the commander of submarine forces in the Pacific, said submarines need to be tapped into that network even though they usually prize their silence and ability to operate under the seas without interaction with higher headquarters.

“It’s very important that the submarine force be a part of this. This will provide joint [and] Navy commanders that situational awareness for mission success, that integration of tactical data link capabilities aboard submarines and at the theater undersea warfare commander headquarters. That’s a step in the right direction to integrate the joint force,” he said. Jablon was speaking at the Navy League’s annual Sea Air Space 2021, in a virtual event previewing the live conference next month.

Electronics Technician (Navigation) Seaman Tyler Mcmillen, from Erie, Pennsylvania, stands watch as helmsman aboard the Los Angeles-class fast-attack submarine USS Chicago (SSN 721) in support of Valiant Shield 2020 on Sept. 14, 2020. Valiant Shield is a U.S.-only, biennial field training exercise (FTX) with a focus on integration of joint training in a blue-water environment among U.S. forces. This training enables real-world proficiency in sustaining joint forces through detecting, locating, tracking, and engaging units at sea, in the air, on land, and in cyberspace in response to a range of mission areas. MC1 Derek Harkins/US Navy.

Rear Adm. William Houston, the director of undersea warfare on the chief of naval operations’ staff (OPNAV N97), said during the panel that the submarines need stealth as a matter of survival, but in major combat operations, they may also need information from the rest of the joint force to ensure their survival, too.

“When you talk about JADC2, a lot of times people are thinking of the submarine force potentially relaying information back to the joint force. In many cases, since we’re the inside force, it’s the rest of the force and the rest of the systems providing us information,” he said.

“We need to change the paradigm of thinking that the submarine force is there to communicate back information; in some cases, as being the killer inside the enemy’s lines, we’re going to need that information to go ahead and make best use so we can bring the rest of the team to bear. … When you look at the firepower we bring, it’s very, very powerful because we’re survivable. But in terms of total numbers of munitions, we cannot compare to the rest of the joint force, to the carrier strike group or one of those [cruiser/destroyer] platforms; we just don’t have the volume. The advantage we have is, due to our stealth, we have no need for a defensive-type weapon [against an] inbound missile type system. We’re all tooth; we are going after the enemy with our weapon systems. And so that’s really our advantage.”

Still, to be useful and effective in the harsh undersea environment, Houston said JADC2 would need to allow for communication at depth and speed and do so in a way that doesn’t give away a sub’s position.

The Virginia-class fast-attack submarine USS Illinois (SSN 786) departs Joint Base Pearl Harbor-Hickam for a scheduled deployment in the 7th Fleet area of responsibility on March 30, 2021. Illinois will perform a full spectrum of operations, including anti-submarine and anti-surface warfare, during the Indo-Pacific deployment. MC1 Michael B. Zingaro/US Navy.

Andrew Mara, the vice president and director of the systems, tactics, and force development division at the Center for Naval Analyses, said during the panelthat, as robust as JADC2 would be built to be, the submarine community’s history of operating alone under the seas would be a great failsafe in case the joint network were disrupted during combat.

“One of the things I think the submarine force brings that’s really interesting when you think about JADC2 is that it also provides a really great fallback capability,” he said. “I think our adversaries are going to look to disrupt our communications capabilities, and so while there’s a force-multiplier in linking people together, there’s also kind of a beautiful simplicity in having a force that, if something goes wrong in communications networks, has all the keys it needs to still be an effective fighting force. So I think beyond just linking them together and providing that kind of network value to the battle force, the fact that you have a really effective fallback mode is a really nice feature.”

The ability to design and field this robust network will also affect the submarine community’s ability to integrate unmanned vessels into their operations. Houston said the community is mostly focused on integrating small and medium unmanned underwater vessels with its attack subs – with the larger UUVs being controlled from ashore rather than from SSNs – and despite challenges with developing batteries for UUVs and communications systems that work underwater, he said SSNs and UUVs paired together will be very powerful in the future.

“Every submarine needs to be able to do seabed warfare, so in some cases we’ll use UUVs to deliver mines, for instance, clandestinely delivered mines. In some cases, we’ll use them for a comms relay. In some cases, we’ll use them as a sensor to go forward where we do not necessarily want to put the submarine until we’ve surveyed the area and made sure that we want to operate in that area. In some cases, we may use it to execute missions that a submarine, due to depth, may not be able to. So it’s really a force-multiplier. But we also have to go with a slow measured pace, and we’re not afraid to fail, but we need to do a little, learn a lot, and then do a little and learn a lot more. And so it’s a really measured approach for us. We don’t have time to get this wrong, and it’s just really a balancing act,” Houston said.

As much as UUVs will help extend the reach of the submarine force, what they really need is more submarines. The Navy has gone from 87 in 1991, when the Cold War ended, to a low of 50 this year. The force should ramp up to about 70 in the future, according to the Battle Force 2045 future fleet plan the Pentagon released last year.

Jablon said the submarine force faces a lot of pressure today, trying to both provide enough deployed forces for the combatant commanders while also increasing training to get ready for high-end warfare.

“A larger size force will enable us to, one, reduce the pressures on that small force that we have today for training, for maintenance, to allow us to focus on preparing for major combat operations, which is my role. So I remember when I came into the submarine force in the late 80s, we had a larger fast attack submarine force, we were able to conduct more training at sea because we had time before we were going to deploy. We had a lot more [commanding officers’] discretionary time for that training, because we had the ability to do that based on the size of the force. So the size of the force only adds goodness to my job to prepare the force for major combat operations and also gives the combatant commanders more flexibility and operational commanders more flexibility – just due to that away-game tyranny of distance, we’re able to put more submarines forward to react to any contingency that may happen. So we want to grow the force; it will only help at every operation and mission that we’re trying to achieve.”

The Seawolf-class fast-attack submarine USS Connecticut (SSN 22) departs Naval Base Kitsap-Bremerton for deployment, May 27, 2021. Connecticut will be conducting maritime operations in the U.S. 3rd and 7th Fleet areas of operations to maintain a safe and open Indo-Pacific, ready to defend our nation at a moment’s notice. Lt. Mack Jamieson/US Navy.

Mara warned, though, that while “more submarines is undeniably going to be a good thing for the Navy,” the service will also have to figure out how to create more maintenance capacity for a larger SSN fleet, ensure they have enough basing infrastructure, work closely with industry to ramp up capacity to build submarines and spare parts without breaking the backs of smaller companies, and more.

“We need to kind of think about that as an integrated system, because in the end, numbers of ships is a good metric, but there’s a lot of other pieces that lead to combat power, and making sure we’ve aligned all the parts, even maybe the less glamorous parts that people don’t think about, is really important.”