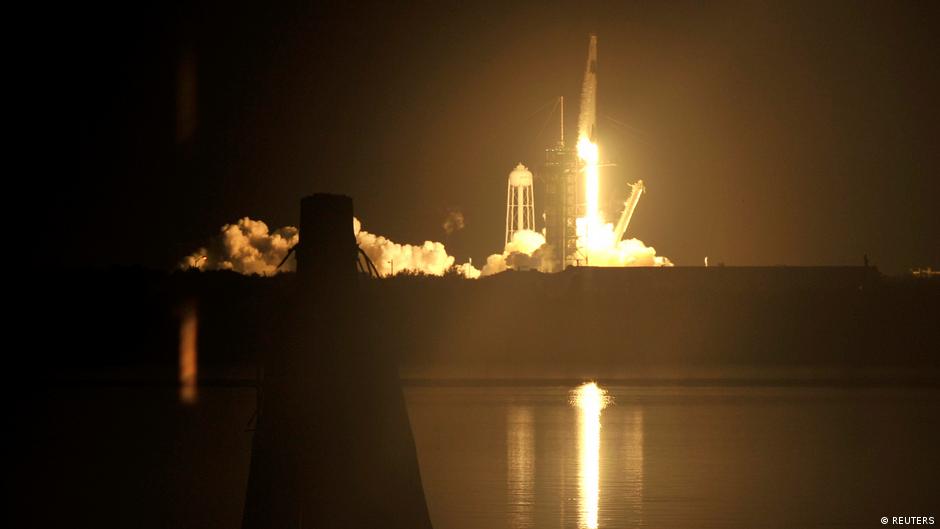 US aeronautics company SpaceX launched four astronauts to the International Space Station on Sunday on the first full-fledged taxi flight for NASA by a private company.

The Falcon 9 rocket took off from the Kennedy Space Center in Florida, carrying three Americans and one Japanese in what was the second crew to be launched by SpaceX.

The newly designed Crew Dragon capsule has been dubbed Resilience by the crew in light of this year’s many challenges, most notably the coronavirus pandemic.

The capsule is due to reach the space station late Monday and will remain there until spring. The 27-hour-long flight, door-to-door, will be fully automated but the crew can take control at any time.

The Resilience crew included commander Michael Hopkins, along with two other NASA astronauts, Victor Glover and Shannon Walker. They were joined by Soichi Noguchi who was making his third trip to space after previously flying on the US shuttle in 2005 and the Russian Soyuz in 2009.

US President-elect Joe Biden congratulated NASA and SpaceX on the launch, calling it a “testament to the power of science.”

Vice President Mike Pence, who attended the launch with his wife Karen, said the launch marked a “new era in human space exploration in America.”

SpaceX founder Elon Musk was unable the attend the launch after he tweeted that he “most likely” had a moderate case of COVID-19.

NASA policy at the Kennedy Space Center requires anyone testing positive to self-isolate. The spacy agency continued with its safety precautions put in place in May.

All astronauts went into quarantine along with their families in October. The launch personnel at Kennedy were required to wear face masks and the number of guests was limited.

In May this year, SpaceX completed a demonstration mission carrying two astronauts to the ISS and bringing them back safely.

NASA hopes that the launch marks the beginning of regular crew flights to the space station from American soil, ending nine years of reliance on Russia to send astronauts to space.

The US space agency can eventually stop buying seats on Russian Soyuz rockets. The last one cost $90 million ( €75.9 million).

But the US dependence on Russia won’t end altogether, according to NASA administrator Jim Bridenstine.

“We want to have an exchange of seats where American astronauts can fly on Russian Soyuz rockets and Russian cosmonauts can fly on commercial crew vehicles,” he said, explaining it was necessary in case either program was down for a period of time.

NASA ended its checkered Space Shuttle program in 2011 which failed to make space travel affordable and safe. In 2014, the space agency contracted SpaceX and Boeing to develop competing space capsules to wean the US dependence on Russian rockets.

While SpaceX made its second successful flight, the Boeing program hit a roadblock after a failed test of its uncrewed Starliner last year.

Stretching Loving Hands Of Hope To Motherland – Kristine Kumuryan, hopes to inspire love and action in Armenians around the world | Markets Insider

The Army is making tank upgrades as simple as switching…