South Dakota governor is asking for donations for Trump, but watchdog says the money will likely stay with her 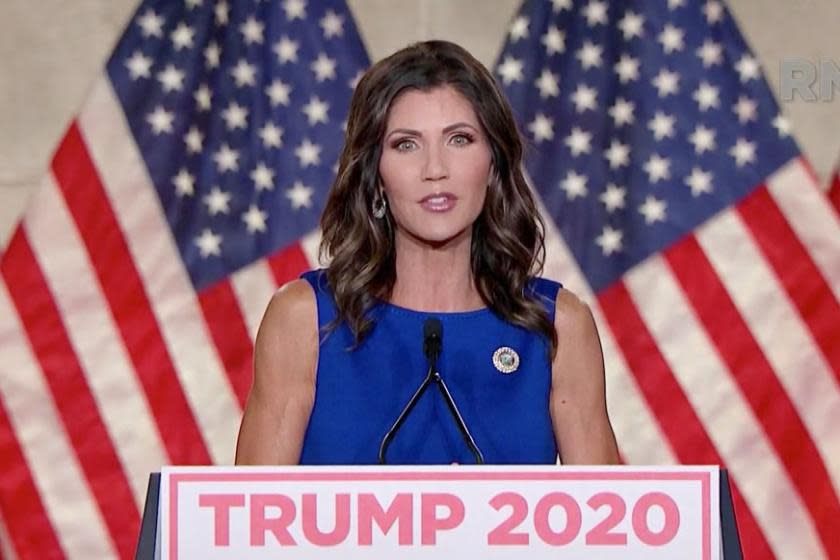 South Dakota Gov. Kristi Noem (R) was quick to launch a fundraising campaign over the weekend that asked supporters to “help us bring it home for the president,” but it looks like the donations will help her campaign rather than President Trump.

The Associated Press reports that the website asking for donations says “Kristi Noem for Governor” at the top of the page, along with a message saying Trump “needs our support while the far-left Dems declare a victory for Biden before all the votes are counted.” After agreeing to make a donation, contributors have the option of giving extra for processing fees, “so 100 percent of my donation goes to Kristi for Governor.”

Noem’s campaign committee chairman told AP he had no comment on how the money will be used. Paul S. Ryan, vice president of policy and litigation at the campaign finance watchdog Common Cause, said under federal law, the most Noem can give to the Trump campaign is $2,800, and “in all likelihood, she is keeping this money that she is raising.”

To really boost Trump, Noem could have directed donors to his own fundraising efforts. He has been sending out solicitations for money to cover his current legal battles, but the fine print shows half of the funds will go to paying off campaign debt. “He’s setting the example at the top of the party, at the top of the ticket,” Ryan told AP. “It doesn’t surprise me to see Noem doing something similar.”

More stories from theweek.com
GOP operative: Trump voters will turn on congressional Republicans if they publicly concede election
Does it matter if Donald Trump never concedes?
Emily Harrington makes history with her free-climb up El Capitan

How to Watch Today’s Apple Event (It’s About Laptops)