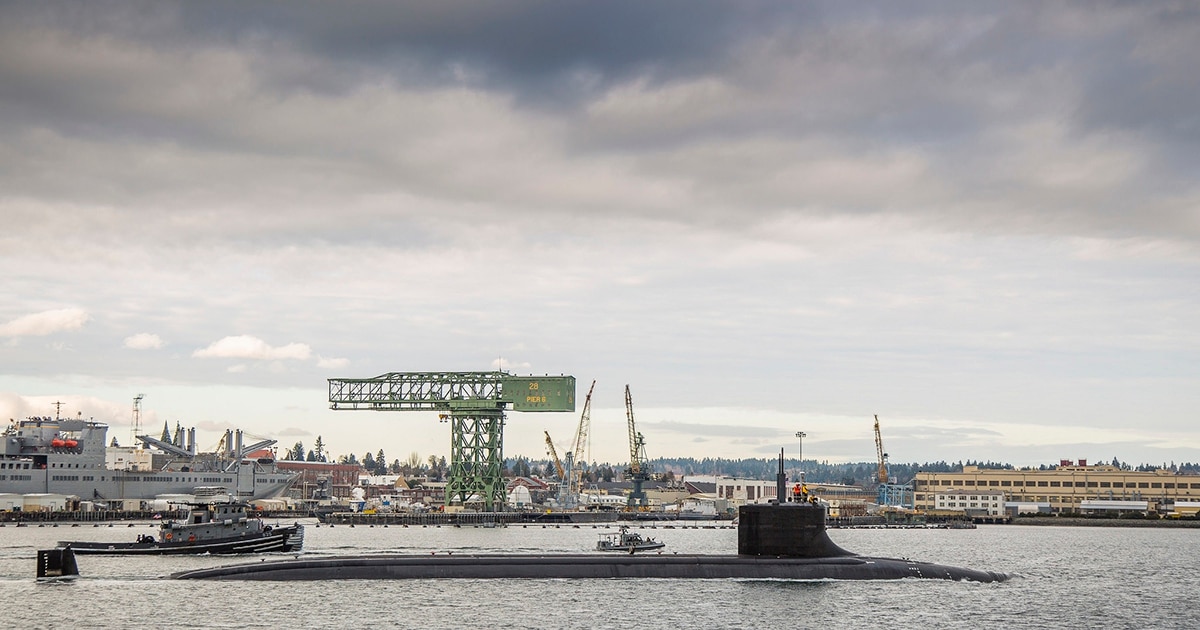 “If we do nothing else, the Navy must begin building three Virginia-class submarines a year as soon as possible.”

That was the pronouncement of Defense Secretary Mark Esper in September when the Pentagon chief rolled out the basics of Battle Force 2045, a beefed-up naval fleet with fewer large surface ships, more submarines, and more unmanned surface and subsurface vessels.

He has reason to want to jump-start sub building. With the retirement of the Los Angeles-class attack submarines over the coming years, the Navy expects to drop from 52 to 42 attack boats by the late 2020s, which has led to calls to increase attack submarine building to as many as three per year. All of this is in the name of keeping up with a rapidly expanding Chinese Navy.

But the companies that build the submarines — General Dynamics and Huntington Ingalls Industries — as well as the multitude of smaller businesses that supply niche, highly specified parts to assemble nuclear reactors or missile launch tubes, have every reason to ignore Esper’s latest grand designs.

Industry well remembers the 1990s when costs drove the Navy to slash the Seawolf-class sub order from 29 hulls to just three, with no immediate replacement vessel ready to keep the lines hot.

Seawolf was ultimately replaced with the cheaper but capable Virginia class, but the break in production hit the submarine industrial base hard. It drove parts suppliers out of business and forced skilled workers into other fields — skills that can take years to recoup through training a new workforce.

With those memories in mind, Esper’s plan seems unlikely to persuade companies to expand their production capacity. This especially applies when the Navy seems unable to stick to a shipbuilding plan for more than a single budget cycle.

And while Esper has put forward ideas for increasing Navy funding, those aren’t fully fleshed out beyond vague ideas about savings and new money from elsewhere in the Pentagon budget. No matter who takes the reins at the department after Esper, the next defense secretary will face the same problem set: How to meet a rising Chinese naval threat on a flat budget.

Three Virginia-class submarines per year (with the Block V costing $3.5 billion per hull, according to Navy leaders) and a $7.5 billion Columbia-class submarine every year starting in 2026 would mean $18 billion in submarines each year in today’s dollars, representing roughly 85 percent of the 2021 shipbuilding budget request.

For context, the Navy requested just north of $21 billion for shipbuilding in 2021, meaning that roughly 85 percent of the Navy’s shipbuilding budget request from this year would be consumed by submarines.

Few, if any, analysts believe this would be a sustainable shipbuilding budget going forward, given the Navy also needs to buy surface combatants, amphibious ships and of course a revitalized logistics system vital for sustaining any potential maritime conflict with a rival great power.

At the same time, few analysts are predicting a large boost to defense spending, with most predicting essentially flat budgets with inflation.

In the short term, Pentagon leaders will face a choice: Do they want to cut funding from another service, such as the Army, to build more ships? Or do they need to grow the force within the current budget?

This was the idea behind the recent Hudson Institute analysis that called for more than 500 ships, heavily weighted toward unmanned and lightly manned platforms and maintaining a steady number of submarines. This scenario increases the offensive punch and sensor distribution of the fleet but limits the cost growth associated with large, expensive platforms that require big crews and lots of maintenance. In short, a bigger fleet with more reach but a relatively steady operations and sustainment budget.

It is likely not the only way to achieve the Navy’s goals. But too many plans can be boiled down to spending a lot of money on ships, worrying about how to crew and operate them later.

In the coming months, defense planners at the Pentagon and on Capitol Hill should converge on what kind of Navy they want and devise a plan to get there. Because until there is a steady, reasonable and workable plan, industry seems unlikely to invest in expansions to meet the latest here-today, gone-tomorrow shipbuilding plan.

A Plan to Save Appalachia’s Wild Ginseng