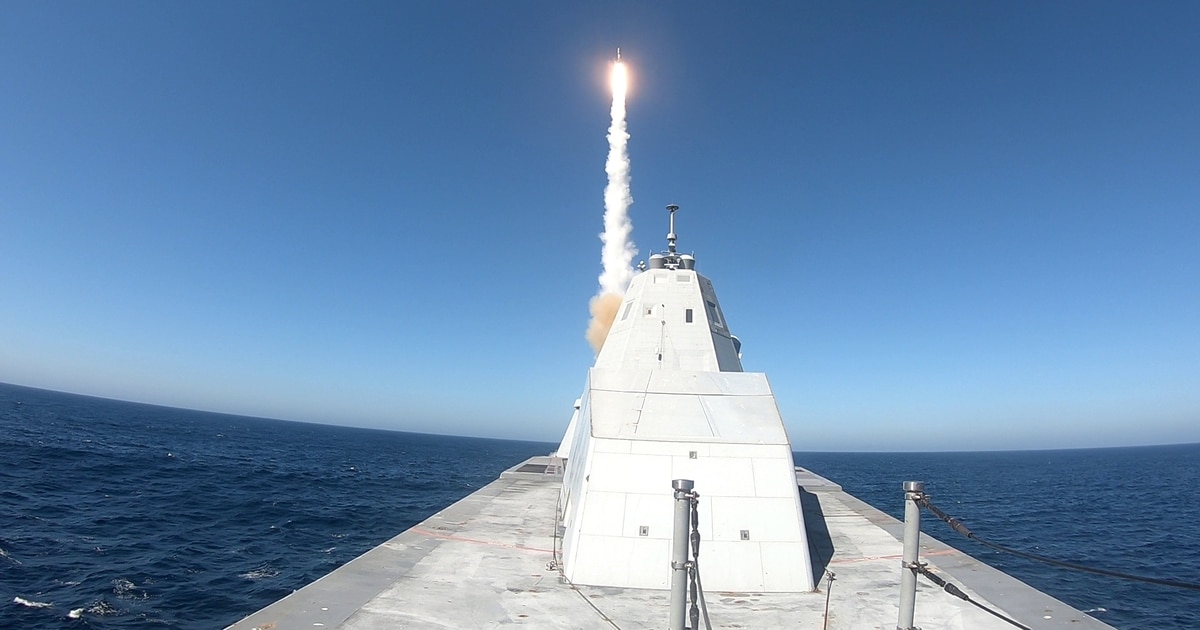 WASHINGTON — The U.S. Navy’s first stealth destroyer, Zumwalt, test-fired an SM-2 missile out of its MK 57 Vertical Launching System on Oct. 13, the service announced Monday afternoon, demonstrating that the launcher is operable.

The test, which took place on the Naval Air Weapons Center Weapons Division Sea Test Range, near Point Mugu, California, was a first for the hull. Zumwalt was delivered to the fleet earlier this year, almost four years after commissioning the ship without a fully installed combat system.

“Today’s successful test not only demonstrates the ship’s capability to fire missiles and conduct self-defense, it is also a significant step toward more advanced combat system testing and operations for our Navy’s most technically innovative warship,” DDG 1000 program manager Capt. Matt Schroeder said in a Navy release.

The MK 57 VLS can accommodate larger missiles than that MK 41 VLS, and Congress has been pushing the fleet to use the former for hypersonic missile strikes.

The ship is now part of the Surface Development Squadron, which is tasked with integrating future technologies such as the Zumwalt-class destroyer and unmanned surface vessels.

In 2018, the Navy requested nearly $90 million to integrate SM-6, Raytheon’s long-range anti-air missile, which has a surface mode. The service intends to put the Maritime Strike Tomahawk weapon onboard as part of a mission change to make Zumwalt a ship-killing platform.

The future for the ship remains uncertain, however, as it hasn’t found a use for the Advanced Gun System. In late 2016, the service canceled its Long Range Land Attack Projectile, which cost about $1 million per round, and has struggled to come up with a replacement round for the gun.

In April 2019 testimony, the Navy’s then-top requirements officer, Vice Adm. William Merz, told Congress that the slow development of the Advanced Gun System was holding back the Zumwalt.

“Even at the high cost, we still weren’t really getting what we had asked for,” he said. “So what we’ve elected to do is to separate the gun effort from the ship effort because we really got to the point where now we’re holding up the ship.”

The Navy has touted the ship’s excess space, weight, power and cooling capability as advantages the service would want throughout the ship’s life. Everything from directed energy and electromagnetic rail guns to electronic warfare equipment has been floated as add-ons to the Zumwalt-class destroyers.

The Navy got in its present pickle with the 155mm, .62-caliber gun with an automated magazine and handling system because the service cut the buy from 28 ships to seven, and then again to three.

The Advanced Gun System was developed specifically for the Zumwalt class, as was the Long Range Land Attack Projectile round it was intended to shoot. There was no backup plan, so when the buy went from 28 to three, the costs remained static, driving the price of the rounds through the roof.

In the Monday news release, the Navy’s Program Executive Office Ships said the Zumwalt’s “stealth and ability to operate in both the open-ocean and near-shore environments creates a new level of battlespace complexity for potential adversaries.”

“The Zumwalt class will also operate as a key enabler in the acceleration of new warfighting capabilities and rapid development and validation of operational tactics, techniques, and procedures,” the statement read.

Neutron Stars Create Gold and Platinum in Their Wake