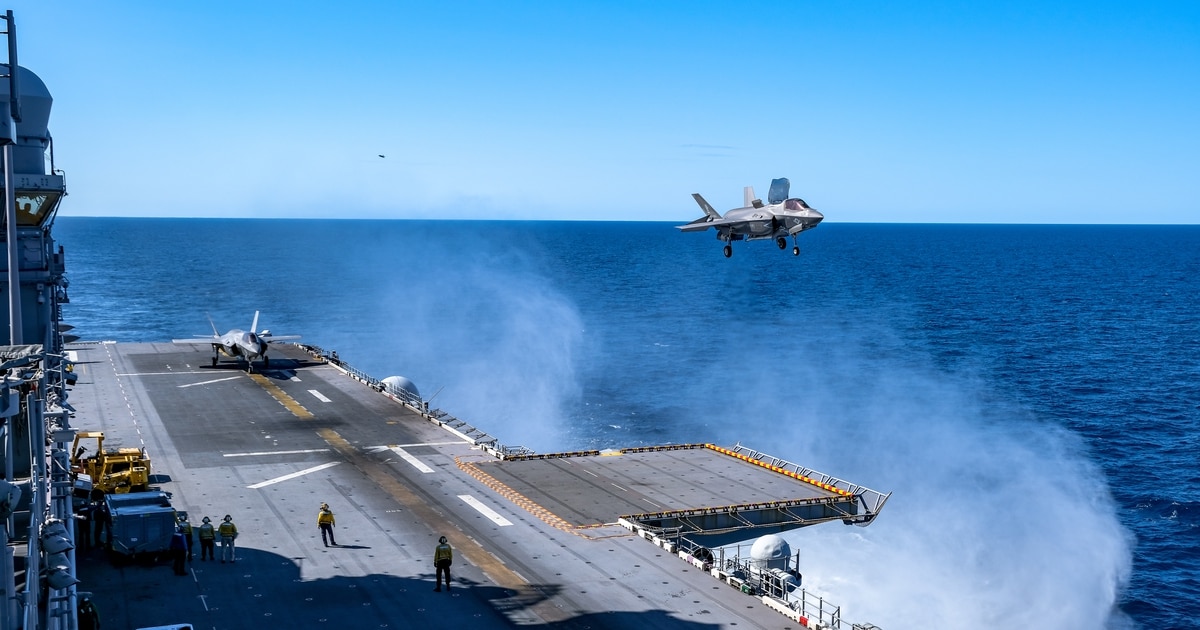 MELBOURNE, Australia — U.S. Marine Corps F-35B jets are carrying out high-end integrated air warfare training with Australian counterparts in the skies above the country and the Coral Sea, as both nations hold a massive multidomain exercise.

The F-35Bs have not previously participated in the exercise Talisman Sabre, which is held once every two years. This year’s exercise saw Canada, Japan and South Korea each send a ship to participate, while Japan and the United Kingdom each sent a small contingent of ground troops, joining forces from Australia, New Zealand and the United States.

Defense News took part in a virtual media roundtable with senior U.S. Navy and Marine Corps leaders taking part in the exercise onboard the helicopter assault ship America on Wednesday, during which they provided details on the drills.

According to Rear Adm. Chris Engdahl, who commands the U.S. Navy’s Expeditionary Strike Group 7, the ability of the F-35B to integrate with the Royal Australian Air Force F-35A and other assets, such as Boeing E-7A Wedgetail airborne early warning and control aircraft, during high-end air combat training “has just been spectacular.”

Echoing those sentiments, the commander of the 31st Marine Expeditionary Unit, Col. Michael Nakonieczny, called the F-35Bs “fantastic and versatile,” although the commanders declined to go into specifics about what missions the F-35Bs undertook or if they trained for expeditionary advanced base operations. Engdahl would only say on the topic that the Marines will exercise “every capability the Marine Corps team has” at Talisman Sabre.

Expeditionary advanced base operations allow forces to operate from advanced austere bases, and is one of the key concepts to the Corps’ plan to operate in a distributed manner across vast distances — an important requirement in the Indo-Pacific region.

Australia has a number of “bare bases” in the north — a vast territory hosting bunkers and aircraft shelters with the ability to support aircraft operations at short notice. Those structures are normally manned by a handful of caretakers, with one of these, RAAF Base Scherger near Weipa, activated for the exercise for the forward deployment of Australian aircraft.

The naval ship America also did not previously participate in Talisman Sabre drills, with prior versions involving Wasp-class landing helicopter docks as the so-called big deck supporting the amphibious phase of the exercise.

The America arrived in Japan in 2019, replacing the amphibious assault ship Wasp as the forward-deployed big deck in the Indo-Pacific region. The America class differs from the Wasp class in that the former has no well dock for the berthing and operations of landing craft, and instead has expanded aviation facilities to support a larger number of aircraft.

The commodore of Amphibious Squadron 11, Capt. Greg Baker, told reporters at the roundtable that the lack of a well dock onboard the America was “a blessing and a curse,” adding that the ship’s capabilities provided an opportunity to learn how to operate with lower surface lift capacity but increased air capacity.

“We can do so much more: more dynamic lift, more movement and envelopment with this platform,” Engdahl said, with the ability of the helicopters and tilt rotors onboard to deliver Marines farther and faster.