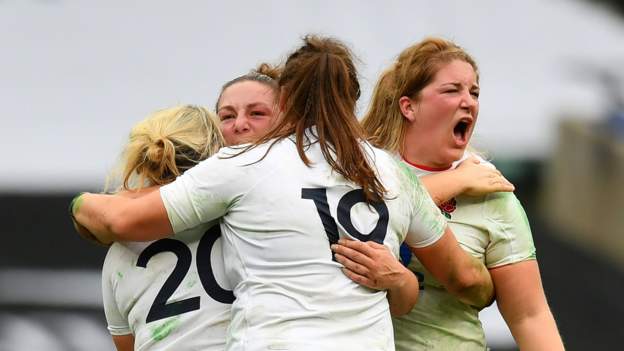 Emily Scarratt’s penalty gave England victory over France with the last kick of the game in a breathless encounter at Twickenham.

The Red Roses, who beat their World Cup pool opponents last week, trailed by one point as the clock went red.

A ferocious France dominated the first 60 minutes, until England emptied their bench and World Player of the Year Scarratt took to the field.

England had claimed a comfortable win against France in Grenoble, leading to questions over whether they needed tougher opponents in preparation for the 2021 World Cup.

But a different French side turned up at Twickenham and until the final 10 minutes it looked as if they would win in England for the first time since 2015.

After the break, Lark Davies and Cleall scored in mauls either side of a second try for Banet to bring England to within eight points.

Then Kildunne somehow found a way through a tangle of French defenders to cross, before star player Scarratt further cemented her place in England’s history books with the late kick.

The match, hastily scheduled when England’s tour of Australia and New Zealand fell through because of the coronavirus pandemic, took on extra significance when the two sides were drawn in the same World Cup pool on Thursday.

Back-to-back Six Nations Grand Slam champions England reached the top of the world rankings with last weekend’s win and this time around Simon Middleton fielded an experimental starting XV with next year’s showpiece event in mind.

During the week, some questioned whether France’s reputation as the Red Roses’ closest rivals was slipping.

But from the outset, Les Bleues looked ferociously motivated to dispel that talk. They immediately overpowered England in a scrum inside the French 22, took the ball to the other end and earned a penalty within five metres of the try-line.

Fly-half Drouin opted to kick at the posts but her effort swung left. The visitors ramped up the pressure again and when Drouin was given another opportunity for three points as England came in at the side of a maul, she made no mistake.

Uncharacteristic errors from a normally clinical England meant they gave away possession twice in France’s 22 but the Red Roses were then sent a gift from the Twickenham turf.

Scrum-half Leanne Riley’s wayward pass missed Katy Daley-Mclean but bounced perfectly for centre Harrison, who picked up the ball and scored in the right corner.

Still France continued to dominate and they took the lead once more as a quick switch of direction caught England off guard, giving Gros plenty of room to go over.

France then had the final word of the first half in emphatic fashion as Shannon Izar found some space on the counter-attack.

The full-back covered 30 metres and passed to Banet, who beat much-praised England full-back Kildunne in a one-on-one to score and give her side their 10-point lead at half-time.

Banet’s glory was short-lived as she was given a yellow card almost immediately after the break for kicking England forward Cleall in a ruck.

As the Red Roses finally found some of their usual clinical edge at the set-piece, a maul cruised forward from the line-out and Davies had her hands on the ball as England went over.

France continued to build a score with another three points from Drouin’s boot and England could not respond until Middleton completely emptied his bench on the hour.

At first the reinforcements, including experienced scrum-half Natasha Hunt and flanker Marlie Packer, could not halt France’s momentum.

Les Bleues built through phases in England’s 22 once again and Banet darted over in the right corner, but then the Red Roses’ never-say-die attitude kicked in.

First came Cleall’s score, a carbon copy of the earlier try by Davies, then Kildunne somehow stayed standing as a crowd of French defenders tried to bring her down to claim another five points.

When the hosts earned a penalty, France’s fate seemed sealed as Scarratt stepped up. The centre was as reliable as ever, giving England their seventh successive win against France and a 37th victory in their past 40 Tests.

Player of the match: Ellie Kildunne

‘The bench were fantastic’ – what they said

England fly-half Katy Daley-Mclean, captain for the match, said on BBC Two: “The bench did a fantastic job, but you have to credit France. We have had some battles with those girls but lucky for us we have come out on top. That was a hell of a performance from them, but I am really proud of our girls.”

Injured England captain Sarah Hunter on BBC Two: “We want to be winning our games when we play France, especially going ahead to the World Cup with them in our pool we want a slight edge.

“We still have to face them in the Six Nations, and we know anything will come when we get to the World Cup.”

England are number one in the world, but we have seen it before where anything can happen in the World Cup.

But England definitely have the confidence, and they should be going into the Six Nations and the World Cup full of positivity.

A year in, Stadia's free-to-play and added phone support are great, but it needs a successful Cyberpunk 2077 launch to be seen as a true console alternative (Nick Statt/The Verge)