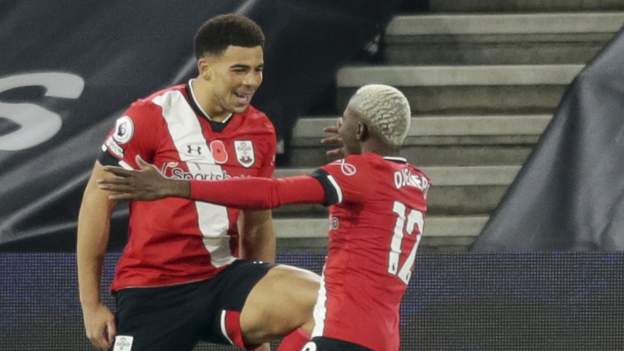 Southampton manager Ralph Hasenhuttl told his side to believe “anything is possible” after they went top of the Premier League for the first time ever.

Just over a year on from a 9-0 home humiliation by Leicester, which left the Austrian in danger of being sacked, he guided Saints to the summit of the English top flight for the first time since 1988 with a comfortable victory over Newcastle.

“Our fans will love it and they’ll make a picture of the table,” Hasenhuttl said.

“For us it’s nice but it shouldn’t kill the hunger for more. We should stay hungry and we should feel anything is possible with this team.

“We had some good results in the past two or three months and it was important everyone can see the philosophy we are following can be successful.

“Everyone was on the highest level and it’s a little bit scary what we’re doing at the moment. But it’s not surprising because I see them working.”

It was a dominant performance for Hasenhuttl’s side, who moved the ball well and deservedly ran out winners after Che Adams’ superb first-half volley and Stuart Armstrong’s drilled effort late on.

Newcastle, who remain 11th in the table, were the exact opposite and contributed to their defeat by carelessly losing the ball in dangerous positions for both goals.

“The goals we gave away probably summed up our evening,” said Magpies manager Steve Bruce.

“We gave it away far too cheaply and far too often. We were a shadow of the team I saw against Everton.”

No Ings, no problem

With top scorer Danny Ings injured Saints fans could have been forgiven for wondering just where their goals were going to come from.

Ings, whose impressive early-season form led to an England recall five years after his last cap, had been responsible for 36% of Southampton’s goals prior to this fixture after forming an effective partnership with Adams.

So, in his absence it was hardly a surprise to see Adams assume more responsibility, with Theo Walcott – back at his first club on loan from Everton after 15 years away – cast in a supporting central role.

Only an excellent save from Newcastle goalkeeper Karl Darlow prevented Adams from scoring with a curling effort towards the top right corner.

But moments later he opened the scoring with a wonderful volley from 12 yards after good work from Kyle Walker-Peters and Walcott.

With Oriol Romeu and James Ward-Prowse controlling the tempo and popping passes around and through the visitors, Saints eventually got a merited second goal.

Longstaff’s dawdling saw Armstrong deprive him of the ball and cut inside before dispatching a left-foot shot into the bottom left corner.

It was no more than Saints – who saw Darlow tip a sparkling Romeu effort onto the crossbar – deserved and it underlined a remarkable turnaround in their fortunes from 12 months ago.

Languishing in the bottom three and still reeling from that loss to Leicester, Hasenhuttl and Southampton appeared to be in turmoil.

Now they are top of the pile and the Austrian is being linked with the Manchester United manager’s role currently occupied by Ole Gunnar Solskjaer.

Newcastle’s profligacy in possession costs them

So Magpies boss Bruce’s frustration in the technical area was evident as his team appeared to dispense with a formula that worked so well against Wolves and Everton.

Not only did Newcastle fail to play the percentages in defence, they constantly lost possession cheaply as they over-played.

“You have to be good with the ball and make sure you look after it better than we did,” Bruce added.

“That’s why the players play at this level because they are expected to. From six minutes in we gifted them the first goal, then it was a difficult night all round.

“We were nowhere near where we were five days ago. That’s my biggest issue – that we go up and down. It was a poor, poor performance.”

Only two Newcastle players managed a passing accuracy of over 80% and that ensured they were unable to construct any sort of foundation to attack.

Almiron and Longstaff will bear the brunt of Bruce’s anger over the goals but Jamal Lewis, Federico Fernandez and Jacob Murphy also put their side into difficulty on several occasions.

Not even a tweak in style to be more direct with the introduction of Andy Carroll and Joelinton could rouse Newcastle, who won on the same ground in March.

Saints on the march – the stats

Following the international break both sides return to action in the Premier League on Saturday 21 November.