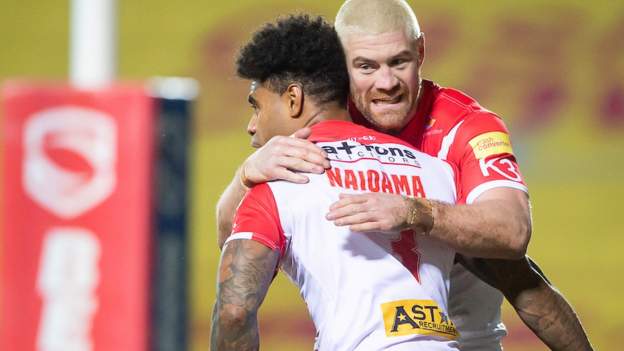 Saints lost James Graham before the break to a head injury, but led 14-2 with Lachlan Coote and Naiqama tries.

For Saints, it was a stylish way to reach a record 12th Grand Final.

Catalans, who were without the suspended duo of Michael McIlorum and Joel Tomkins, again put in an ill-disciplined performance with the sin-binning of James Maloney and Ben Garcia either side of the break being heavily punished by the champions.

It is the third time that the French club have fallen at the penultimate stage of the Super League play-offs, having been beaten in the last four by Saints in 2014 and going out to Leeds in the 2009 qualifying final.

On both occasions the side that overcame the Dragons went on to win the title, with Saints doing so against Wigan.

Catalans, just as Hull FC did 24 hours earlier against Wigan, started with plenty of promise and took an early lead with a penalty from Maloney.

A high tackle from the Dragons half-back on Grace minutes later saw him sin-binned and the Saints took immediate advantage with some crafty work from James Roby near the line sending Coote over for the game’s first try.

Coote converted and added a penalty to extend the lead before Graham took a stray elbow to the head from team-mate Jack Welsby to end his night.

For the soon-to-retire former England and Great Britain prop Graham, it made for an abrupt end to his final home game for Saints. He now faces rigorous tests to check if he has the chance to end his career in triumphant fashion in the decider.

McCarthy-Scarsbrook was also floored by a devastating hit from Michael Simon on the half-hour mark and while he initially looked unlikely to return, he was cleared to play on after the break.

Despite losing the dynamic pair in the first half, Saints built on their lead before the interval, with Naiqama finishing a fine flowing move down the right edge.

It took three inventive kicks from Saints to get Naiqama over again, with Leon Fages’ high ball poked forward by Coote and helped on my Tommy Makinson for the centre to eventually pounce on.

Quick hands from Zeb Taia, bumping a pass inside for Coote after a short ball from Fages, ensured the veteran second row made a stunning contribution in his final home game.

Lomax was next to go over and was soon after hit high by Garcia, earning the forward a yellow card in a game that went from tense to tempestuous.

Naiqama raced away for a near-length-of-the-field try after intercepting a pass from Maloney to complete his hat-trick in between tries from Bentley and Grace.

While brilliant, the victory comes with some concern as Graham will be monitored after failing a head injury assessment and Alex Walmsley limped out of the game with a knee injury.