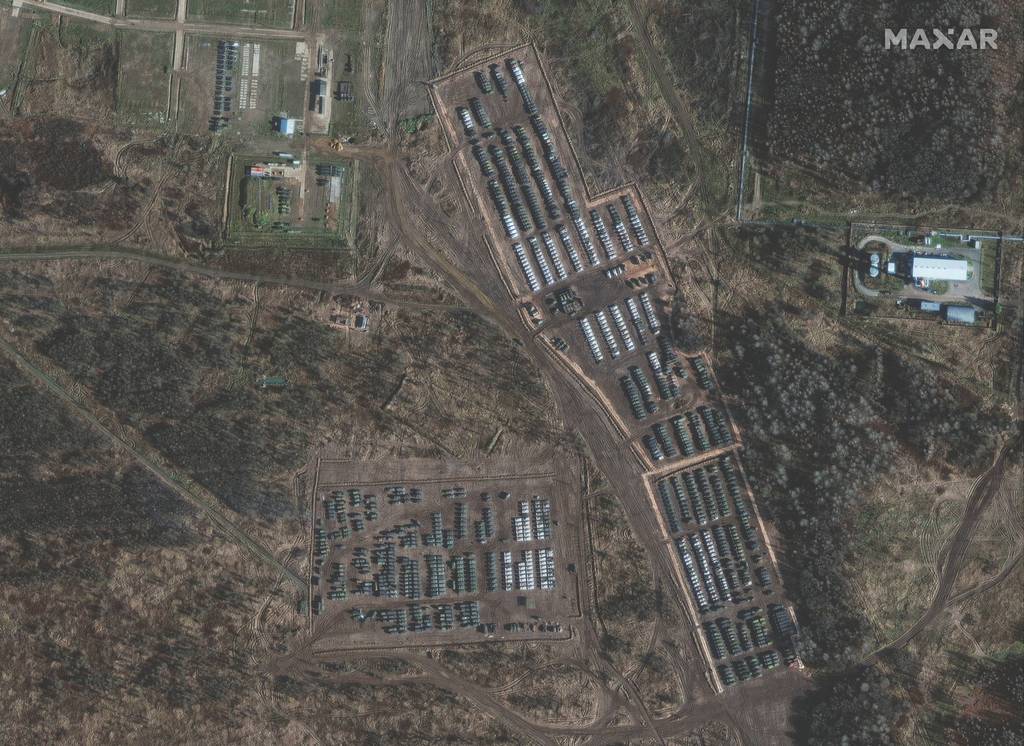 Ukrainian officials told Military Times that the gathering of Russian forces, tanks and short-range ballistic missile systems near the two countries’ border could offer the Russians an easy way to escalate an ongoing conflict.

During the second half of 2021, Russian forces “conducted a set of large-scale command and staff exercises nearby the Ukrainian border,” Mashovets said. But after the completion of the exercises, “units and subunits that participated in them remain in the European part of Russia, about [160 miles] from the state border with Ukraine.”

Of concern, Mashovets said, is that after exercises ended, only personnel returned to their permanent bases. However, combat and other military materiel like tanks, combat vehicles and “Iskander” short-range ballistic missile systems have remained near the Ukrainian border.

“It allows Russian authorities in very short terms to redeploy personnel and to form combat striking groups ready for offensive actions on the territory of Ukraine,” said Mashovets. “Thus, if Russia plans to extend aggression, additional redeployment of Russian “subunits to the border of Ukraine will be conducted.”

The equipment is visible in a series of satellite photos released this month from Maxar.

During a Wednesday afternoon press conference, Pentagon spokesman John Kirby described the Russian troop massing “as unusual in size and scope” but declined to expand on that assessment.

“We continue to see is unusual military activity inside Russia, but near Ukraine’s borders, and we remain concerned about that,” Kirby said. “And it’s not exactly clear what the Russian intentions are. We obviously would like to better understand that. And we don’t want to see any action further destabilize what is already a very tense part of the world. And we urge Russia to be clear about their intentions and to abide by their Minsk agreements.”

“As you heard, [Defense] Secretary [Lloyd] Austin say many times when we were in Europe just a couple of weeks ago, our support for the territorial integrity and sovereignty of Ukraine is unwavering,” Kirby said.

The Russian embassy did not immediately return a request for comment.

The gathering of Russian forces near Ukraine, and its continued occupation of Crimea, is more than just a concern for Ukraine, said Mashovets, the Ukrainian president’s deputy.

“We see that the Russian Federation does not just show military aggression, but wages a full-scale hybrid war against Ukraine and the whole Western society,” said Mashovets. “It should be understood that by its actions and armed aggression, Russia daily undermines foundations of a democratic world, and Ukraine now not only has a military conflict with the Russian Federation over its territories, but actually acts as a great wall to protect the entire civilized world from the Russian aggression. This seemingly ‘small problem’ in the center of Europe cannot be ignored.”

All told, about 114,000 Russian troops are near the Ukrainian border and on the occupied territories of Donetsk, Luhansk and Crimea, Mashovets said.

“Currently, 36 battalion tactical groups are in constant readiness nearby our borders, 31 of which are deployed on a permanent basis. And this has never ceased to concern Ukraine, because in fact our country is in a state of permanent escalation from the Russian Federation side.”

Each Russian BTG consists of about 300-500 troops, according to a Ukraine military official.

Ukraine, Mashovets said, is especially concerned about Russian forces preparing Crimea “for deployment of their nuclear weapons. Relying on Crimea, Russia carries out military operation in the Middle East and Africa, and affects the Balkans.”

In addition, there is also concern about the security of Russia’s border with Belarus, Mashovets said.

Russian forces “have already practically transformed Belarus in its internal military district,” he said. “Russia increases its military contingent on the territory of Belarus under pretext of combined exercises, performs assessments of preserved Belarusian military garrisons for possible deployment Russian subunits there.”

Meanwhile, integration of military components of Russia and Belarus continues, he said.

“Thus, after the active phase of “Zapad-2021″ exercise, part of Russian materiel was left on the territory of Belarus and nearby the borders of Ukraine, that allows to create striking troops grouping quickly and covertly,” Mashovets said.

As to what the Russian troop movements mean for Ukraine, Mashovets said they are nearing the “strategic encirclement of the territory of Ukraine.”

“Despite the sanctions and great concern of Western countries, the Russian Federation has almost realized its intentions regarding the strategic encirclement of the territory of Ukraine, including from the territory of Belarus, and continues to prepare the offensive actions on the Ukrainian territory,” he said.

Recent Russian military exercises were aimed at practicing for an attack inside Ukraine, he added.

In the Donbas, where Ukraine and Russian forces are trading fire, there are about 35,000 Russian troops, Mashovets said. They include top Russian officers.

“Cadre Russian generals and officers occupy key command positions,” he said. “It is a common and systematic issue to have a ‘combat’ practice on the line of disengagement with the temporary occupied territories of Ukraine by special units of …the Russian Federation, especially by sniper groups.”

Recently, he said, “Russian troops and their mercenaries have increased number of firings, which cannot but concern and outrage us.”

Each day, there are about five to 10 cease fire violations, he said.

In addition, Ukraine has also deployed drones it purchased from Turkey, said Mashovets.

The Bayraktar TB2 UAVs have been on combat duty in the area since spring 2021, Mashovets said.

“UAVs showed their effectiveness not only for intelligence,” he said. On Oct. 26, the Bayraktar TB2 drones were used against a Russian battery.

“As it was expected, such operation received geopolitical resonance,” he said.

Ukrainian intelligence reported that “among the occupation troops of Russia, and first of all among those who concentrated on the line of contact,” there was “increasing demoralization due to understanding of vulnerability from Ukrainian UAVs,” said Mashovets. “Combatants of occupation troops attempt to avoid duty on the frontline.

“I suppose that this case best demonstrates our readiness to defend the lands of Ukraine, because the truth is on our side,” he said. “We do not strive to seize other nation’s territories, we justly defend our borders and are ready to do so in the future. Our warriors are constantly training and getting better every day, as NATO partners have repeatedly confirmed during joint exercises.”

Howard Altman is an award-winning editor and reporter who was previously the military reporter for the Tampa Bay Times and before that the Tampa Tribune, where he covered USCENTCOM, USSOCOM and SOF writ large among many other topics.

Ethiopia’s leader said he would bury his enemy. His spokeswoman doesn’t think it was incitement to violence