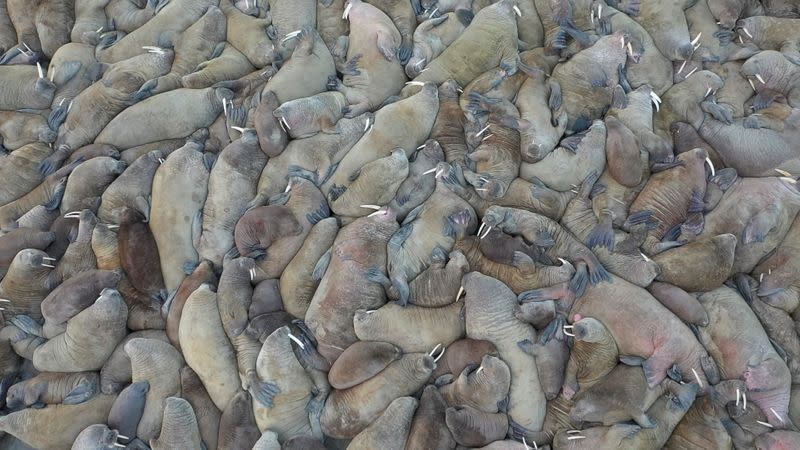 MOSCOW (Reuters) – Scientists in northern Russia have discovered a huge walrus haulout on the shores of the Kara Sea where their habitat is under threat from shrinking ice and human activity.

The haulout, a place of refuge where walruses congregate, reproduce, and socialise, is located in a remote corner of Russia’s Yamal peninsula, and scientists say they counted over 3,000 animals there last month.

Walrus haulouts have traditionally been located on drifting sea ice or on Arctic islands, scientists say. But warmer climate cycles mean sea ice is shrinking and habitats are under threat from oil and gas exploration and more Arctic shipping.

“This haulout is unique because there are both female and male walruses, as well as calves of different age,” said Aleksander Sokolov, a senior Arctic researcher at Russia’s Academy of Sciences who called the find a “unique open-air laboratory”.

The International Union for Conservation of Nature (IUCN) listed the species as “nearly threatened” in 2016, estimating the total number of adult Atlantic walruses in the world at 12,500.

Before commercial hunting of them was banned internationally in the middle of the 20th century, their numbers were threatened by overharvesting for their blubber and ivory.

Andrei Boltunov, from the Marine Mammal Research and Expedition Center, said the Yamal haulout which was first discovered last year but only properly documented last month, showed that the Atlantic walrus population was recovering.

“We want to believe that it’s a positive sign,” said Boltunov, who said there was too little information for now to draw sweeping conclusions however.

According to Boltunov, the Kara Sea’s ice-free season has become longer in recent decades.

Scientists have taken DNA samples and fitted several walruses with satellite tags to monitor their movements for up to several months.

But Boltunov says much work was required to establish what made this particular Arctic beach so attractive for thousands of walruses and what steps could be taken to protect them.

About half of Sun-like stars could host rocky, potentially habitable planets