Republicans Back Trump’s Refusal to Concede, Declining to Recognize Biden 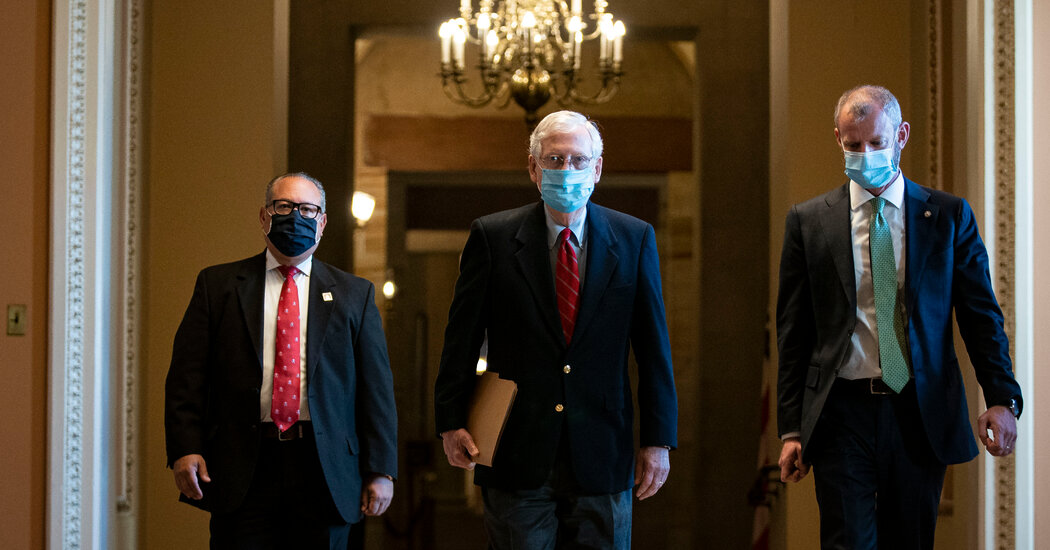 “Our system will resolve any recounts or litigation,” he said.

But he also took the opportunity to torch Democrats, saying they had no right to expect that Mr. Trump would quickly concede.

“At this time last week, small-business owners in cities across America were boarding up their windows in case President Trump appeared to win and far-left mobs decided to reprise their summertime rioting,” Mr. McConnell said. “Suffice to say, a few legal inquiries from the president do not exactly spell the end of the republic.”

Democrats were outraged. Following Mr. McConnell on the floor, Senator Chuck Schumer of New York, the minority leader, said flatly that “Joe Biden won this election fair and square.” He called Mr. Trump’s claims “extremely dangerous, extremely poisonous to our democracy” and warned Republican leaders not to give them oxygen.

“Republican leaders must unequivocally condemn the president’s rhetoric and work to ensure the peaceful transfer of power,” Mr. Schumer said.

A group of 30 former Republican lawmakers, including former Representatives Carlos Curbelo of Florida, Barbara Comstock of Virginia, Tom Coleman of Missouri and Bob Inglis of South Carolina, joined a letter calling on Mr. Trump to concede and accept the results of the election.

“We believe the statements by President Trump alleging fraud in the election are efforts to undermine the legitimacy of the election and are unacceptable,” the group wrote. “Every vote should be counted and the final outcome accepted by the participants because public confidence in the outcome of our elections is a bedrock of our democracy.”

Few elected Republicans have voiced such views, or even offered the traditional recognition of Mr. Biden’s victory and called for the country to move forward. In her statement Monday, Ms. Collins joined just a handful of House Republicans and just three other Senate Republicans — Mitt Romney of Utah, Lisa Murkowski of Alaska and Ben Sasse of Nebraska — in publicly doing so.