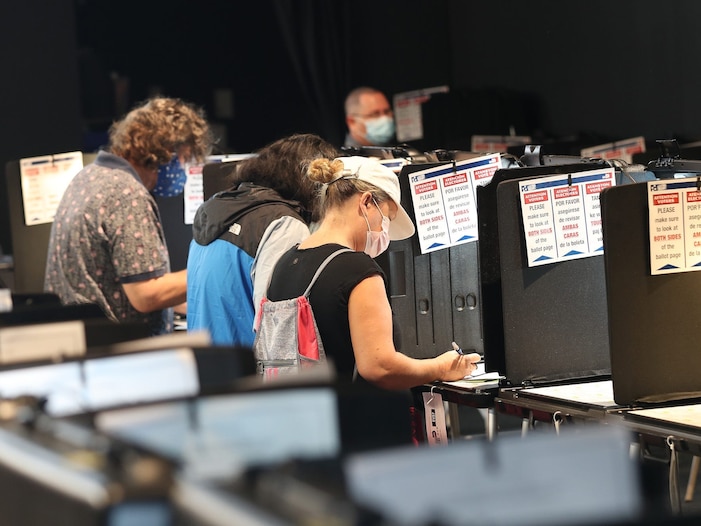 For Democrats, Tuesday night began with a shock that threatened to throw their entire election nights into a depressive tailspin. In the first major call of the night, President Donald Trump, defying almost every high-quality poll of the state, seemed to cruise to an easy win in Florida. Even worse, Trump’s win seemed to be fueled by remarkably strong results in traditionally Democratic Miami-Dade County.

For many Democrats, the announcement that Florida had gone decidedly red kicked off several hours of agony.

Fretting progressives took to Twitter, announcing that Florida would be the beginning of the end. Perhaps the Biden-Harris ticket would underperform everywhere, they speculated, or perhaps Miami-Dade represented the first sign of a mysterious soft spot in the campaign’s digital outreach in the age of coronavirus.

In the end, of course, all that worrying amounted to not much of anything: Florida didn’t indicate some disastrous hidden weakness for the Biden campaign that would play out similarly in states across the union. And if progressives took a moment to analyze the data coming in from the southern tip of Florida, they would have seen a significant reason to celebrate.

On Election Day, the people of Florida voted to raise the state’s minimum wage from $8.56 an hour to $15 an hour. And the Tampa Bay Times reports that “Miami-Dade cast more than 750,000 votes in favor of increasing the wage, accounting for nearly 12% of all ‘yes’ votes” in the entire state.

The fact is that Miami-Dade eagerly passed over the 2020 Democratic presidential ticket to vote for one of the biggest and most unrepentant trickle-downers in American history, and at the same time it also voted decisively for a $15 minimum wage. Joe Biden wasn’t shy about his support of a $15 federal minimum wage — he correctly identified raising the wage in the second and final presidential debate as good for business, even while Trump, despite tons of evidence to the contrary, warned that raising the wage would “put all these businesses out of business.”

Read more: Inside the moment it became clear Trump was the 2016 nominee — as told by Rick Gates, his former deputy campaign chairman and Robert Mueller’s star witness

Perhaps it’s because partisan rancor is at unprecedented, vertiginous levels. Or maybe it’s because there was so much noise around the 2020 election that no candidate could make a compelling policy argument without it getting lost in the Facebook fabrications and hot Twitter takes.

Most likely, it’s because Democrats have traditionally talked about economic policy like it’s a bitter cough syrup that voters have to choke down in order to get healthy. That’s why, even in the middle of a horrific economic downturn, voters still trust Republican candidates more on economic matters — Republicans are better at talking positively about economics, even if they’re promoting unpopular economic policies.

But the truth remains that poll after poll — even voter polls on Fox News — indicate that by a wide margin, Americans love progressive economic policies like a higher minimum wage, a government-run health care plan, and a clear path to citizenship for immigrants.

If you look at the results of ballot measures across the country from election night, you can see that Americans are clamoring for progressive economic policies.

Voters in Arizona, New Jersey, and even deep-red South Dakota approved the legalization of marijuana. People who live in those states will soon learn — as Washington, Oregon, and California voters have already seen — that government regulation can make a product better and safer. They will also discover that the revenue gathered by taxing a product like legalized pot can be put to great use by investing it back in the economy.

Voters also made Colorado the first state in the nation to approve a paid family leave program by ballot measure. The plan, which “require[s] that employers provide 12 weeks of paid time off for childbirth and family emergencies”, was supported by more than 160 Colorado businesses. It’s a great civic product that allows people to fully participate in the economy while also providing the security for them to take care of their families. And businesses supported it because without government assistance, they wouldn’t have been able to provide such a significant benefit to their workers on their own.

Meanwhile, over in Oregon’s Multnomah County, voters approved a progressive income tax on the wealthiest citizens to provide universal preschool. Funded by a small tax on households earning more than $250,000 per year, the program will create good-paying jobs for child care providers and offer daily coverage for every child in the Portland region, with additional hours of free coverage for the lowest-income  families in the area. When those parents can earn more money at their jobs while still providing quality care for their children, everyone will benefit.

Read more: How Trump leveraged years of business losses to give himself a $72 million payday

As I write this, it looks like the incoming Biden administration might have to work with a Democratic House and a Republican Senate, which means many of the largest and most progressive reforms that Democrats were discussing might not be possible on the federal level.

But given the bipartisan success of progressive economic policies on election night, it’s clear that the need for meaningful solutions which match the scale of our biggest problems will only increase.

Those progressive policies are likely to follow the exact same track that the $15 minimum wage did — starting on a city level, expanding to blue states and traditionally red regions before finally seeming almost like an afterthought when it’s accepted on the national stage. As paid family leave and universal preschool spread across the electoral map, even small-government trickle-downers will have to finally recognize the value of progressive economics.

In a special Election Day episode of Pitchfork Economics, political strategist Zach Silk predicted that 2020 would be the beginning of the end for trickle-down Democrats who argue against regulation, taxes on the wealthy, and higher wages for workers. After praising Biden’s full-throated embrace of the $15 minimum wage and a growing bipartisan desire for coronavirus stimulus relief, Silk says other Democrats will have to follow Biden’s lead.

“You do not want to be playing the game on your opponents’ turf,” Silk said. “Every time that we are talking about economics in trickle-down terms, we are playing on our opponents turf.” We already know that progressive economic policies are popular in deep-red states. As Democrats become more skilled at articulating the benefits that those policies provide for everyone, voters will gravitate toward them.

This column was submitted for publication on Thursday, November 5.