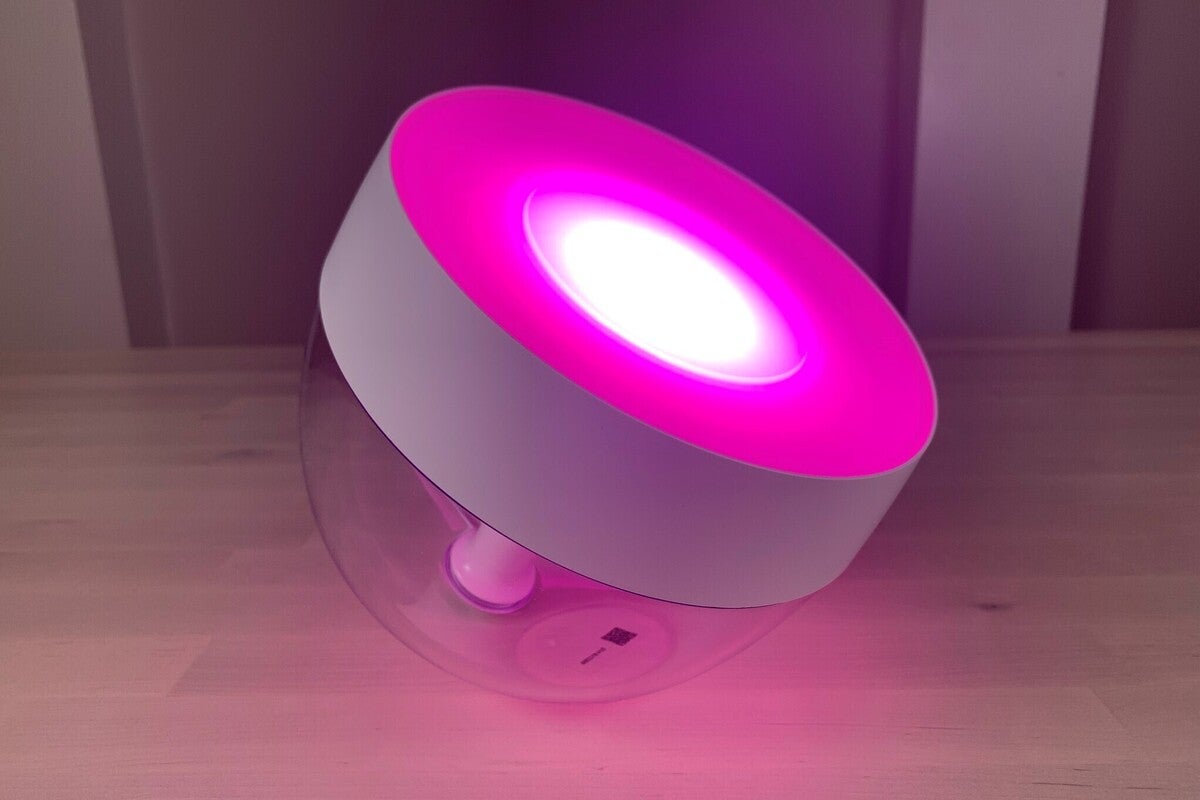 The latest version of the Iris, a smart mood lamp from Signify-owned Philips Hue, cannily improves on the elegant original, upping its brightness, improving its translucent light diffuser and spiffing up the power cable, while adding a Bluetooth radio in the bargain. Capable of working both with or without a hub, the $100 Iris can cast a soothing shaft of color or tunable white light on a nearby wall, while its translucent diffuser glows inside the lamp’s clear shell. A cinch to set up and compatible with Alexa, Google Assistant, and (if used with a hub) HomeKit, the Iris makes for an easy and inexpensive way to warm up a room.

While the Iris has a list price of $100 (or $99.99 if you want to get technical about it), the recently released lamp is only now finding its way into retail channels, so don’t be surprised if you see inflated prices from third-party resellers.

While it’s rated for up to 570 lumens, or twice as bright as its predecessor, the Iris isn’t really meant to light a room or illuminate a workspace. Instead (and like its portable cousin, the Philips Hue Go), the Iris is more of a mood light, casting a white or color glow on a nearby wall.

This review is part of TechHive’s coverage of the best smart bulbs, where you’ll find reviews of competing products, plus a buyer’s guide to the features you should consider when shopping.

About 7.5 inches tall, 7 inches wide, and 8 inches deep, the 1.5-pound Iris feels surprisingly light for its size. The lamp’s translucent diffuser is visible within the Iris’s clear plastic base, allowing the lamp to glow both inside and out.

Available in both black and white finishes, along with a quartet of metallic “special edition” colors (gold, rose, copper, and silver), the Iris’s base has a flat area at the bottom that positions the lamp at roughly a 45-degree angle. Near the base of the Iris is a 6.5-inch, fabric-covered power cable that terminates in a chunky, outlet-blocking 24-watt AC adapter.

Besides its ability to glow in 16 million colors, the Iris can also cast white light that’s tunable from a very warm 2,000 Kelvin to a hazy-daylight 6,500 Kelvin.

As with other new Philips Hue lights, the Iris is compatible with both Bluetooth and Zigbee, which means you don’t need a Hue BridgeRemove non-product link to use the Iris, although you may want to upgrade to a bridge once you discover the limitations of the Hue Bluetooth setup.

For more details on getting a Hue light such as the Iris up and running, check out my review of the new Hue Lightstrip Plus. The short version is that the Iris comes equipped with both Bluetooth and Zigbee radios, which means you don’t necessarily need a Hue Bridge to start using the Iris. With the Hue Bluetooth app on your iOS device or Android phone, you can turn the Iris on and off, change its brightness and color temperature, switch lighting presets, set timers, and create simple, one-time sleep/wake-up routines, no hub required.

Using the Iris with Bluetooth has some serious limitations, however, including the fact that you’ll need to be within 30 feet of the Iris to control it. You also won’t be able to group the Iris in a room with other Hue lights, nor will you be able to control more than 10 lights at a time. And while the Hue Bluetooth app will let you connect the Iris to Alexa or Google Assistant, it won’t let you use the Iris with HomeKit.

Luckily, it’s easy to migrate the Iris to the Hue Bridge to greatly expand its capabilities. Not only can the bridge control up to 50 Hue lights, it can also group them into rooms and “zones.” You’ll also be able to create more elaborate routines and custom schedules, or even control your lights when you’re away from home. Finally, using the Bridge means you’ll be able to add the Iris (or any other supported Hue lights) to HomeKit.

One of biggest challenges presented by the Iris is a creative one—namely, where exactly should you put it? After futzing with the lamp in my dining room and the bedroom, I ended up putting it in a dark corner of my office, where it cast a cool 6,500K glow that simulated a comforting shaft of hazy daylight. (I used the Iris with the Hue Bridge, by the way.)

I quickly adjusted to having the Iris in my office, although I could just as easily have left it in my bedroom, in part to test the lamp’s agility as a nightlight. One of the innovations of the new Iris is that when you set its brightness to just 1 percent, the diffuser glows ever so slightly without actually casting light on the wall, making it perfect for use in an oh-so-gentle wake-up routine.

Besides wake-up and sleep routines, the Iris works with standard timers; for example, I set the Iris to ramp up its brightness to about 50 percent each morning at 7 a.m., and then slowly dim and turn itself off at 7 p.m. each night. Another option would have been to set the Iris to turn itself on and off at sunrise and sunset, or to douse itself whenever a Hue-compatible motion sensor detected that no one was in the room. The Iris played nice with voice assistants as well, obediently changing its colors, brightness, and power states according to my Alexa, Google Assistant, and Siri queries.

The Philips Hue Iris suffers from issues common among Hue lights, including limited Bluetooth support (although it’s nice to have the option at all) as well as a chunky wall wart that blocks nearby outlets. Otherwise, I’m hard-pressed to come up with any complaints about the easy-to-use, handsome-looking Iris, which improves on the original version in pretty much every way.