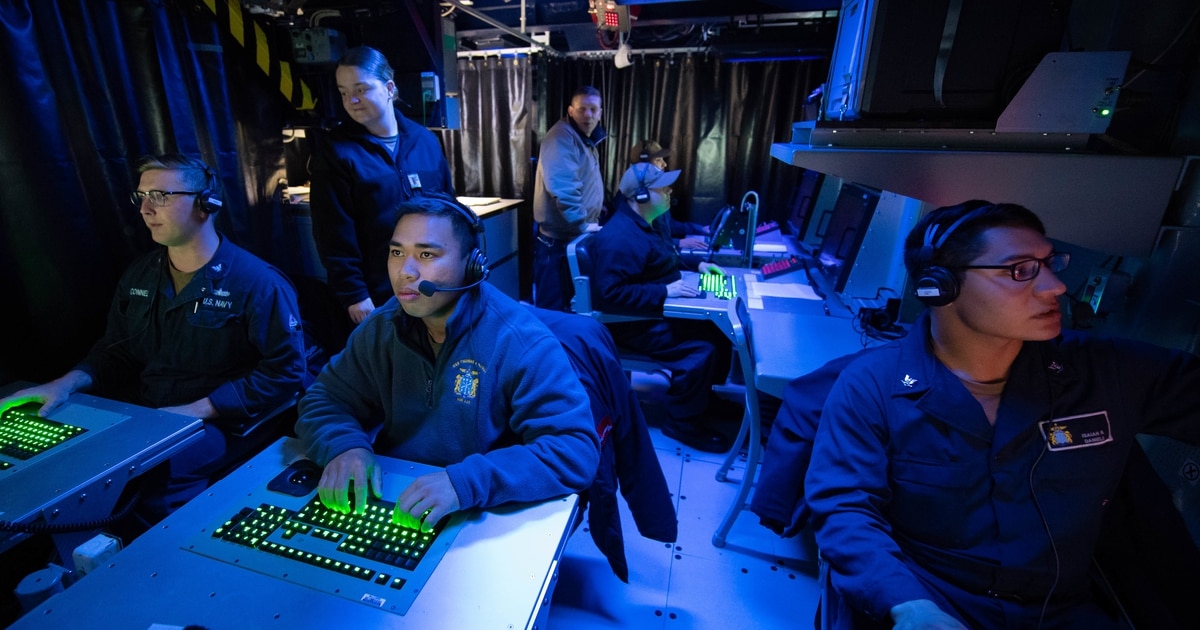 Editor’s note: This is the second article in a four-part series exploring what the Pentagon wants to spend on its future joint war-fighting concept, Joint All-Domain Command and Control, based on its fiscal 2022 budget request.

WASHINGTON — Experts picked up signs in the Navy’s budget about its joint war-fighting priorities despite a lack of details because most related spending lines are classified.

Notably, they pointed to investments in enterprise networking, command and control, and cybersecurity to support the service’s Project Overmatch.

The Navy has provided few specifics about its effort to better connect ships, aircraft and unmanned systems for Joint All-Domain Command and Control. Experts said fleets’ interconnected network structures make them susceptible to devastating interference and could explain the secrecy.

At a late May budget briefing, the Navy said classified research and development budget requests went up. “Project Overmatch with funding in the budget of FY22 has the three R&D lines that also happen to be classified. But those values do increase,” said Rear Adm. John Gumbleton, deputy assistant secretary of the Navy for budget.

Following the top item in the Navy’s unfunded priority list for a guided-missile destroyer, the service listed requests for two networking-related items critical for JADC2: $53.9 million to accelerate naval tactical grid development and $87 million for resilient communications and position, navigation and timing for combat logistics fleets.

“What we did see was there was $50 some million that was second highest unfunded requirement that the Navy was willing to put forth to Congress, which does say a lot,” said Rob Carey, president of Cloudera Government Solutions, vice president of Cloudera Public Sector and former Navy CIO and DoD principal deputy CIO.

In this category, the Navy would spend $5.8 billion for FY22 procurement. That would include satellite communications, enterprise networks, command and control systems, ISR sensors and processor development, resilient precision, navigation and timing systems, electronic warfare systems, counter C4ISR systems, tactical data link systems and cyber, among others. By far the largest chunk of the lot is $1.19 billion requested for enterprise networks.

To really gauge the Navy’s true investments in this space, observers will need to check the Future Years Defense Program projections, Carey said, adding that funding will probably ramp up over the next five years. However, the Biden administration did not release those numbers for this budget request.

“It’s actually, I think, very encouraging to see that language that supports the JADC2 concept and Project Overmatch concept are now making their way into budgets with large dollars attached to them,” she said. “We all know that you follow the money in the Department of Defense and where there is funding placed, that is a very strong signal of senior leadership’s dedication to making sure that these capabilities get put into the hands of our sailors and Marines.”

Bryan Clark, senior fellow and director of the Center for Defense Concepts and Technology at the Hudson Institute, said he saw Navy investments in the budget falling into three broad buckets:

Beyond these three, he said the details stray into the classified realm.

The Navy might have classified much of its funding plan because it views itself as more susceptible to C4ISR disruption than its service counterparts.

Calling Project Overmatch the Navy’s crown jewel and the most important capability the service is pursuing, Clark explained that an adversary could in one fell swoop disrupt the communications chain to cripple the entire fleet, which is much harder to do to an Army unit or an air sortie.

A Navy force is too slow to quickly recompose and doesn’t have the terrain in which to hide itself and regroup, he said.

As a result, the service might be trying to protect its “secret sauce” from adversary eyes, Clark said.

Carey was pleased the Navy decided to classify these items because a war would likely begin with a network attack, and Project Overmatch is all about network architectures.

“War fighting is a pretty sensitive art. This is the network side of war fighting, which you don’t want to reveal because the next war, the first parts of it will not be kinetic, they will be nonkinetic. I think the Navy smartly has classified this,” he said. Adversaries “can exploit the information that’s put out there and then figure out ways to now stymie that development because this is about accelerating war-fighting decisions by providing access to information in disparate places, running AI.”

Acting US Navy undersecretary James Geurts to retire this month