Opinion | ‘The Far Left Is the Republicans’ Finest Asset’ 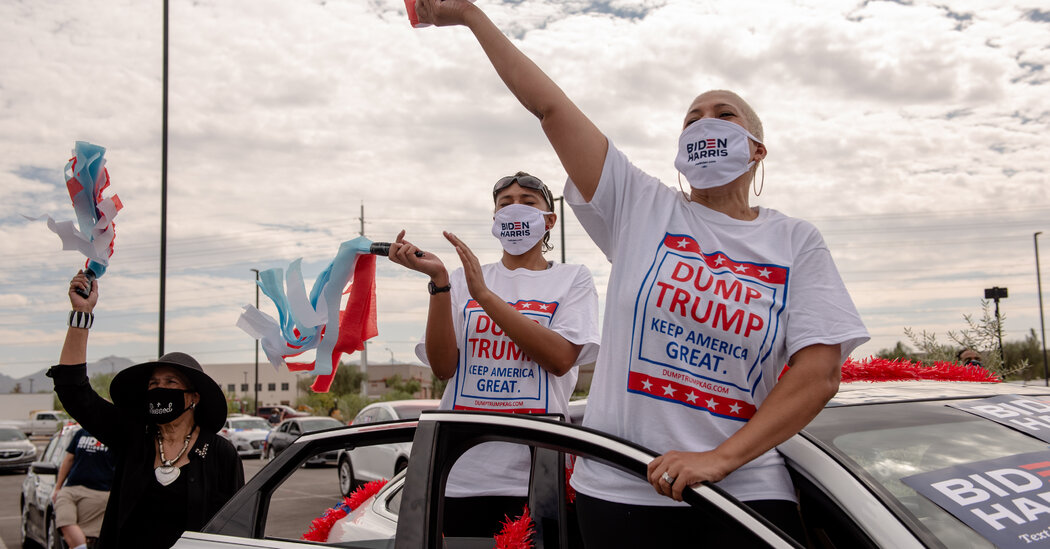 Darren Kew, a professor in the University of Massachusetts-Boston Department of Conflict Resolution, pointed out that the internal tensions within the Democratic Party are exacerbated by polarization between the parties: “Political culture is often that part of the system that is hardest to see — the values, norms, and patterns of behavior that govern our actions within the context of institutions — but it’s the glue that holds it all together,” Kew wrote by email, noting that

20-30 percent of Americans on either end of the political spectrum are getting their information from highly politicized sources and are therefore not agreeing on the basic facts of whether an event has even happened or not.

The left has not remained silent in this debate. On Nov. 10, four key progressive groups — New Deal Strategies, Justice Democrats, Sunrise Movement and Data for Progress — released a seven-page report, “What went wrong for Congressional Democrats in 2020.”

The report observes that Democratic have in the past been wary of “the simple statement ‘Black Lives Matter,’” of “being too closely associated with Colin Kaepernick and Black athletes kneeling during the national anthem.”

In this context, the report suggests,

the latest choice for Democrats to locate our fear and blame is the slogan from many Black and young activists who marched the streets this summer: “Defund The Police.” Conservative Democrats may change the terms and people we blame and fear year-by-year, but Democrats must take on the Republican Party’s divide-and-conquer racism head-on and not demobilize our own base.

The Democratic base, the report contends, was crucial:

This election, the Black youth leading the Black Lives Matter movement have turned their power in the streets into votes and have helped secure Biden’s victory in key cities.

The report turns its fire on the Democratic leadership:

Democratic leadership has failed over the years to make sustained investments in field organizing, forcing grass roots organizations to carry the bulk of organizing work in key battleground states on their own.

The Democratic leadership, according to What Went Wrong, also failed in other ways:

When Democratic leaders make unforced errors like showing off two subzero freezers full of ice cream on national television or cozy up with Wall Street executives and corporate lobbyists while Trump tells voters we are the party of the swamp, it is not surprising that we lose.

The report refers to House Speaker Nancy Pelosi’s late night TV appearance in which she showed off her subzero refrigerator freezer, filled with upscale ice cream bars. The appearance became the subject of a Trump ad that declared:

Not everyone has a $24,000 stocked fridge. Pelosi snacks on ice cream while millions of Americans lose their paychecks, “Let them eat ice cream” — Nancy Antoinette.

The report argues, furthermore, that

scapegoating progressives and Black activists for their demands and messaging is not the lesson to be learned here. It was their organizing efforts, energy and calls for change needed in their communities that drove up voter turnout.

has failed over the years to make sustained investments in field organizing, forcing grass roots organizations to carry the bulk of organizing work in key battleground states on their own.

The authors of “What Went Wrong” acknowledge that “there is no denying Republicans levied salient rhetorical attacks against Democrats,” but argues that

these will continue to happen as they do every cycle. We cannot let Republican narratives drive our party away from Democrats’ core base of support: young people, Black, Brown, working class, and social movements who are the present and future of the party.

Michael Podhorzer, senior adviser to Richard Trumka, president of the AFL-CIO, emailed to voice his across-the-board criticism of all those seeking to place blame for the Democrats’ setbacks in downticket races:

It is far too early to make any kind of comprehensive judgment about the results of the election. But, distressingly, those who had axes before the election are grinding them with cherry picked data points that provide no credible causal evidence for their case.

While Podhorzer faulted all those making judgments, the focus of his critique appeared to be more on complaints from the center/moderate wing of the party:

They are asking us to believe that after four years of colossal disasters, with more than 200,000 dead from mismanaged Covid, with millions waiting without hope for needed relief to continuing mass unemployment, with more than $14 billion in spending, with massive disruptions to established norms and a President who made this a referendum on four more years of the same, what made the difference was this or that position advocated in the debate that neither Biden nor House Democrats endorsed.

Eitan Hersh, a political scientist at Tufts and the author of the book “Politics is for Power,” is not persuaded of the good faith and ultimate commitment of the affluent left. In addition to arguing that “moderate Democrats don’t want their brand tied to progressive policy priorities,” Hersh questioned the depth of conviction of the so-called progressive elite:

Many of the supporters who say they want big liberal policies at the national level don’t really mean it. For example, well-to-do liberals in fancy suburbs who say they prioritize racial equality but do not want to actually level the playing field in educational opportunities between their districts and majority-minority districts.

He cited his own state, Massachusetts:

Here there’s tons of liberal energy and money to support taking big progressive fights to Washington. Meanwhile, our schools are segregated, our transit system is broken, our housing is unaffordable, our police force is a mess of corruption and there’s little pressure being put on the state legislature and governor to fix any of it.

What, Hersh asks, “to make of all this?” His answer: “The push for big progressive policy is something of a facade.”

The political reality, however, is that the constituency Hersh criticizes so sharply has become a crucial part of the Democratic coalition, one that cannot be excised or dismissed without endangering future majorities.