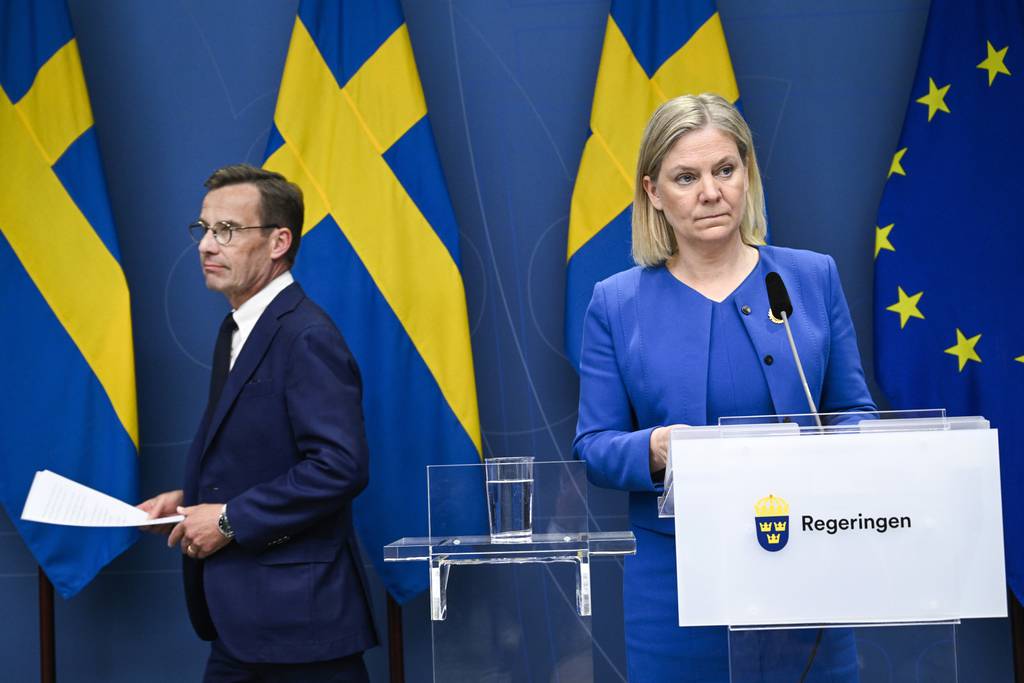 Swedish Prime Minister Magdalena Andersson warned the Nordic country would be in a “vulnerable position” during the application period and urged her fellow citizens to brace themselves for a Russian response.

“Russia has said that that it will take countermeasures if we join NATO,” she said. “We cannot rule out that Sweden will be exposed to, for instance, disinformation and attempts to intimidate and divide us.”

Sweden’s move came a day after the governing Social Democratic party endorsed a plan for the country to join the trans-Atlantic alliance and after Finland’s government announced that it would seek to join NATO.

Moscow has repeatedly warned Finland, which shares a 1,340-kilometer (830-mile) border with Russia, and Sweden of repercussions should they pursue NATO membership. But Russian President Vladimir Putin on Monday seemed to downplay the significance of their move.

Speaking to a Russian-led military alliance of six ex-Soviet states, Putin said Moscow “does not have a problem” with Sweden or Finland as they apply for NATO membership, but that “the expansion of military infrastructure onto this territory will of course give rise to our reaction in response.”

Andersson, who leads the center-left Social Democrats, said Sweden would hand in its NATO application jointly with Finland. Flanked by opposition leader Ulf Kristersson, Andersson said her government also was preparing a bill that would allow Sweden to receive military assistance from other nations in case of an attack.

“The Russian leadership thought they could bully Ukraine and deny them and other countries self-determination,” Kristersson said. “They thought they could scare Sweden and Finland and drive a wedge between us and our neighbors and allies. They were wrong.”

Once a regional military power, Sweden has avoided military alliances since the end of the Napoleonic wars. Like Finland it remained neutral throughout the Cold War, but formed closer relations with NATO after the 1991 Soviet collapse.

After being firmly against NATO membership for decades, public opinion in both countries shifted following Russia’s Feb. 24 invasion of Ukraine, with record levels of support for joining the alliance. The Swedish and Finnish governments swiftly initiated discussions across political parties about NATO membership and reaching out the U.S., Britain, Germany and other NATO countries for their support.

On Sunday, Andersson’s party reversed its long-standing position that Sweden must remain nonaligned, giving NATO membership overwhelming support in parliament. Only the small Left and Green parties objected when the issue was discussed by lawmakers Monday.

Left Party leader Nooshi Dadgostar, whose calls for a referendum on the matter were dismissed by the government, said joining NATO would raise tensions in the Baltic Sea region.

“It does not help Ukraine,” she said.

Andersson said Sweden would refuse nuclear weapons or permanent NATO bases on its soil — similar conditions that neighboring Norway and Denmark insisted on when the alliance was formed after World War II.

During a visit to Helsinki on Monday, Senate Republican leader Mitch McConnell said there is “very significant” support in Congress for welcoming Finland and Sweden to the alliance and that he expects ratification before the August recess.

However, all 30 current NATO members must agree to let the Nordic neighbors in the door.

Turkey voiced some objections last week, accusing the two countries of supporting Kurdish militants and others Turkey considers to be terrorists.

Swedish Defence Minister Peter Hultqvist told public broadcaster SVT that a Swedish delegation would be sent to Ankara to discuss the issue.

Jan M. Olsen in Copenhagen, Denmark, contributed to this report.