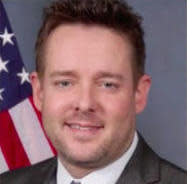 An officer involved in the fatal shooting of Breonna Taylor has filed a civil suit against the 26-year-old’s boyfriend for emotional distress, assault and battery on the night she was killed. The lawsuit claims Louisville Sergeant Jonathan Mattingly experienced “severe trauma, mental anguish, and emotional distress” because of Kenneth Walker’s actions on March 13.

Mattingly and two other officers entered Taylor’s apartment early in the morning that day with a warrant in an attempt to carry out a drug investigation. Walker, a licensed gun owner who said he thought the officers were intruders, allegedly fired a shot that hit Mattingly in the leg. Police opened fire, killing Taylor. Taylor had no criminal record and no drugs were found.

“Walker’s conduct in shooting Mattingly is outrageous, intolerable, and offends all accepted standards of decency and morality,” the lawsuit said, citing one of the legal standards for intentional emotional distress.

Walker was initially arrested and charged with attempted murder over the shooting, but those charges were later dropped. Walker subsequently sued the Louisville Metropolitan Police Department and also sought immunity based on the state’s “Stand Your Ground” law.

“Kenny Walker is protected by law under KRS 503.085 and is immune from both criminal prosecution and civil liability as he was acting in self defense in his own home,” attorney Steve Romines said in a statement obtained by CBS News.

“Even the most basic understanding of Kentucky’s ‘Stand Your Ground’ law and the ‘Castle Doctrine’ evidences this fact. One would think that breaking into the apartment, executing his girlfriend and framing him for a crime in an effort to cover up her murder would be enough for them,” he added. “Yet this baseless attempt to further victimize and harass Kenny indicates otherwise.”

In a statement obtained by CBS News, Mattingly’s attorney Kent Wicker voiced his support for his client. “Mattingly was shot and nearly killed by Kenneth Walker. He’s entitled to, and should, use the legal process to seek a remedy for the injury that Walker has caused him,” Wicker said.

Dozens showed up in pouring rain and bitter cold Thursday night for a “Say her name” march, reports CBS Louisville affiliate WLKY-TV. “Until we get some justice, there will be no celebration. There’s no time for leisure, there’s no time for recreation,” said Aaron Jordan, one of the organizers.

A grand jury indicted one officer in relation to shooting a neighboring apartment, but no officers were charged directly for their role in Taylor’s death. Recently, two grand jurors have come forward to accuse Attorney General Daniel Cameron of misrepresenting their position on potential indictments and not presenting them with the full range of potential charges.

Trump and Biden make final pitches ahead of election