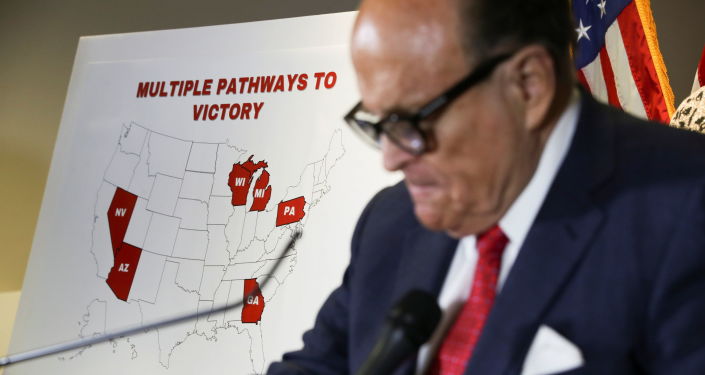 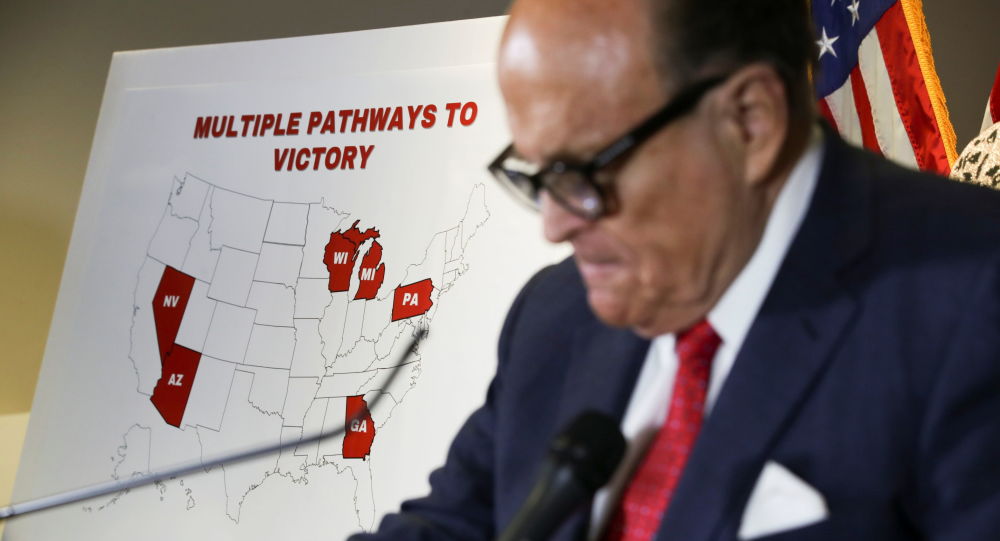 The Trump campaign presented evidence of suspected voter fraud at a press event on Thursday, accusing Democrats in swing states of a coordinated, “centralised” bid to steal the election. The press conference seemed to have been partly derailed by attorney Sidney Powell, who claimed the fraud was a Russiagate-style plot by Venezuela, Cuba and China.

While Donald Trump and his staff continue to pump out more evidence of suspected voter fraud, ranging from charts showing possible vote dumping to illegal coaching of poll workers in major Democrat-run cities, members of his inner circle have grown increasingly disenchanted with the prospects of the allegations going anywhere due to Rudy Giuliani’s handling of the investigation, the Daily Beast has reported, citing senior administration sources.

“The obvious thing is, this is a shitshow,” one advisor reportedly said, calling the Giuliani strategy a “dead end”. “When the Rudy show started, that was a sidelining of everyone else. At that point, it became an issue of going through the motions and the recognition of, ‘OK, this is definitely over because we don’t have a chance with…these conspiracy theories,” the advisor added.

The outlet did not specify which elements of the fraud investigation Trump officials considered to be “conspiracy theories”. However, one element of the Trump campaign’s Thursday press event which raised eyebrows both in the media and online was the allegation by attorney Sidney Powell that the Dominion voting machines involved in the suspected fraud “were created in Venezuela at the direction of Hugo Chavez,” the former Venezuelan president who died of cancer back in 2013.

“What we are really dealing with here and uncovering more by the day is the massive influence of communist money through Venezuela, Cuba, and likely China in the interference with our elections here in the United States,” Powell told reporters at the press conference, adding that the campaign had found a witness in a lawsuit filed in Georgia who was with Chavez and had been briefed how the rigged voting machines worked.

Powell went on to allege that Dominion has an office in Toronto, Canada which it shares with an entity belonging to George Soros, the famed hedge-fund manager turned Democratic Party kingmaker who has been among the most prominent proponents of a globalised, liberal capitalist world order for the past three decades. It’s unclear what role if any Soros, a noted anti-communist, would have conspiring with communist and democratic socialist nations like Cuba, China and Venezuela.

A second Trump administration source told the Daily Beast that although the Thursday press conference was “one of the weirdest f*cking things we’ve ever witnessed”, staff felt they were not allowed to speak about it with the President, who was presumed to have been ‘thrilled’ by the press event.

Powell’s allegations aside, the Daily Beast’s sources did not appear to comment on the other claims made by Giuliani, who said that he had nearly a dozen sworn affidavits and “hundreds of witnesses” across states including Pennsylvania, Michigan, Georgia, Arizona, New Mexico, Wisconsin and Nevada of large-scale manipulations involving mail-in ballots, vote dumping, keeping Republican observers an unreasonable distance back during vote counting ‘due to coronavirus regulations’, etc.

Democratic officials, most US media and even some Republicans have dismissed Trump’s voter fraud allegations, pulling coverage, flagging tweets and accusing the President of undermining the American democratic process and demanding his immediate concession. Courts in multiple states have also thrown out multiple lawsuits by the campaign, sometimes prompting it to launch new, amended suits.

Physicists Pin Down the Nuclear Reaction Just After the Big Bang