Nigeria’s youth finds its voice with the EndSARS protest movement 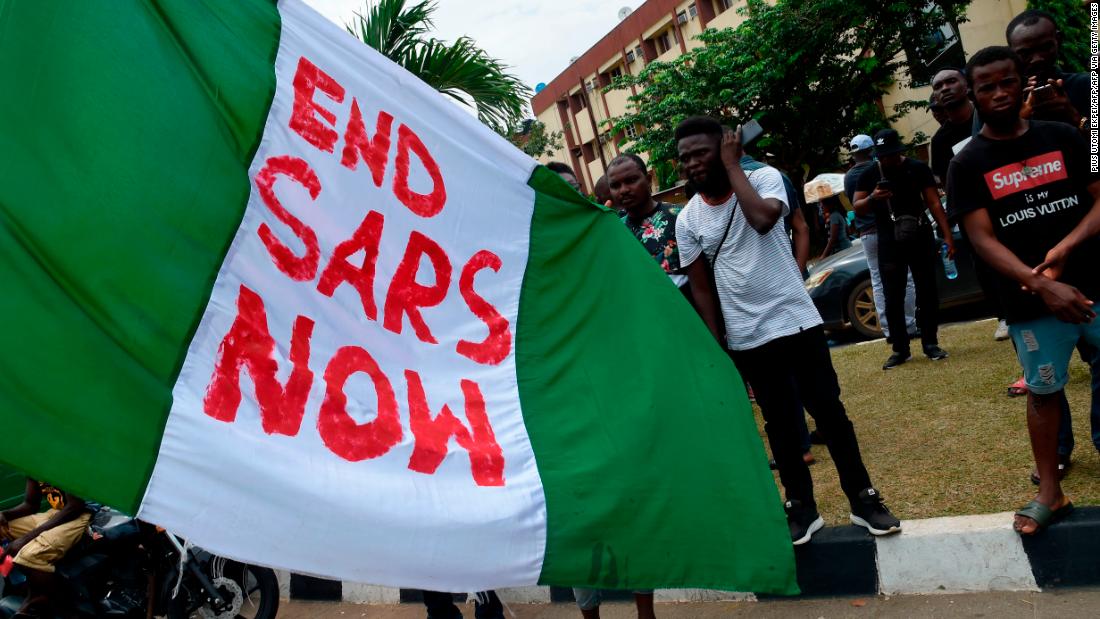 They marched in tens of thousands chanting “Enough is Enough” against police brutality and violence.

The group’s initial demands were for a notorious police unit known as the Special Anti Robbery Squad, or SARS, to be shut down, but the marches have since morphed into protests campaigning for police reform and an end to bad governance in the oil-rich country.

One of the popular chants used during the protests was “soro soke,” which means “speak up” in the country’s Yoruba language.

Economic inequality has reached extreme levels in Nigeria, according to the United Nation Human Rights Commission, while Oxfam reported that in 2019 close to 70% of the country’s population lives below the poverty line.

Young people under 30 make up more than 40% of Nigeria’s population. They face severe hardship and chronic unemployment. According to Chatham House, “If Nigeria’s unemployed youth were its own country, it would be larger than Tunisia or Belgium.”

Now with this protest movement, they are making their voices heard and speaking up against the violence, harassment, and extortion they say they have endured at the hands of SARS officers.

The SARS unit was set up in 1992 to fight armed robbery and was given wide-ranging powers. Many of the officers do not wear uniforms or nametags that identify themselves.

There have been numerous complaints that they had now turned on the citizens and were perpetrating the very crimes that they were set up to combat.

Amnesty International documented 82 cases of police brutality in Nigeria between 2017 and 2020. In a damning report published in June 2020 the human rights organization said people in SARS custody were “subjected to a variety of methods of torture including hanging, mock execution, beating, punching and kicking, burning with cigarettes, waterboarding, near-asphyxiation with plastic bags, forcing detainees to assume stressful bodily positions and sexual violence.”

Complaints about SARS are not new. People have been speaking out online since 2017 about the unit, and there have been several, unsuccessful attempts by the government to scrap it, but the catalyst for the recent nationwide protests came in early October when reports surfaced in local media that police had attacked a young man and driven off in his luxury jeep.

It sparked the use of the #EndSARS hashtag and two popular musicians, Runtown and Falz, decided to hold an offline march to air their grievances.

Falz, whose real name is Folarin Falana, said they were expecting “a handful of people,” but were surprised when hundreds, including other celebrities, turned up.

“Everyone is dissatisfied and the government’s failing to react to this level of outcry is sheer disregard for the people. this administration is very insensitive,” Falz told CNN at the time.

Soon, the movement mushroomed organically around the country as years of frustrations and anger boiled over among the disenfranchised youth.

“Nigeria is facing a reckoning, one that is long overdue,” said Yetunde Omede, a professor of global affairs and politics in New York.

“With a growing youth bulge of under 30 years old, Nigeria can no longer ignore the demands of young people.”

During the protests, participants erected tents and DJ booths at various sites across the country.

Some camped overnight outside the Lagos State Assembly, while others chanted ‘Solidarity forever,’ sang the national anthem repeatedly and held multi-faith prayer sessions as well as a “festival of lights,” to honor the dead, held at the now infamous Lekki toll gate.

“This is an awakening of Generation Y, who are under 35, and will have a significant impact on the political landscape, analyst Amaka Anku, who heads the Africa Practice at Eurasia Group, told CNN.

“I think the movement will define political consciousness. It will lead to a higher turnout in 2023 and helped define campaign issues for the 2023 election,” Anku added.

The movement itself was not just about police brutality, says Omede.

“It is years of ongoing social trauma caused by inadequate healthcare systems and institutions of education, systemic corruption, nepotism, electoral fraud, poverty and more,” she said.

“The EndSARS movement was the tipping point.”

Not surprisingly, the EndSARS protests in Nigeria have been compared to the Black Lives Matter fight against police brutality in the US.

It has attracted massive global support with solidarity protests in UK, US, Germany, and other parts of the world.

Celebrities such as Kanye West, John Boyega and Rihanna among a host of others gave their support, shining a global spotlight on the #EndSARS hashtag.

Twitter CEO Jack Dorsey tweeted about the movement, while his platform gave verified blue tick status to some who were prominent in it and created an #EndSARS emoji symbol.

There was no discernible leadership in the decentralized structure of the movement and the young people were quick to reject any person who tried to insert themselves as a leader because they feared being compromised.

Women have taken a leading role in powering the marches and the phenomenal Feminist coalition raised nearly $400,000 to fund the different protests springing up around the country.

They posted real-time accounting of their expenditure on Twitter and quickly won praise for their openness and accountability, something Nigerians have long demanded from their leaders.

In addition, the movement provided free medical assistance for those injured in the protests and rapid response volunteer legal assistance to help free those arrested, while also doing some CSR along the way, including raising money to buy prosthetic limbs for two amputees who joined the marches on crutches.

One of the protesters, who wanted to be known only as CM, because she says she has received multiple threats, told CNN: “We are united as Nigerian youths. It has been the most, scary fearful, heart breaking time but regardless of class, tribe and all of that, we came together to say we don’t want to be killed, extorted, harassed, brutalized.

“One thing I have gotten out of this entire thing is that the moment people come together, they can achieve anything,” she added.

The global support and strength of the #EndSARS movement clearly rattled the establishment who have responded with brute force and a level of violence that has led to anger and global condemnation.

On Tuesday, October 20, protesters sitting and singing the national anthem say they were barricaded on either side of the Lekki toll gate and fired upon by Nigerian security forces.

Figures from Amnesty say that at least 12 people died.

DJ Switch was live-streaming the protests on her Instagram page when the shooting happened.

She told CNN: “I’m heartbroken. There was no warning. We just heard gunshots and the soldiers came in guns blazing. It’s the worst thing I have seen in my life. They were just shooting like we were goats and chickens.”

The Nigerian army has posted that the reports are “fake news.” The army has not responded to multiple requests for comment from CNN.

Even before Tuesday’s shooting, protesters had faced teargas, water cannons, and live ammunition during their peaceful marches.

Even as Nigeria’s Inspector General of Police (IGP) Mohammed Adamu announced the dissolution of SARS — for at least the fourth time in four years — protesters were being dispersed with tear gas, water cannons, and live bullets.

Aisha Yesufu, 45, is a veteran activist who campaigned for the return of the kidnapped Nigerian Chibok girls and joined the protests in Abuja very early on.

She is at pains to point out that the movement is being led by “the youth of Nigeria,” and that she is “just giving them moral support.”

However, few can forget the image of her, fists clenched in the air, and standing defiantly as she faced down the police in the country’s capital Abuja on October 10.

“I raised up my hand and clenched fist and started walking back slowly, they were shooting at me,” Yesufu said.

“I braced myself for the impact and they were throwing tear gas. I said to myself, ‘no matter what I am going to go down standing’. I was bracing myself for the pain that would come from any impact,” she added.

CNN reached out to the Nigerian police force for comment on the allegations against the officers. Lagos state spokesman Muyiwa Adejobi said all complaints against its officers are carefully investigated and appropriate sanctions applied to offenders.

Several states across the country have also instituted judicial panels to investigate allegations against police officers.

A government under pressure

Instead, he issued a thinly veiled threat to young people to get off the streets and stop the protests. The speech was poorly received and many said it failed to show empathy or any accountability for the deaths of Nigerians.

In the aftermath of the speech, many Nigerians said they were left feeling deflated and in typical fashion, they responded online with humor to mask their disappointment.

As for the End Sars movement, they are taking Buhari’s message seriously and say they are halting the physical protests to focus on online agitation.

CM told CNN: “Protests have ended but we still have a lot of questions about people who lost their lives. The movement is not ended.”

“Now we have to think about it a little more strategically because we don’t want people to lose their lives anymore. We don’t want anyone else to be in danger.”

After Buhari’s speech, the Coalition of Protest Groups released a statement saying they were still determined to press on for a better Nigeria.

“For the sake of the wellbeing of our comrades and ordinary citizens being adversely affected by this, we will deprioritize the physical protests, for now,” the statement said.

“But, for the sake of those who died, before the protests, during the protests, and at the hands of Soldiers at the Lekki Toll Gate — people who the government has largely refused to acknowledge, THE STRUGGLE MUST CONTINUE.”

The movement, which has been described as “hydra-headed” may have had one of its heads cut off for now. But it has certainly now a force to be reckoned with, and one that has given Nigeria’s youth a chance to be heard.

africaEndSARS: How Nigeria's youth found its voice with the protest movement. - CNN
46
Share

How Biden has more paths than Trump to 270 electoral votes

Jezero Crater Was a Lake in Mars’ Ancient Past