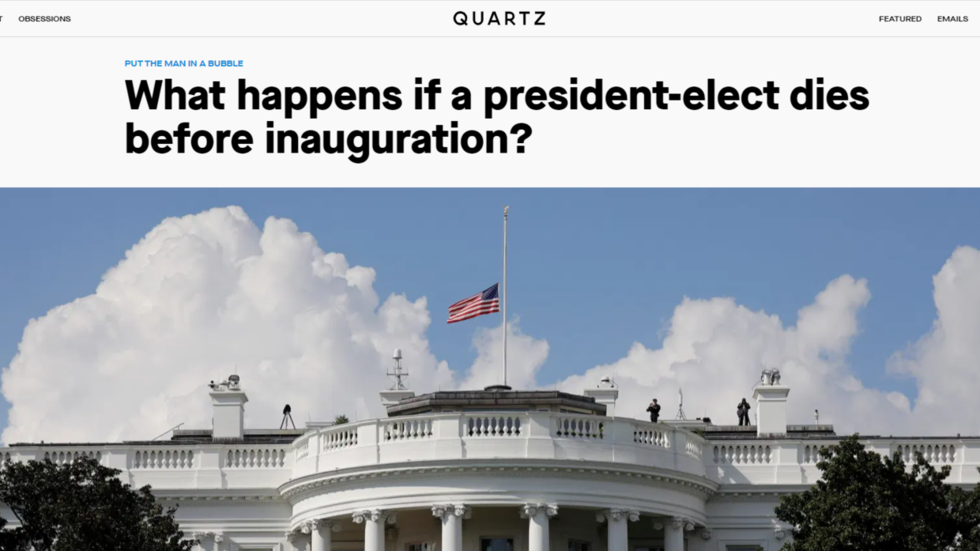 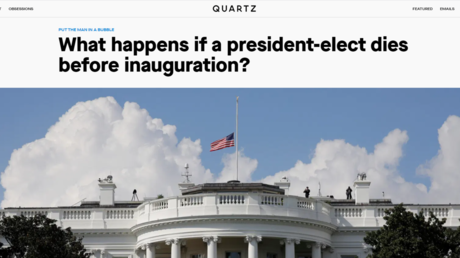 Business-focused US media outlet Quartz has gone into damage-control mode, apologizing for tweeting an explainer about what happens if Democratic candidate Joe Biden dies before inauguration just as the press called his victory.

“It may seem morbid, but given that Biden, at 77, will be the oldest president-elect in history and is running in the midst of a pandemic, it’s worth clarifying what would happen if he dies before taking office,” an article by Tim McDonnell, Quartz’s climate reporter, said just minutes after CNN and other media outlets declared Biden the victor.


While President Donald Trump supporters and some conservative outlets like Fox News have voiced concerns about Biden’s cognitive state, as he stumbled through a litany of mental gaffes on the campaign trail, mainstream media, with few exceptions, have largely shunned the issue.

So when left-leaning Quartz raised the question of a Biden’s premature demise on Saturday, it was instantly hit with backlash and hurried to repent.

The media outlet scrapped its Twitter message with a link to the article and posted a new tweet saying, “We hoped to help those searching for the answer to this question. It was posted to our Twitter account in error.”

We deleted an earlier tweet of a story explaining what happens if the president-elect dies before taking office. We hoped to help those searching for the answer to this question. It was posted to our Twitter account in error.

There was no explanation as to why or how the original tweet was erroneous. The tweet showed a picture of the White House and asked the same question raised in the article that it was promoting: “What happens if a president-elect dies before inauguration.”

The apologetic tweet apparently failed to placate those who were offended.

Also on rt.com
Media ramps up campaign to get Biden out of debates with Trump, offering various excuses other than their candidate’s failing mind


“Sure it was (an error). This tweet is the same as what you deleted, with a tacky apology. Still disturbing,” a commenter said.

While the Biden campaign sought to downplay the issue, arguing that he is in perfect shape, most Americans – including nearly half of Democrats – had doubts about Biden’s health. A Rasmussen Reports poll in August showed that 59 percent of likely voters believed it was likely that Biden wouldn’t be able to finish a four-year term as president. Even among Democrats, 49 percent said it was likely that vice-presidential running mate Kamala Harris would need to replace Biden at some point in the term.

While some Quartz readers were offended by the question over Biden’s hypothetical death, at least one observer said he still wanted to know the answer, as he’s “legit concerned” about what would happen.

What *is* the answer to that question? I’m legit concerned

The answer, as Quartz explained, is that if Biden were to die before December’s electoral college vote, the Democratic National Committee could name a replacement – presumably, but not necessarily, Harris – and urge the Biden-backing electors to vote for that person. If Biden were to die after Congress certifies his election in early January but before the Jan. 20 inauguration, Harris would replace him.