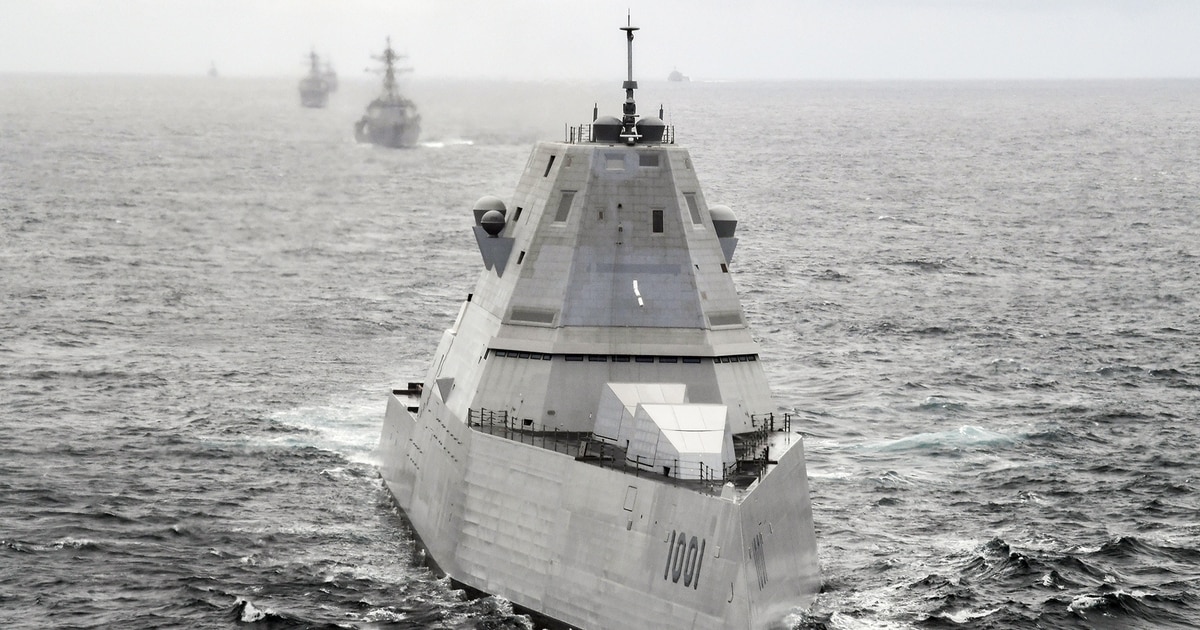 WASHINGTON – 2022 will be a big year for the Zumwalt-class destroyer program, as first-in-class Zumwalt and sister ship Michael Monsoor continue finding their place in the fleet – and perhaps make a debut at a major naval exercise, the head of the surface navy told reporters today.

Vice Adm. Roy Kitchener, the commander of Naval Surface Forces, said at the Pentagon that the surface fleet was already bringing in some new technology for high-end warfare and would see several significant additions in the coming years – most notably the Zumwalt DDGs fielding hypersonic missiles – and that his force was working hard already to pave the way for fleet introduction of all the new warfighting assets.

Specifically on the DDG-1000s, he said Surface Development Squadron-1 (SURFDEVRON) had already done some work on the ship’s tactics but that over the next year the Navy needed to start “getting some employment out of that ship, getting it out on an exercise probably next year.”

The hypersonic weapon, also called the conventional prompt strike (CPS) missile by the U.S. Navy – is “a pretty powerful weapon with its capability, and we can’t get into them all here, but if we could get some employment from that ship and get out there and prove some concepts” then the Navy would be ready to deploy faster once the missile is through development and testing in the 2025 timeframe.

Kitchener said later in the media roundtable that “we want to operate this ship in either RIMPAC or Valiant Shield or something like that,” referring to the biennial international Rim of the Pacific exercise in Hawaii that’s followed by the U.S.-only Valiant Shield in the Mariana Islands. “We’ll work the ship through the basic phase of training and we’ll make sure it’s manned, trained and equipped to do that mission, but I think that’s what we want to do with Zumwalt. And we’ll probably get Michael Monsoor in the mix as well,” Kitchener said, adding that he’s already discussed the idea of using the DDG-1000s in these exercises with Navy leadership.

Though the hypersonic missile won’t be ready for another four years – the Army will field it first from ground-based launchers in the 2023 timeframe, but integrating the missile with a Navy launcher that can be used from both the Zumwalt destroyers and from Virginia-class attack submarines will take additional time – Kitchener said there’s still a lot to be learned about the Zumwalt hull itself before any kind of strike mission can be applied.

Using Zumwalt and Michael Monsoor more intentionally over the next year will help SURFDEVRON validate tactics, techniques and procedures (TTPs) they’ve written for the three-ship class, and it will allow the crews and the Navy to get more experience with many of the unique systems onboard.

“Don’t forget, Zumwalt not only sports a whole bunch of new combat systems capability, there’s a lot on the electric drive and things like that, and helicopter operations and the way things work, that we really need to get out and understand. I mean, we have somewhat in the operations we’ve done – we’ve taken it up north in the heavy weather stuff and some other areas, and so we’re learning a lot, but I really want to learn more so when we come out and get CPS, we’re that further ahead,” Kitchener said.

He said the hypersonic missile itself had a “viable path” in development with the Navy and Army and appears on track for 2025 fielding in the surface fleet.

Around 2025, the DDG will have to go to a shipyard for “a big refit or an overhaul” to receive the launcher system.

“That’s a big lift, that’s going to be big. So the idea is, like I talked earlier, let’s get [the ship] out there, learn about how to employ the thing, how we want to operate it, develop some TTPs, and then bring it back, bring it into the availability and get that retrofit done, so when they come out we’ll be ready to use it,” Kitchener said.

Though not fully validated, he said one of the ideas he’s thinking about with the Zumwalt class is how to balance training, operations and maintenance in a way that makes most sense for the three-ship class with a highly specialized strike capability.

Arleigh Burke-class destroyers go through a 36-month Optimized Fleet Response Plan (OFRP) cycle of training, a deployment, readiness sustainment and then maintenance, which aligns with the aircraft carriers they often deploy with.

Zumwalt may be quite different.

One idea is to put the DDG-1000s through basic training and then advanced training, and then give fleet commanders a 24-month window to operate the ship as needed, with perhaps some small maintenance work done here and there throughout that time. Then the ship could go through a bigger maintenance period and start the cycle over again.

“Right now we’re in development, but that’s kind of what we’re thinking for DDG-1000,” Kitchener said.

Zumwalt and its hypersonic weapons aren’t the only leap in capability coming to the surface fleet soon. Chief of Naval Operations Adm. Mike Gilday said this week in a virtual Sea Air Space presentation hosted by the Navy League that major changes were coming by 2025.

“On the sea, we’ll be just at the cusp of delivering our first Constellation-class frigate. We’ll be delivering the DDG Flight IIIs in earnest. And we are investing in a longer-range weapon, the Maritime Strike Tomahawk, which gives us range and speed to reach out and touch an adversary. And then lastly by 2025, we believe if we stay on path that we’ll be delivering the Zumwalt-class destroyers with a hypersonic missile capability,” Gilday said.

Asked what the surface fleet was doing now to prepare for that whole range of capability upgrades mid-decade, Kitchener said training was becoming more sophisticated all the time, so the fleet is accustomed to high-end warfighting scenarios and can more easily start using the improved missiles, the DDG-51 Flight III’s improved combat system and radar, and other new capabilities once they are ready for fielding.

Ahead of deployments, ships go through an advanced training phase that now includes a “live fire with a purpose” missile shot for every ship or unit, as well as a composite training unit exercise (COMPTUEX) that has grown more sophisticated to prepare strike groups for realistic scenarios they could face in places like the South China Sea or North Atlantic.

“The scenarios become more and more challenging – we just did one, again, with supersonic targets. So that is every ship going forward, that is LCS to our cruisers to our carrier,” Kitchener said of live fire with a purpose.

“As we continue to integrate more and more technology into the things we’re doing, [pre-deployment training] has been where we’ve put a lot of focus,” Kitchener added.

Additionally, as new sensors and weapons come online, they’re being added into the Navy’s virtual trainers at fleet concentration areas.

As for the new sensors and weapons themselves, Kitchener didn’t mention many specifics, but he said the surface fleet was learning how to leverage an upgraded version of the Naval Strike Missile, an electronic warfare upgrade and new anti-submarine warfare tools.

The new 1A variant of the Naval Strike Missile is already fielded on the Independence-variant LCSs currently deployed to the Western Pacific, he said, as U.S. 7th Fleet and the Navy are “looking for more ways to get more stick out there” in the vast Pacific region. With the increased performance of the missile, Kitchener said, the Navy will have to find ways to get more and farther-out targeting data to the LCSs so they can make the most of the new range they have – including through using unmanned systems to send back targeting data to the LCSs.

7th Fleet “really likes them to operate in the littorals out there in the first island chain, so I think putting the strike missile on there was key, and we’re looking for some more lethality there. And that’s really, when I talked earlier about our ability to bring in more targeting data and stuff like that, those are some things that I think we’re thinking about with LCS.”