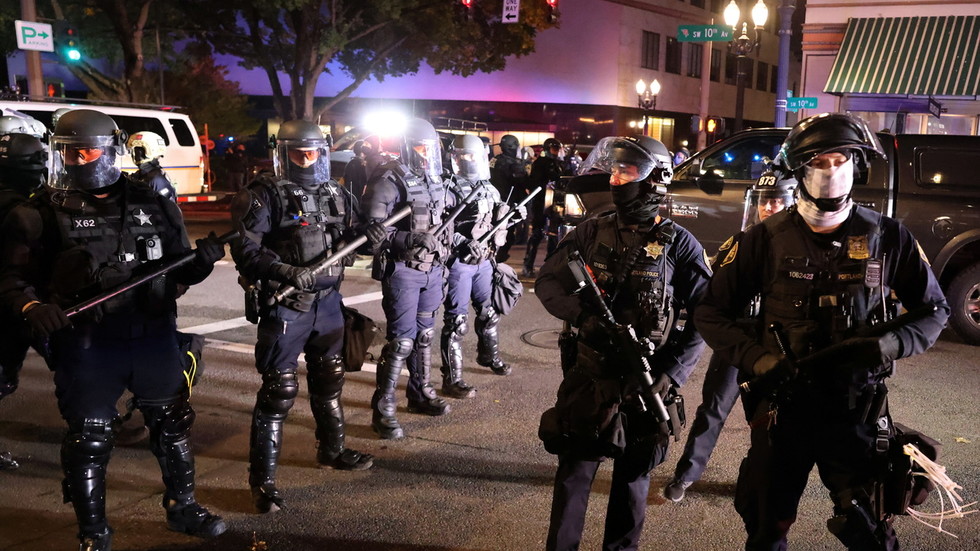 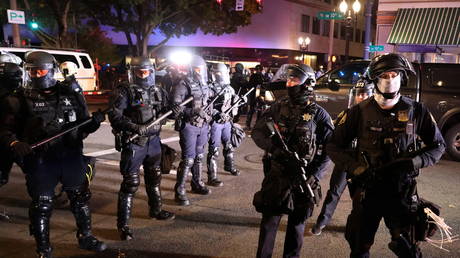 National Guard soldiers will be deployed in Portland as protests in the city descended into “widespread violence,” police said soon after declaring a riot, with demonstrators seen smashing storefronts and scuffling with officers.

“The Unified Command declared a riot in downtown Portland as one of two groups marching tonight started breaking windows and committing other crimes. The sound truck has given a warning that rioters are subject to arrest and use of teargas,” Oregon State Police spokesman Captain Tim Fox said in a video statement.

Due to the widespread violence occurring, Governor Kate Brown, under the advice of the Unified Command, has activated the use of the Oregon national guard to assist law enforcement in the interest of public safety.

Fox did not specify when the Guard unit would arrive in the city, however Brown’s order, issued on Monday, required troops to remain on standby in the event of post-election turmoil.

Footage circulating online showed protesters squaring off with police clad in riot gear and military-style uniforms, some making arrests. In one clip, a swarm of officers is seen closing in on a small group of demonstrators at a street corner.

Other videos captured acts of vandalism, including one protester who spray painted an ATM as another berated journalists filming the scene, shouting “get your cameras off of these protesters!” According to one local reporter documenting events on the ground, Brenna Kelly, individuals also attempted to smash the windows of a Starbucks adjacent to the ATM.

In hopes of preventing further vandalism, security guards were also seen hastily boarding up storefronts as the demonstration passed by.

At least two separate protest marches made their way through Portland on Wednesday, one of which began as a ‘Count Every Vote’ rally, mirroring similar actions in cities around the country one day after the 2020 presidential election. Captain Fox noted that one of the marches grew to around 250 people, though only described criminal activity for the smaller action downtown. He also spoke of rumors of protesters “carrying firearms,” but noted those reports remained “unconfirmed” and that police had not learned of any specific “threat of violence” at either demonstration.

#CountEveryVote marchers arrive after holding back to a pre-planned event in Tom McCall Waterfront Park. The marchers we started out with are now gathered in the street.A car caravan is somewhat worrisomely blocking exit from a #Portland Fire & Rescue. pic.twitter.com/mMkEIU6vU9