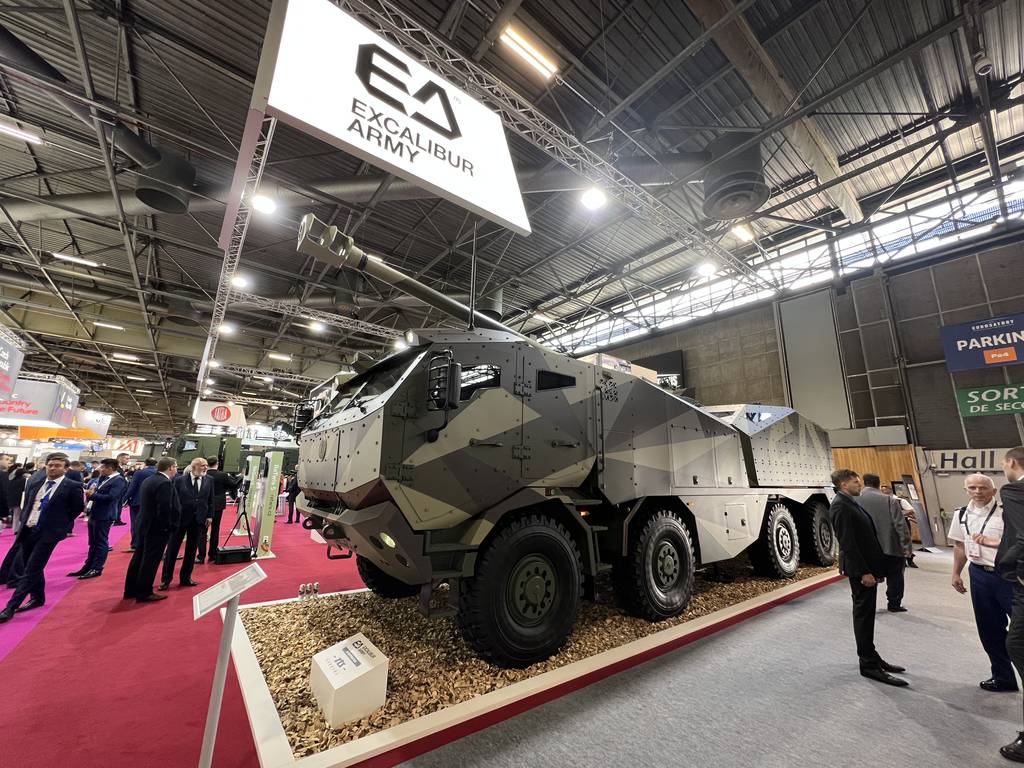 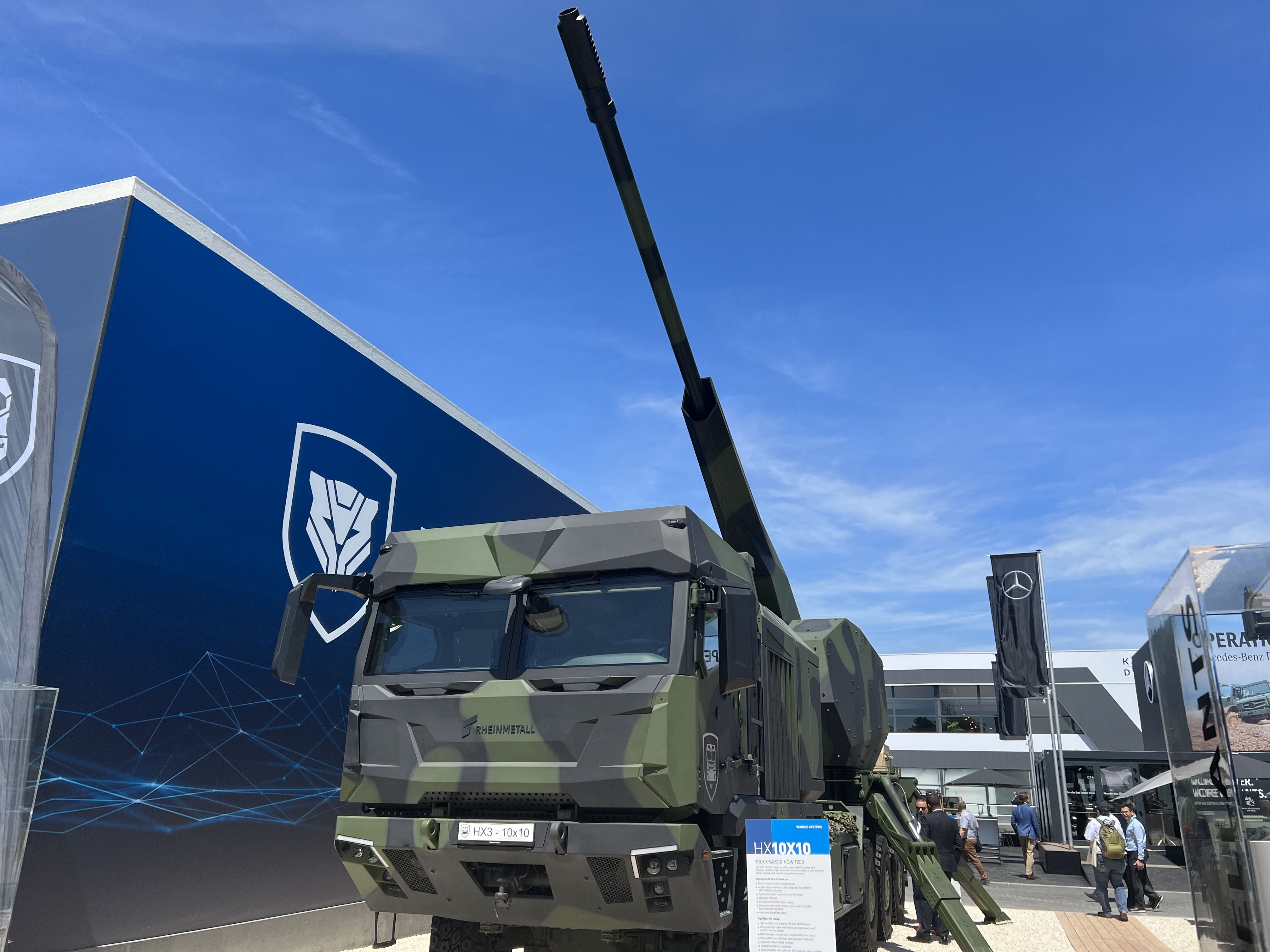 PARIS — The producers of 155mm mobile howitzers are seeing an uptick in interest from European countries in the wake of Russia’s invasion of Ukraine, with the most recent biennial Eurosatory defense expo taking on an artillery-centric approach.

The show, held last week in Paris, featured companies from all over the world displaying 155mm howitzers that are either in operation or in their concept phase.

In recent years, Eurosatory has emphasized robotics, artificial intelligence and other burgeoning high-tech capabilities, but this year the focus was on heavy artillery, armor, firepower and unmanned aircraft capable of targeting and providing intelligence, surveillance and reconnaissance — capabilities the Ukrainian military needs right now.

The country had committed to buying more Archers through the signing a letter of intent at Eurosatory, which took place in front of an Archer system on display at the manufacturer’s outdoor display. The letter marks the first step to establish an additional artillery battalion in line with Sweden’s current defense strategy, which runs through 2025.

The British defense company recently finished delivering the first 48 Archer vehicles to the Swedish Army. The system has been fielded for five years.

Meanwhile, the Archer was selected as one of two contenders in a competition for a new mobile howitzer in Switzerland last week. The other contender was not made public. The country is looking to replace its aging howitzer, which is based on the M109 platform.

BAE Systems’ vice president of platforms and services, Mark Signorelli, told Defense News at the show that since Russia invaded Ukraine on Feb. 24, the company has seen an increase in inquiries of the Archer system.

Along with the American-made M777 howitzers and British FH70 howitzers, Ukraine is also expected to receive the Caesar from France.

At Eurosatory, Nexter signed on another country — Lithuania. The country’s defense minister announced he was visiting Paris to sign a letter of intent with his French counterpart to buy the system.

Since the Russian invasion of Ukraine, “the trend that we notice is that some prospects had initially wanted a certain number of guns, and now they are asking for — in most cases, not every case — in most cases they have increased the number,” Olivier Fort, the director of Nexter’s systems and programs business unit, told Defense News at the expo.

The fight in Ukraine is magnifying the need for howitzers to be highly mobile, Fort said, as Russian forces are able to determine the location of artillery systems once Ukrainians fire them.

Reports show Ukrainians are camouflaging the older, less-mobile systems currently in stock. But a highly mobile howitzer, for instance, would be able to relocate before Russians could detect its position. Caesar and other systems like it can fire and move out of the area in just a few minutes.

Artillery is also an attractive capability, Fort noted, as they’re less expensive to replace than tanks.

Directly across from Nexter’s Caesar stood a demonstrator vehicle developed by German company Krauss-Maffei Wegmann for future indirect fire. Nexter and KMW embarked on a joint venture called KNDS in 2015.

The company claims the vehicle — a Boxer chassis with a 155mm gun that uses 52-caliber rounds — can fire on the move and engage moving targets. The vehicle also comes with an automated gun loading system. The gun can fire eight rounds per minute with a two-person crew.

Another German company, Rheinmetall, displayed a truck-based 155mm howitzer demonstrator using the same chassis it plans to submit for the U.S. Army’s Common Tactical Truck competition. The service plans to kick it off after a request for proposals is released by month’s end.

The HX3 10-wheel drive chassis supports a 155mm gun with a 360-degree capability. The vehicle, according to an information card by the system at the show, is highly mobile, particularly when it comes to off-road performance.

Tucked against a wall in a more remote area of the large exhibition space sat a new product: a 155mm mobile howitzer developed by Czechoslovak Group subsidiary Excalibur Army. Dubbed Morana, the weapon features a chassis from Czech company Tatra, enabling the vehicle to cross terrain typically only suitable for tracked vehicles, according to information displayed alongside the platform.

The system is designed to fire 52-caliber munition with a range of 41.5 kilometers (25.8 miles). The crew can carry 45 rounds, and the vehicle comes equipped with fully automated gun loading, allowing crews to fire six rounds in one minute. The vehicle can travel 90 kph (56 mph) and fits three crew.

Poland last month donated 18 Krab howitzer systems — which are K9s built in the country — to Ukraine and then signed on to increase K9 production. Earlier this month, Poland agreed to sell Ukraine an additional 54 units.

A team led by Hanwha is also competing in a British program to replace the country’s AS90 with a mobile fires platform in late 2023. That team, dubbed Team Thunder, includes Leonardo UK, Pearson Engineering, Horstman Defense Systems, Soucy Defense and Lockheed Martin UK.

Several of the systems on display at Eurosatory underwent evaluation by the U.S. Army last year at Yuma Proving Ground, Arizona, including the Caesar and Archer. Elbit Systems of America, a subsidiary of Israeli company Elbit Systems, was chosen to bring its Autonomous Truck Mounted Ordnance System Iron Sabre to the evaluation. Florida-based business Global Military Products brought in its Serbian partner Yugoimport’s NORA B-52 155mm wheeled howitzer for the shoot-off as well.

But following the evaluation, the Army did not choose a system.

The service is studying how its fires formations are going to look, but it hasn’t yet made a determination on that force structure, or where and what capabilities will lie within that. Several participants noted the shoot-off will supply data to help the Army figure out a path forward.

When pressed, high-ranking Army officials, including the chief of staff, have said there is a need for artillery systems but that the service is prioritizing the development of other capabilities, most importantly its Extended Range Cannon Artillery system.

“I think we need to make artillery great again, and we will,” Army Chief of Staff Gen. James McConville said at an Association of the U.S. Army breakfast near Fort Belvoir, Virginia, in March. When you look at large-scale combat operations, “you need to be able to mass artillery.”

Speed and range “becomes so critical,” he added. “So within the force, we’re growing artillery, we are growing air and missile defense.”

The Army has prioritized long-range fires, including hypersonic weapons, the Precision Strike Missile, and the extended range cannon artillery system. But McConville noted that “we only have so much resources.”

Marine Corps artillery ― it isn’t too late to salvage it